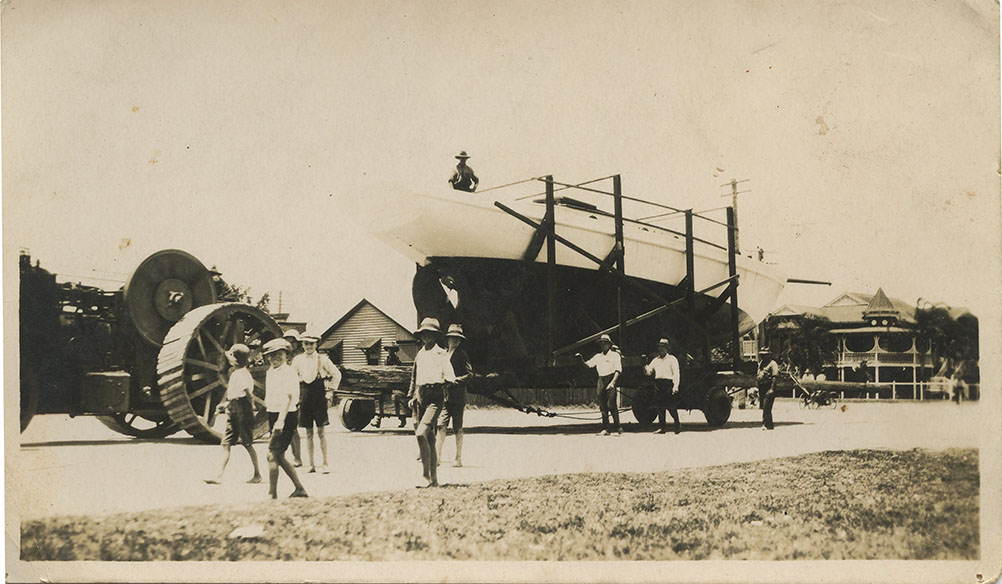 Towing Amalia with Ivan at the rear to the right

My grandfather, Ivan Jones, was a dentist living at Bundaberg in the early 1920's when he decided he wanted to build his own yacht to sail along the reef.

As far as I can work out, he would have had little or no previous building or woodwork experience, or for that matter sailing/navigation knowledge. His father was a Methodist minister, doing three year postings mostly around north west Victoria.

Anyway, the story my father always told was that Ivan went out into the rainforests with a saw miller and chose which trees to cut down and mill for the build. He started to build the boat on the verandah and then finished her in a large shed, which was pulled apart to release her. She was then towed in 1928 or 29, by steam traction engine to be launched in the Burnett River at Bundaberg and named Amalia, after Gota Amalia Melba Adelskold, his wife and my grandmother, she had Swedish parents.

My father would have been 4 or 5 years old when he started sailing in Amalia. He and his father did many journeys along the reef and for dad the sea became the love of his life, joining the Navy at the age of 13, just to be able to be at sea. Sadly Ivan had to sell the boat at this time, around 1938, and a Mr John Corbett Jones of Cabbage Tree Road, Bayview, Sydney bought her.

He deepend the keel and made a couple of other changes and for some reason which I would love to know why, changed the name to Matoma.

In 1942 the Navy requisitioned Matoma, had a great deal of concrete added to the hull, a dogbox added at the stern and the masts removed. She carried a Vickers gun and depth charges and became Naval Auxiliary Vessel 588, carrying out patrol duty along the NSW coast, mostly south of Sydney I believe. She was disposed of by the Navy in 1947 and returned to her former condition more or less. Halvorsen's of Sydney worked on her and then George Mott purchased Matoma, selling his house and furniture and moving his wife and two daughters on board. They lived and sailed on Sydney Harbour for 5 years till he suddenly died. Matoma was reluctantly sold again, ending up in New Guinea.

The story continues with several other sales and adventures, till some 14 years or so ago another buyer bought her in northern NSW and sailed her to Oyster Cove near Lemon Tree Passage, where he pulled her up onto the hard and started working on the hull. Sadly, after a while he was unable to work on Matoma any longer and the marina facilities are trying to get the yacht moved or demolished.

Our family grew up on the same hope that my father had: of tracking Amalia/Matoma down, having last seen her when the Navy disposed of her. I tried to help him find Amalia, so I contacted the Naval Historical Society (NHS) asking if they had any information on a Patrol Vessel Amalia. I got a one-liner back saying they knew nothing.

After dad died I found a tiny piece of newspaper amongst his papers advertising the disposal sale. I scanned it and emailed to the NHS once again and immediately received an email back saying they thought they knew the boat. A telephone call later and I was talking to Robin Stone, a volunteer at the NHS, whose father was George Mott. She knew the boat well, having lived on her for 5 years. I couldn’t believe it! She had already tracked down most of the later history of Matoma, but knew nothing of the early history. She was equally thrilled!

I wanted to have my grandfather Ivan Jones remembered as having built a boat that so many people seem to have loved. He was forced to sell the boat, by his wife, who (I believe) felt left out, not being a keen sailor. I think she would have been very lonely in Bundaberg, having grown up in a large family in Melbourne and Ivan enjoyed a drink or two (or maybe 3) with his many sailing friends. Gota made him sell the boat and move to Brisbane.

I donated a large collection of my dad’s naval things to the War Memorial after he died. I discovered that they had a small amount of information about the Patrol Vessels and they had photos of Amalia/Matoma/588. Although an attempt was made to donate her to the War Memorial, they eventually had to decline the offer due to the cost of transporting her and then converting her back to how she would have looked for war service.

So here we are with a wonderful wooden boat, with a fascinating history, needing someone to fall in love with her and devote their life to her. Otherwise, I guess she will be cut up for scrap.