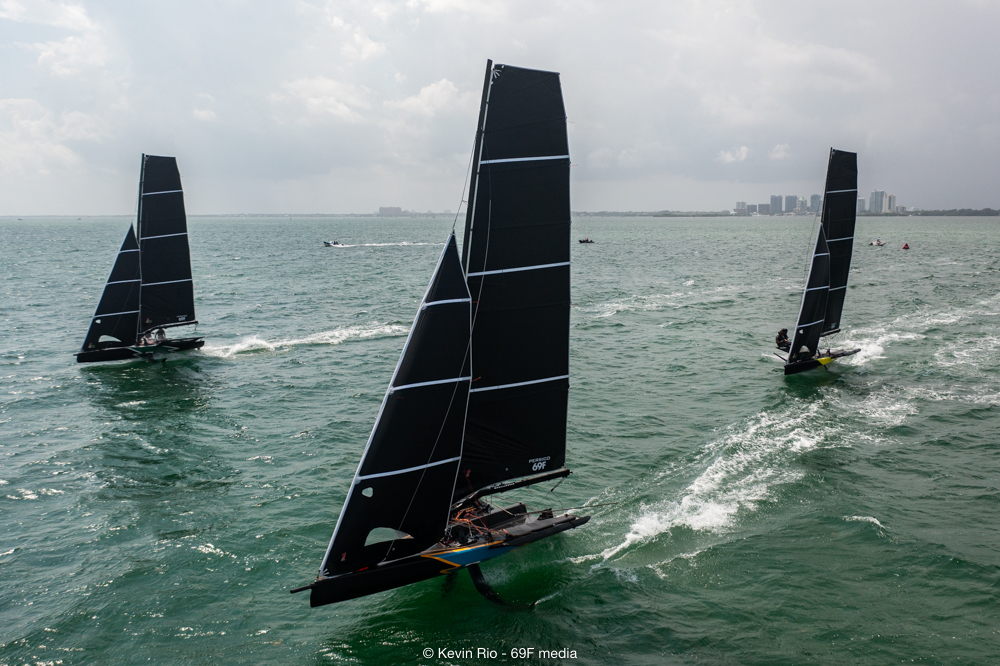 The Clean Sailors Youth Racing Team have won the 69F division in the Bacardi Cup Invitational Regatta (BCIR) in Miami.

Of course, winning always helps brighten your mood and this international team improved enormously after the first day when the final gybe was catching them out. “It was blowing about 17 knots and the course was quite short on day one so wasn’t worth hoisting, setting and dropping the gennaker when we’re already going so fast. Unfortunately we couldn’t get the two-sail gybe quite right and so we capsized on the final gybe.”

After a solid debrief talking through the issues from day one, the Clean Sailors Youth Racing Team really got their act together for the next day, gybing cleanly and winning all six races. “We’ve had more time on the water than the other teams,” said Hesse modestly. “It really comes down to time in the boat getting used to handling the 69F on and off the foils, and working out your coordination between the crew in the manoeuvres.”

Finishing in second was Team Miami Yacht Club sailed by Nicolas Peirano Pratt with Brian Higgins and Nicolas Aragones. In third place were Sail America, a young team of WASZP competitors from Hawaii – Pearl and JP Lattanzi along with Gavin Ball – with an average age of 19.

Hesse said the 69F drew a lot of admiring looks and comments from other sailors competing in the more conventional classes at the Bacardi Cup Invitational Regatta (BCIR). Other fleets included the Star, J/70, Melges 24, Viper 640 and VX One.

“People were saying to me, ‘The 69F looks great but I’m too old to sail one now’,” commented Hesse, at 22, the oldest of his team. “But I would say that a good Star sailor, for example, would take just a few days to adjust to the timing of the manoeuvres and they would get used to the 69F quite quickly.

“I think people seeing such young sailors racing such a fast boat think it’s out of their reach. But they should try it out because I think a good sailor in one class will adapt to another class, even when it’s a high-speed foiler.”

The opportunity to give 69F racing a try is now coming to Europe. After a successful few months establishing the 69F brand in the USA, the focus moves to Valencia in Spain.

In addition to the existing teams on the 69F circuit, the organisers encouraging as many sailors to try foiling competition for themselves, as sales manager Francesco Rubagotti explained: “The Persico 69F has been designed to be the most accessible form of high-speed foiling available. Provided you are a competent sailor, foiling and racing a 69F around the race course is very possible.

“We would love sailors to take the opportunity to sail these boats, to come and give the Persico 69F a try on a ‘Pay-per-Play’ basis. For most people this will be the fastest they have ever travelled on a wind-powered sailing craft.”

What if you want to experience 69F racing without getting wet? The launch of 69F Sailing NFTs later this spring could be the answer!

NFTs (Non Fungible Tokens) are a new form of digital media already making a significant impact in other professional sports, and the 69F brand is looking to pioneer an NFT project in the sailing world.

Zeno Casti, the International COO of the 69F project, explains: “Our 69F Sailing NFT project marks our entrance into the virtual world where we plan to leverage the Ethereum blockchain to grow our community and unleash the same state-of-the-art racing experience that we offer in real life around the globe.”

More details to following in the coming weeks.