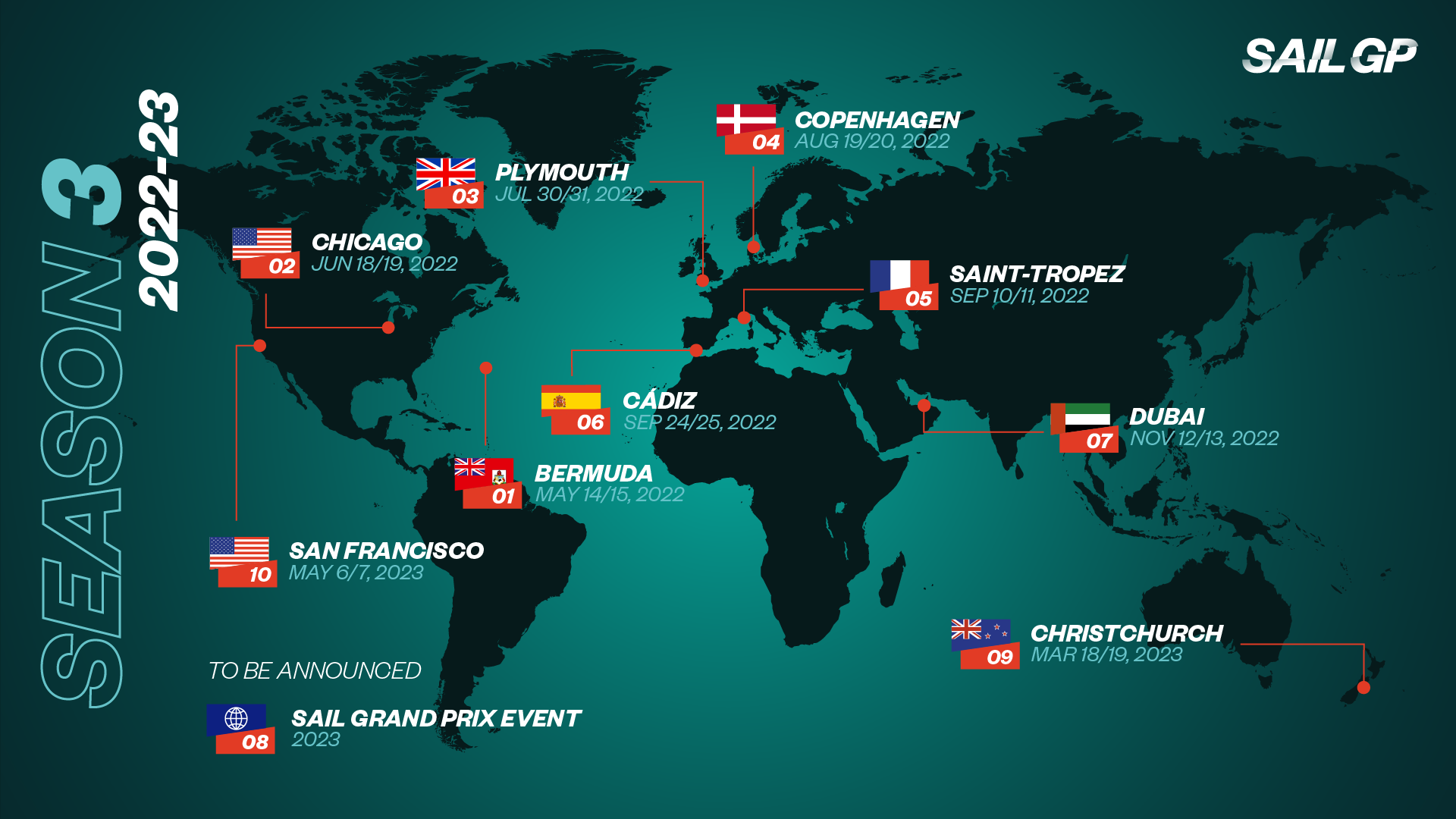 SailGP’s Season 3 calendar has expanded into 2023 with the announcement of two further events including fan favourite destination San Francisco and a debut trip to Christchurch for the purpose-led, global championship.

SailGP heads to New Zealand on March 18-19, 2023, as part of a major four-season partnership with New Zealand Major Events. Through the partnership – spanning Season 3 to Season 6 – Christchurch and Auckland will share hosting duties of SailGP, claiming a permanent fixture on the SailGP season calendar and the first home event for Peter Burling and Blair Tuke’s New Zealand SailGP Team.

The championship will then conclude in San Francisco with the Season 3 Grand Final taking place on May 6-7, 2023, in front of the iconic Golden Gate Bridge on one of the best stadium sail racing venues in the world.

These two new 2023 events join the seven already announced for Season 3, with the championship kicking-off in Bermuda on May 14-15, 2022. From there, the ten-nation fleet –  comprising the sport’s best athletes – will head to Chicago, Plymouth, Copenhagen, Saint-Tropez, Cádiz and Dubai, making it the biggest SailGP season to date.

Further 2023 dates and locations to complete Season 3 – expected to comprise up to 11 events – will be announced shortly.

All the Season 3 action will be available live in over 186 territories through SailGP’s broadcast partnerships as well as across SailGP digital platforms including the award winning SailGP App.

SailGP will continue to Race for the Future in Season 3, as the first climate positive sports and entertainment property it ensures its host cities share a commitment to climate action and a cleaner future. Season 3 will see the return of the world-first Impact League, tracking the positive actions teams make in terms of sustainability and inclusivity.

Female athletes will once again race throughout the season onboard the F50s as SailGP’s Pathway Program continues to grow, and SailGP’s community engagement arm SailGP Inspire will once again introduce the sport to young people from diverse backgrounds.

SailGP is also actively launching the bid process for its Season 4 host venues. Continuing to set a new standard for major event hosting, SailGP is inviting cities to be part of the world’s most sustainable global events calendar. SailGP is looking for host venues that share a commitment to a cleaner future and that are actively taking action to move towards more sustainable practices and activities within their city.

SailGP CEO Sir Russell Coutts said: “As we approach our season finale next week in San Francisco, our plans are already in place for Season 3 which features a fantastic line-up of host venues and a growing roster of iconic waterfront cities and teams.

“Furthermore, the fact that we will race a third time in San Francisco and have agreed a four-year partnership with New Zealand, shows the confidence we are building in our ever-expanding global championship. In fact, we have already launched our bid process for Season 4 and look forward to welcoming applications from host venues around the world that align with our sports, environmental and economic goals and values.”

*further events will be announced to complete SailGP Season 3.