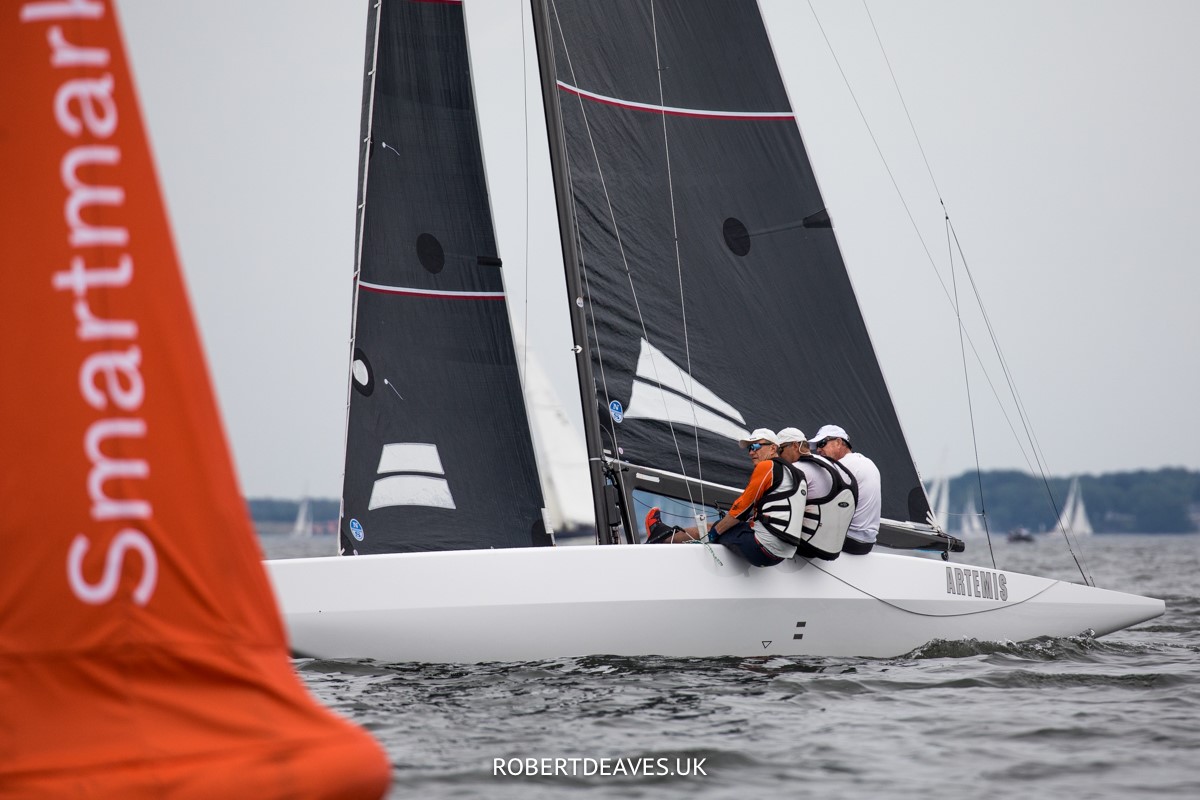 The 5.5 Metre class returned to Glücksburg this weekend for the 2022 5.5 Metre German Open, sailed as part of the Robbe & Berking Sterling Cup at Flensburger Segel Club where the crew of Helly Hansen were the standouts.

Thirteen boats from four nations made it here and sailed three races on the Flensburger Förde on Friday.

While the day promised better conditions, the early sunshine gave way to cloud cover, a little light rain and some shifty winds from 6-10 knots that made for some great racing. Towards the end of the day the wind decreased to 4-5 knots. The fleet of nine 12 Metres also racing made for an impressive backdrop to the day’s racing.

Helly Hansen got the best out of Race 1, tacking off to the right after New Moon II won the pin, but had to return. Helly Hansen led all the way to take the win from MF XXII and New Moon II.

New Moon II cleared out at the start of Race 2 to build a comfortable lead quite quickly with MF XXII again in second. Helly Hansen recovered from a poor start to cross in third.

For the third race the wind had decreased substantially so it was about finding pressure. Criollo (GER 30, Andreas Christiansen, Felix Christiansen, Julius Plass) and New Moon II started at the pin and when they tacked, they looked to be above the fleet.

However, on the other side of the fjord Ali Baba (GER 84, Wolf-Eberhard Richter, Beata Kallkowski, Oliver Weiss) sailed into pressure and around the fleet to hold a nice lead at the top.

The Germans held that lead all the way to the final top mark, but Helly Hansen opted to stay the opposite side of the 12 Metre fleet and found a way through to take the lead. Ali Baba crossed in second with MF XXII in third.

For many here this is a staging post on the way to the world championship in Hankø, Norway. The defending world champion there will be Kristian Nergaard’s team.

He said, “Today was a tricky day, light air with big shifts, so you had to stay with the shifts. The last one was very tricky with the wind swinging around, especially on the last downwind. That was very important to stay on the right side.

“In general, it was a good day. I understand there is going to be more wind tomorrow so looking forward to that. It’s also a good opportunity for us to sail here in Germany as a tune up for the world championship.”

Odin Grupe is sailing the Evolution, Windschleiche, a Warren Muir design, built by Egger in Switzerland in 1982: “The Flensburg Fjord is an awesome place to sail and being invited to the Robbe & Berking Sterling Cup is tremendous because of the 12 Metres on the same race course as the 5.5s, which is a great view,” he said.

“It was fierce racing today with a good wind, 2-3 Beaufort sometimes 4. And we had a really good time. We managed to not to get last in all the races, but we have a new crew and we are getting adjusted.”

Grupe normally sails on Lake Starnberg, “in very light winds so we have to adjust to more wind and we need more time together, but we had a lot of fun.”

He says the boat is quite special to him. “It’s one of three sister ships, one of which is the wooden boat here Criollo, and both hulls are the same. I have had the boat more than ten years and we mostly race on lakes but once a year we do a trip to one of the bigger events to have some fun with 5.5 class.