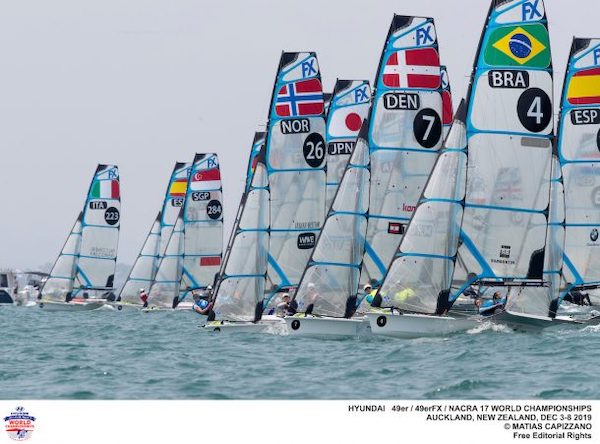 The breeze was a little softer than previous days and at times extremely unpredictable and shifty, but somehow the class acts continue to prove that they’re still the class acts, able to cope with any slings or arrows that are hurled their way…

Nacra 17: Danes close the gap
A solid day of consistent finishing has driven Lin Cenholt and CP Lübeck (DEN) into attacking distance for the gold medal on the final day of competition. While most of the leading teams faltered at some point during Saturday’s racing, scores of 8,5,7 were sufficient to lift the Danes to third overall.

Just a point in front of them are the Aussie cousins, Jason Waterhouse and Lisa Darmanin who started the day with a 13th before redeeming themselves with 8,2 from the end of the day.

Even starker were the fortunes of Vittorio Bissaro/Maelle Frascari who notched up their worst score yet of the regatta, a 20th. The Italians’ next race, a 13th, was only a little better.

The pressure was on, but the Italians responded magnificently, winning the last race of the afternoon to hold on to their overall lead, but with a margin of just 6 points over the Australians. With the points compressed and two Finals races before the Medal Race, no Nacra crew is home and dry quite yet.

49er: Local Heroes reel in German Rivals
Following four years of dominance leading up to their gold medal at Rio 2016, Peter Burling and Blair Tuke continue to prove that they are the benchmark in 49er racing. Heading into today’s racing the Olympic Champions needed to gain seven points to reel in the regatta leaders of Erik Heil/Thomas Ploessel (GER).

Finishing the day with a race win, the four-time 49er World champions amassed a 13 point lead over the second placed Germans. However they didn’t do it by themselves – with Heil/Ploessel stumbling in a major way to rack up a whopping 38 points from just three races.

Closing in on the top pair, but with still a large gap, are the 2017 world champions Dylan Fletcher/Stuart Bithell (GBR). Even more interesting is the pack of four boats behind them with only 17 points separating this bunch, all of whom will be scrapping hard to climb on to the podium on Sunday.

49erFX: Reigning World Champs versus Reigning Olympic Champs
The 49erFX fleet has a new leader, as the reigning world champions, Bekkering/Duetz (NED), slipped ahead of reigning Olympic Champions Grael/Kunze (BRA) by a single point. The Naess/Ronningen (NOR) continued their attack on the leading pair, keeping their Norwegian noses clean enough to finish the afternoon just 8 points from the leaders.

The only team to keep all their scores inside the top 10 on a very tricky, unpredictable day were Victoria Travascio/Sol Branz (ARG). They scored 10, 4, 7 to rise to fifth overall, just 2 points back from Tina Lutz/Susann Beucke (GER).

However, the Germans sit 18 points back from the third-placed Norwegians, so it’s going to take a mighty final-day performance from somebody to topple the top three off the podium.
Sunday will see two final gold fleet races in the morning followed by the double points medal races later in the day.