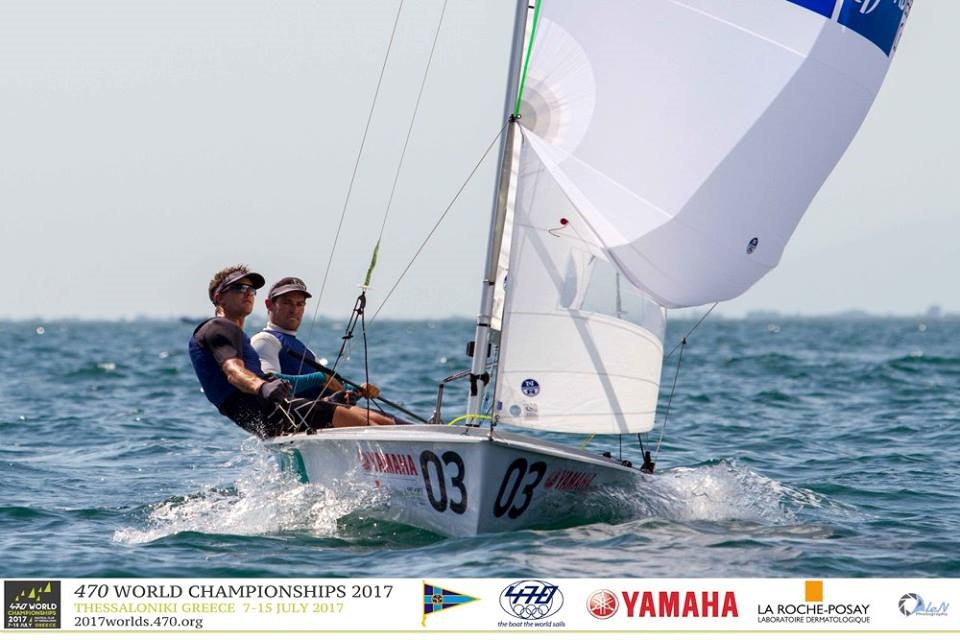 Belcher and Ryan on Day Two of the 470 Worlds.

The 2017 470 World Championship is being sailed on the Bay of Thessaloniki, in northern Greece, and after the five race qualifying series, the Australian dual Olympic 470 medalist Mat Belcher says this regatta is wide open.

In the men’s fleet, after the second day of racing, triple Olympian Anton Dahlberg and his Rio crew Fredrick Bergstrom (SWE) are continuing to sail the regatta of their life. Today taking a first and second in the yellow fleet they now have three wins, a second drop and a second.

Behind them Australian’s Mat Belcher and Will Ryan finished today with a fourth and a first as they did yesterday. In third place is the lightweight pairing of Bargehr and Mähr (AUT), Machetti and Dantès (FRA) are fourth, McNay and Hughes (USA) are fifth with Snow- Hansen and Willcox (NZL) sixth.

Chris Charlwood and Josh Dawson are now 21st in this their first major international regatta.

Six times World Champion Belcher talked about the conditions this afternoon, “All this week from here on, it will be Groundhog Days. Blue skies, high 30’s. Same quite light sea breeze. We are in seven to nine range. Every day.

“On this course, the leaders at the top first mark are basically the leaders in the race. The course is biased to the left-hand side, with persistent left shifts. If you can’t get cleanly off the line there is a very high chance you won’t get left and you are going to be in the back of the fleet which is why we have seen a lot of teams OCS. Very tight racing and we were fighting for metres.

“Will is really looking forward to the day that he can really stretch his legs and myself so I can start hiking. I don’t think that is going to happen at this regatta. It is very friendly on the helms. We are sitting on the floor of the boat and barely sit on the sides.

“High scores happen in light weather Gold fleet racing. With the conditions, here you can just finish in the 20’s, just as easily as you can in the top group. A couple of bad starts and you can lose 20 points.

“The effect is a very open regatta. I think anyone in the top 15 can win and the only reason I am saying it is because we have done it. We have been 25th going into the Gold fleet racing and we have medaled. Gold Fleet racing is super tight. Those lanes, the starts, everything.

“Anything can happen and all we are doing is just approach the best we can do, make the best decision, try and get as much speed as we can and hopefully we have enough to be there at the end.”

In the 470 women’s fleet, the cream is already at the top with Hannah Mills (GBR), London 2016 silver medalist and Rio 2016 Gold medalist now sailing with new crew Eilidh McIntyre leading the fleet, with Mrak and Macarol (SLO) second and Skrzypulec and Gliszczynska (POL) third.

Australians Nia Jerwood and Monique De Vries sailed a sixth and 12th today. Although they are 18th and solidly in the Gold fleet they are only 10 points out of the medal fleet contention and with six races to go between now and Friday they will be pushing hard.

Nia said today, “Monique and I are very excited about our performance so far at our first 470 Worlds. Our goal entering the regatta was to make it into Gold fleet, after our results today we achieved this comfortably. We are looking forward to the challenge of racing in Gold fleet, and hope to keep improving each day.”

Carrie Smith and Jaime Ryan are having a tough regatta. They are now 30th. Jaime commented, “It's been really tight racing, long hot days and a tricky course to wrap your head around. We've just managed to scrape into the Gold fleet, obviously not where we want to be sitting in the fleet but we'll keep chipping away through the next three days of finals racing and hopefully get back in the game.”

Dana Tavener and Katherine Shannon are 52nd and Shellee White and Amelia Catt are in 55th.

The two Australian men’s teams and four women’s teams will all be racing in their Gold fleets, six races are scheduled between now and Friday, then the double points Medal races will be sailed on Saturday.