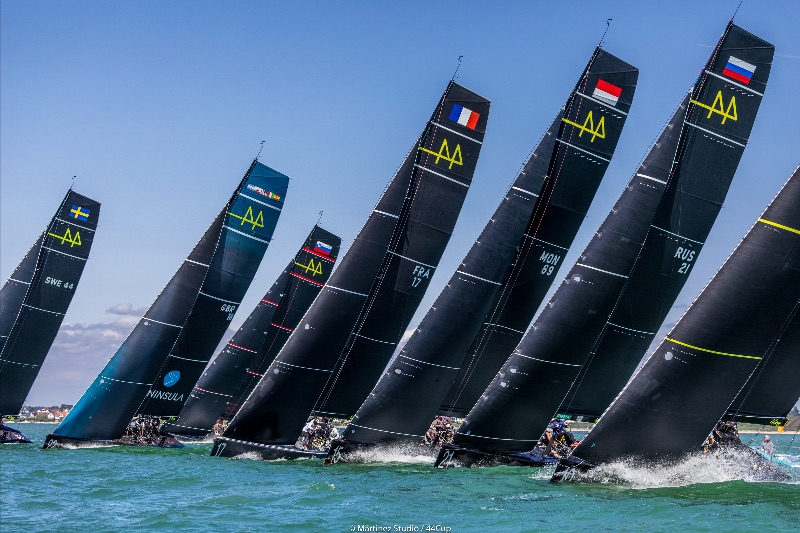 The high calibre of sailing among the RC44 fleet today, made it hard to believe that it was just a day of practice racing.

Following the 44Cup in Marstrand, Sweden in early July, eight teams will compete in the UK 44Cup from August 11-15. This is a collection of highly experienced crews that only know one gear – winning.

It was no surprise then that the start and first beat to the west along Cowes’ famous Green, turned into a competitive affair.

The race course proper was set off Lee on the Solent and provided a wide open race area to the southwest for the three practice races that followed. While the sea breeze was well established and consistent at 15 knots, so too was the strong ebb tide that made judging time on distances at the start crucial.

Throughout the afternoon several teams found themselves over the line at the start, albeit by the odd second or two. But during the course of the coming days this could well turn out to be one of several key factors that define success in this notoriously closely fought fleet.

“The tide adds another dimension that we don’t normally have,” said Artemis Racing’s Torbjörn Törnqvist. “It’s interesting because the boats in this fleet are so evenly matched. We all spend a great deal of time watching each other and learning, analysing and improving so the tide really adds something to the racing.”

Penninsula Racing’s tactician Ed Baird was also clear on just how close the racing is likely to be this week. “Typically, everybody does win at some point and it’s putting together a good consistent series that is the challenge,” he said. “The last time the fleet raced here was in 2016 but that time we were based out of Portsmouth and raced outside the Solent to the east where the tide didn’t have such a big influence.

“This year the tide will be a slightly bigger issue than it was back then because there are differences across the course area and we have a deep water channel on either side.

“Aside from the local conditions the other big difference is that given the lack of sailing in the past year because of the Covid-19 pandemic, everyone’s super excited to be back out on the race course. But one thing hasn’t changed and that’s that to win everyone on the team has to be perfect, it’s that level of competition. As we know from the last event in Marstrand, it’s easy to go from first to last in one leg because you have to duck one boat.”

So, while it might have been practice day today where no points were placed on the board, everyone sailed as if there would be. The result? A perfect taster for what’s in store for the rest of the week.

First warning signal for fleet racing tomorrow will be at 12.00 BST.