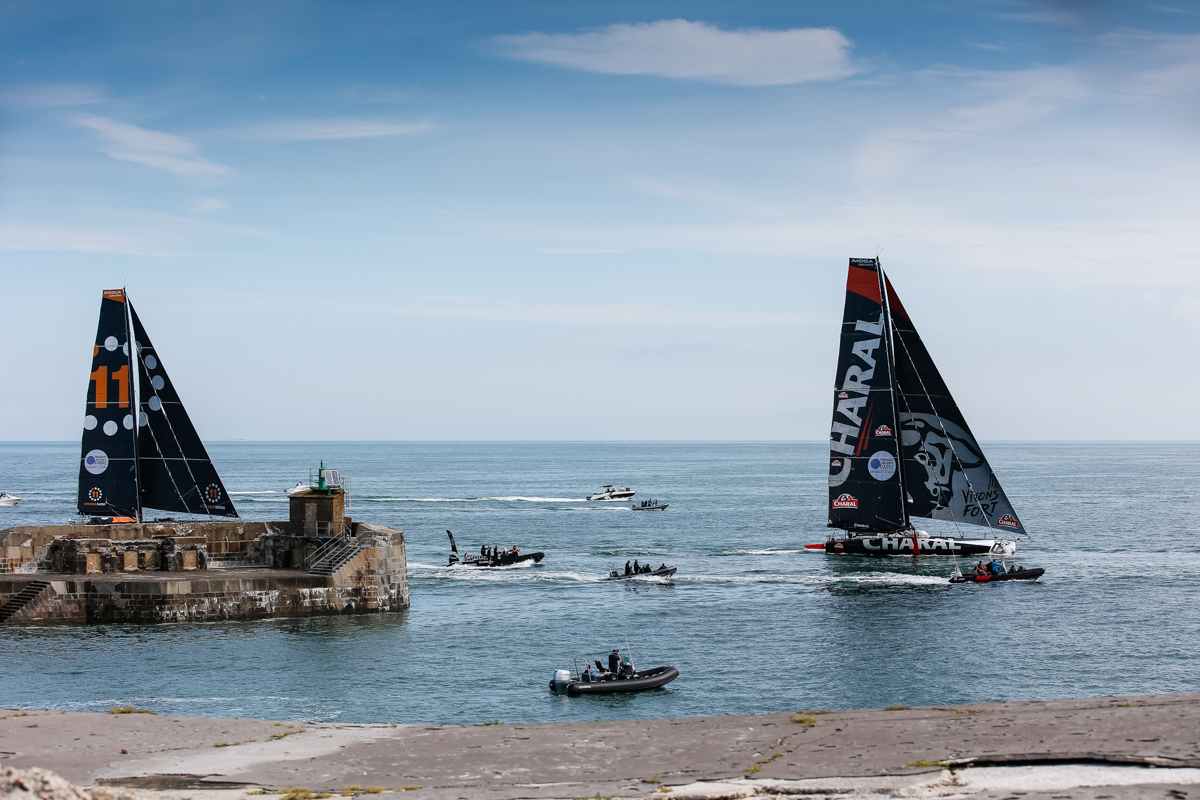 France dominated the 2019 Rolex Fastnet Race, winning nine of the 10 classes; but times have changed in the 2021 edition of the race with two British boats and one German in contention for the IRC Zero podium.

Two British yachts and one Swedish yacht are vying for the top three spots in IRC One. IRC Two sees another British yacht holding a comfortable lead over a Dutch boat, with a French boat third. Significantly a British boat is looking strong to win the coveted Fastnet Challenge Cup for the overall IRC win, but at this stage, no lead is insurmountable.

With the absence of Nicolas Groleau’s Bretagne Telecom this year, so David Collins steered his Botin 52 Tala across the finish line this afternoon with a strong grip on IRC Zero and remaining well in contention for a podium spot in IRC overall, finishing at 16:42 BST in 3 days 5 hours 2 minutes and 49 seconds.

Tala beat German Jens Kellinghusen’s Ker 56 Varuna by just over two hours on corrected time. Quietly confident, Collins & Co are keeping one eye on the likes of Richard Matthews’ brand new CF520 racing machine, Oystercatcher XXXV, which is due in this evening, but looking unlikely to topple Tala.

Collins was pleased with how they’d tackled the race, “The first bit was very tough, but this boat has seen some big weather before. The waves were short and steep, but the crew looked after the boat well. We were double-reefed at times because we were hitting the waves hard. Then the next part of the race was fascinating – tactically very challenging.”

This is where Tala’s navigator, Campbell Field, earned his keep, “Campbell made some great calls, working out how to get past this last TSS zone for example, finding some counterintuitive moves that really worked well for us.”

As to Tala’s chances of winning the race overall, Collins was philosophical “We’ve done what we came to do, which is try to win our class. As for the rest of it, all boats sail on a different bit of the ocean, experiencing different tide and different winds. What we do know is that whoever wins overall will have sailed their boat really well.”

Other potential IRC One challengers include Störtebeker, the Carkeek 47 from Hamburg skippered by Katrina Westphal, and Lady First 3, the Mylius 60 skippered by France’s Jean Pierre Dreau.

Polish entries were strong for IRC Zero victory, but the final hundred miles to the finish saw them slow and plummet down the rankings. Nevertheless the VO70 I Love Poland and VO65 Sailing Poland have put high-performance offshore sailing back on the map in their country. Grzegorz Baranowski’s VO70 is crewed by sailors primarily under 30 years old. For the Rolex Fastnet Race they had the added experience of British Figaro veteran Alan Roberts and former Volvo Ocean Race winner Martin Strömberg.

26-year-old navigator Konrad Lipski explained I Love Poland’s objectives, “Its aim is to bring in young sailors with strong backgrounds in youth, Olympic or other forms of racing, and give them an opportunity to gain experience.” Line honours victory in the 2020 Rolex Middle Sea Race was a great milestone, and now a solid performance in the Rolex Fastnet Race brings more credibility and momentum.

Running a similar youth development focus is the VO65 Sailing Poland, which had Bouwe Bekking as guest skipper. “It was good to see the 16 and 17 year olds coming through this race, sailing well,” said the Volvo Ocean Race veteran. “Maybe the result won’t be as good as it could have been because of the big compression, but that’s ocean racing – there’s nothing you can do about that. Now the boats behind us have the tide against them which will be a bit painful for some, that might gain us a bit of time back.”

After the exceptional IMOCA win for Apivia early this morning, there was yet more compression in the fleet astern as the Vendée Globe 60 footers fell foul of the Alderney Race. Nonetheless the defending IMOCA champions, Jérémie Beyou and Christopher Pratt on Charal, maintained second, despite facing a stiff final challenge from Anglo-Swiss duo Simon Fisher and Justine Mettraux on 11th Hour Racing, third by a mere 27 seconds.

“To push Charal for second and sneak past Arkea, Paprec was a great result for us in our first doublehanded race,” said Fisher, a fully crewed round the world race veteran, enjoying being skipper for the first time in a major race. “I am really happy with how it went and how Justine and I are working together. It was a belter of a race.”

The Nigel Irens 84 catamaran Allegra, sailed by Adrian Keller arrived at 11:28 BST this morning and looks set to collect the MOCRA prize. This follows Allegra’s multihull class victory in the last RORC Caribbean 600. Keller commented, “This is a happy moment. A week before the race, I was not sure if I could even get into England because of the restrictions, so getting to the start line was great and the outcome was fantastic.

“I think we have now proved that Allegra is more than a floating apartment and demonstrated this type of boat can race and hold its own against racing designs. This was my first [Rolex Fastnet] race, and it was very exciting. I have a great deal of respect for the course. The start was very windy and coming out from Hurst Castle it got really tough. However, I will remember the Fastnet lighthouse – pitch dark, but you could see that light. That will be is a memory of a lifetime.”

While Oren Nataf’s speedy Pulsar 50 catamaran Rayon Vert regained a lot of ground in the last 24 hours she was almost two hours outside of Allegra’s corrected time.

In the early hours of this morning Luke Berry’s defending Class40 champion Lamotte – Module Création got rolled while crossing the Celtic Sea en route to Bishop Rock by Antoine Magre’s Palanad 3. Magre’s newer Sam Manuard Mach 40.4 design was then able to extend, passing Bishop Rock at around 0500. Since then Berry has also had to look over his shoulder to defend against Switzerland’s Valentin Gautier on Banque Du Leman (another Mach 40.4). Approaching the west side of the Casquets TSS, Berry managed to recover some ground but will be hoping for a last chance saloon opportunity playing the tides south of Alderney.

In IRC Two, Tom Kneen’s JPK 11.80 Sunrise, sailed by a RORC youth crew, passed Bishop Rock at around 1430 BST and was making good progress on course towards the finish having extended their lead to 40 miles over Dutchwoman Astrid de Vin’s sistership Il Corvo.

Today the biggest risers have been Bernard Wilmet and Yannick Grecourt’s Hanse 470e and Ross Applebey’s Lightwave 48. The majority of IRC Two will round Bishop Rock this evening. However a significant meteorological feature will be affecting the boats around the Scillies this evening as a front rolls through bringing strong southwesterlies ahead of it, but weak northwesterlies behind it.

Meanwhile the IRC Three leaders are approaching the TSS due west of the Scilly Isles and look set to leave it to port. The closest of fights among the frontrunners in any of the classes exists here with defending champions, Alexis Loison and Guillaume Pirouelle’s JPK 1030 Léon out in front but with several others in contention. Making best progress today out to the east are the British two-handed duo Volvo Ocean Race sailor Henry Bomby and double Olympic gold medallist Shirley Robertson on the Sun Fast 3300 Swell.

This afternoon the IRC Four frontrunners were two thirds of the way between the Fastnet Rock and Bishop Rock making 7 knots. Here David le Goff’s JPK 10.10 Raphael continued to lead both on the water and under corrected time. However the fight is really on for second place with Francois Charles’ Dehler 33 Cruising Sun Hill 3 currently up to second from Harry J. Heijst’s S&S 41 Winsome.