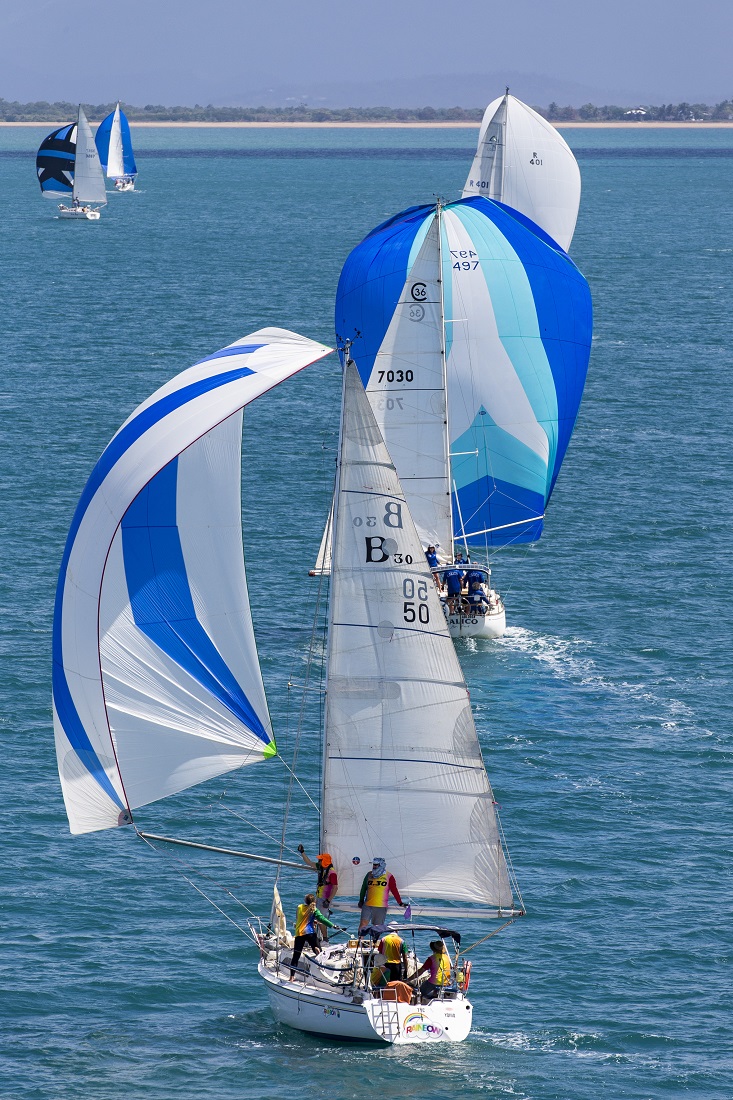 Rainbow chases down her quarry in 2018 - Andrea Francolini pic

In times of adversity you find out who your real friends are, and so it is with Townsville Yacht Club’s SeaLink Magnetic Island Race Week, with fervent supporter Andrew Pearson not only entering a crew, but encouraging others from his hometown Sydney to join in this one-of-a-kind regatta to be held from 29 August to 4 September.

Entries have only just opened and the Sydney yachtsman continues to work hard to encourage others along too: “They’ve been through a terrible time in Townsville with the floods, so I want to give back to this wonderful event,” said Pearson who has raced at the event four times before.

“It’s a big push, but we’re going to support it,” said the yachtie friends call ‘Banker’. He will arrive at Magnetic Island with Mark Spring and his beautifully named Beneteau First 45, Highly Sprung (one of Paul Clitheroe’s former Balance’s); winner of the 2019 Pittwater Paradise Race.

The boat, entered in the SeaLink Spinnaker class, will be crewed by some of Highly Sprung’s regulars and some of Pearson’s CYCA mates, “who have been dying to do it,” he said. “By September, winter’s been in full swing and we won’t be able to wait to get to Magnetic Island for the first major regatta of spring.”

The Middle Harbour Yacht Club member has enticed others from his club to come along for the ride too.

“Laurie McAllister is bringing Zeus II (Jim Dunstan won the 1981 Sydney Hobart with this Currawong 30) with a mix of male and female crew. Rob Reynolds and Shaun Lane (prominent yachtsmen) are looking for a boat to charter up there – maybe a boat that’s just done Airlie Beach or Hamilton Island that doesn’t have the crew to continue on,” he said. “There’s a lot of interest at this end.”

Like the rest of us, the marine businessman also enjoys the social side:  It’s a day’s sail up from the other northern regattas with the Cape Upstart barbecue at the end of it – it’s so sociable – so I hope it’s on again. It’s a wonderful way to start the regatta off,” he said. “I’m just hoping they revive the mud crab racing – everyone talks about how much fun that was.”

Pearson continued: “Magnetic Island is a great relaxer before getting serious back home in the lead-up to the Sydney Hobart. Warm people, warm climate and it’s very convenient with accommodation, food and beverages and racing on the doorstep.”

Knowing how quickly the Island’s berths fill up, Highly Sprung and her clubs mates are not the only ones quick off the mark to enter. Fifteen others, representing Queensland, NSW and Victoria have signed up.

Among the TYC locals are Tony and Selena Muller with their Jeanneau Sun Odyssey 409, Brava. Mal and Sylvia Pirret are also entering their Beneteau Oceanis 45, Champagne. The two men are directors of the Club and regularly support this regatta.

With his Event Chairman hat on, Pirret says, “Early Bird entrants receive multiple entries into the draw for the chance to win our fantastic Early Bird prize package of seven nights’ accommodation in a three bedroom apartment at the stunning Peppers Blue on Blue Resort (SMIRWs exclusive accommodation partner) and free berthing for the event at Magnetic Island Marina in 2020.”

Peppers Blue on Blue Resort is offering an Early Bird special of 10 percent discount on their Peppers Bed and Breakfast rate (with various accommodation options available), including one welcome beverage per person. Secure the special rate by booking directly through the resort before 30 June 2018. Phone: (07) 4758 2400 or email blueonblue@peppers.com.au

As is usual, berthing is at a premium, so entering now will avoid disappointment.

Prospective entrants can choose from the SeaLink Spinnaker, SeaLink Non-Spinnaker and Multihull classes. And as those who have been before will tell you, you don’t want to miss this special event; enter now: www.magneticislandraceweek.com.au/