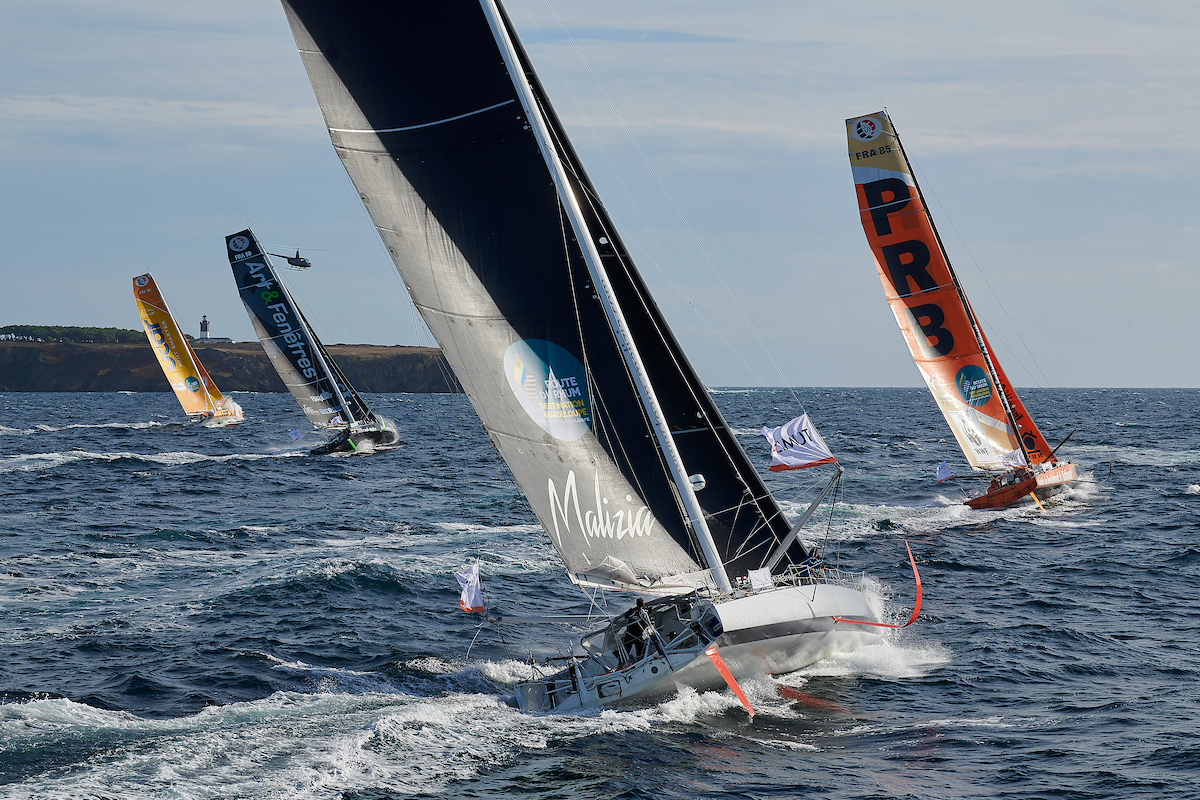 From September 18 to 22, the ninth Azimut Challenge in Lorient will bring together an exceptional line-up of 23 IMOCAs, including three brand new boats: Advens for cybersecurity, Arkea-Paprec and DMG Mori.

Because this is a Transat Jacques Vabre year (start on 27th October), the Azimut Challenge, which has renewed its partnership with the IMOCA class, will be raced double-handed with a bigger format, with in particular a 48-hour race, which should offer the sailors some precious lessons. We look at the programme and who is taking part

For the first time, the Azimut Challenge will last five days, instead of the usual three. On Wednesday 18th September, the crewed runs will mark the start of the event in Lorient. The aim is to get the best time over the distance of 1.5 miles.

Last year, the event was particularly spectacular with some acrobatics from Charal, which had only just been launched.

On Thursday 19th September, 23 IMOCAs are expected to set sail in the big race in this Azimut Challenge with 48 hours of double-handed racing. This offshore race that everyone is looking forward to, will be the final battle between the boats before the Transat Jacques Vabre.

To finish, on Sunday 22nd September, the crews will take part in the traditional race around the island of Groix, during which they will be able to take on board some guests.

The IMOCA class had a busy summer with its launches, with five boats being unveiled in just six weeks. One of them, Arkea-Paprec sailed by Sébastien Simon and Vincent Riou, has already taken part in the Rolex Fastnet Race. Unfortunately, it sadly ended with the boat retiring and so this time, the duo will really want to complete the Azimut Challenge race and get a good result. For Vincent, it is also an opportunity to defend his solo title won last year.

In the absence of Charlie Dalin’s Apivia, Arkea-Paprec will be able to see how she measures up against two other IMOCAs launched in recent days: Advens for cybersecurity (Thomas Ruyant/Antoine Koch) and DMG Mori (Kojiro Shiraishi/Gilles Campan).

Although they are all busy fine tuning their respective boats, these double-handed crews will no doubt find it hard to leave to one side their competitive instincts…

An armada of 15 foilers

Charal, an IMOCA from the latest generation launched a year ago, benefits from a year more of training than the newer boats. Jérémie Beyou and Christopher Pratt are sailing on a boat that everyone fears and which has been made more reliable since her first experience of racing in the 2018 Azimut Challenge. Recent winners of the Rolex Fastnet Race, they will be among the favourites this year.

We will also keeping a close eye on the performance of the new look MACSF sailed by Isabelle Joschke and Morgan Lagravière, as she is almost a new boat after all the work done on her during her eight months in the yard and the addition of foils. We shall also see whether the recent North Atlantic record breaker can do as well when in race mode.

Aboard La Fabrique, Alan Roura will be joined by Sébastien Audigane. In all, 15 IMOCAs with foils are expected to compete in the Azimut Chalenge.

All of the double-handed crews will be doing their utmost

Competing against increasingly competitive foilers, it is getting harder and harder for the IMOCAs with straight daggerboards to keep up with the frontrunners. Hard, but not impossible… Clarisse Crémer and Armel Le Cléac’h (Banque Populaire X) proved that when they finished in third place in the Rolex Fastnet Race.

Other sailors racing on boats that have been worked on over a long period may be seen as outsiders with a chance. That is true in the case of Nicolas Troussel/Jean Le Cam (Corum L’Epargne), Maxime Sorel/Guillaume Le Brec (V and B – Mayenne), Damien Seguin/Yoann Richomme (Groupe Apicil) – among others.

For all of them, this is an ideal opportunity to see how they measure up against their rivals and hopefully receive a boost to their confidence before the Transat Jacques Vabre, the next big event in the Globe Series, which will soon be upon them…

Registered for the 2019 Azimut Challenge: