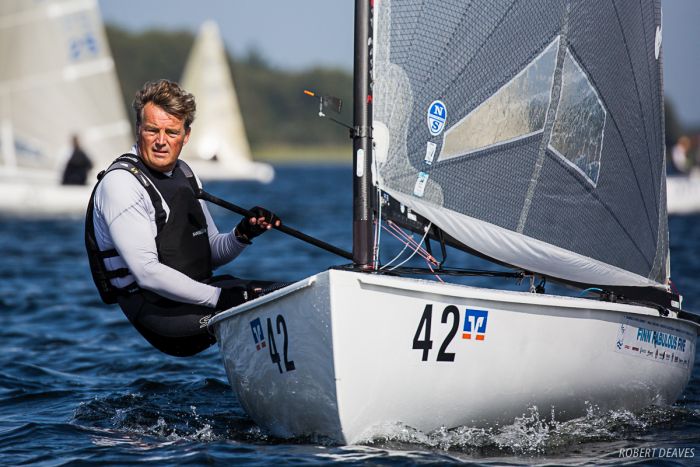 Bas de Waal, from the Netherlands has taken the lead at the Finn Europeans Masters after two more races were completed in Schwerin, Germany. Felipe Silva, from Portugal, dropped to second with Gerko Visser, also from The Netherlands up to third. The races were won by de Waal and Michael Maier, from Czech Republic.

The conditions were more benign than on Wednesday, dropping to 4-5 knots at some points but at other times there were enough gusts to catch out the unwary, with a few sailors testing the water temperature in Schwerin Lake. During the day the wind varied from 4 to 15 knots and everything in between, with larger shifts and more than few clouds passing overhead.

De Waal was the early leader in Race 3, rounding the top mark with a nice lead already and sailed away from the fleet for what seemed like a certain race win. On the first downwind excessive cloud activity sucked away all the breeze and the fleet drifted down to the gate in 4-5 knots. Though de Waal led at the gate, Silva was applying pressure and on the second upwind, took the lead, but de Waal passed him again on the outside in more pressure just before the final mark ahead to lead into the finish. Maier crossed in third after a big recovery on the first beat.

Maier was back on the water on Thursday after carrying out a delivery trip yesterday for Finns heading to Melbourne for the Gold Cup in December. After being squeezed out of the start in Race 3, the six time World Masters champion made a better job of it in Race 4 and rounded the top mark just behind Lawrence Crispin, from Britain. He took the lead on the first reach to extend on the fleet on each leg for a comfortable win. Andre Budzien, from Germany, took quite a few places on the final downwind as the breeze returned in force, while Ricardo Santos, with a newly repaired boat crossed in third. The breeze brought the whole fleet down at speed for a fast and tight finish.

At the half way stage de Waal holds a scant two-point advantage over Silva, while Visser is a sizeable 23 points behind in third. The day however was won by Maier with a 3, 1. Racing continues Friday, with four more races scheduled until Saturday. Friday’s forecast is quite fruity so should add some more entertainment, while Saturday’s is for very light winds.

The Finn European Masters is a series of eight races from Wednesday 11 September to Saturday 14, September. It is being sailed on Schwerin Lake in central Germany, and is organised the Schweriner Yacht Club.

Many more photos can be found here: www.flickr.com/photos/finnclassphotos