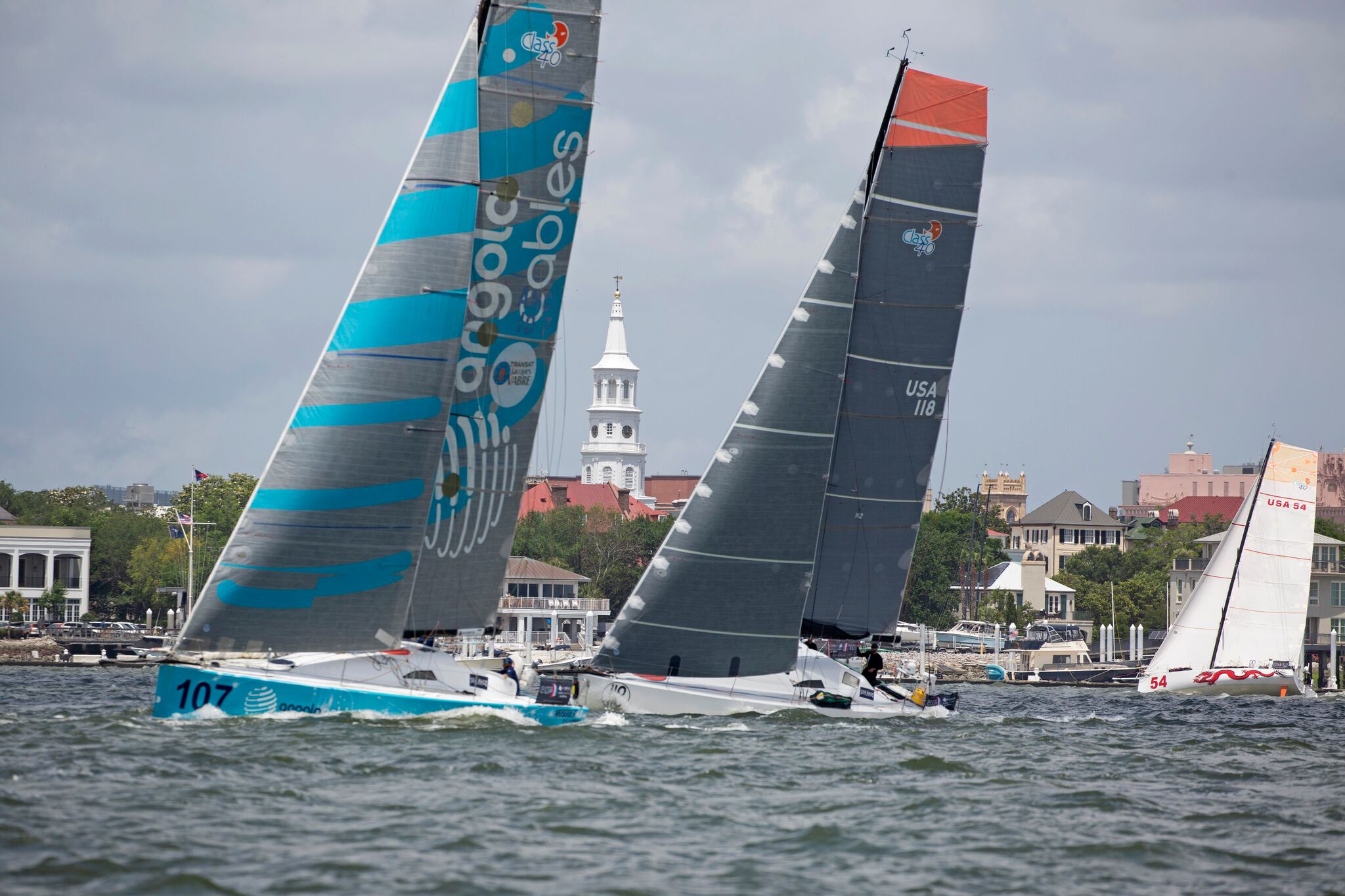 May 27 2018 – Charleston, SC – The first 24 hours of the 2018 Atlantic Cup have been intense. Since leaving the maritime city of Charleston, South Carolina the 11 Class40s competing to cross the Angola Cables Finish Line in New York City have been positioning themselves throughout the racecourse.

Shortly after the start three groups formed with #145 Eärendil, #81 Esprit Scout, #118 Oakcliff and #95 Talanta heading east and for the currents of the gulf stream. #37 First Light, #101 Power of One took the coastal route opting to sail fewer miles against those heading for the stream. This leaves the third group positioned nicely between those to the east and those to their west. #128 Toothface and their sister ship #128 Amhas are joined by #107 Angola Cables and #57 Dragon Ocean Racing. It looks as if these four teams currently own the race course's prime real estate having made good VMG since the start.

Tristan Mouligné on board Toothface 2 had this to say in their morning check in,  “Last night was fun, fast sailing, we had some auto pilot problems, which we had to sort out and got passed by Amhas and Angola Cables to windward. It's sorted now and we’ve got some ground to make up, but we are good.  We are not in the real meat of the Gulf Stream at the moment, but we will get more into it at Cape Hatteras. The current is with us and we are sailing less miles, we will see what happens with the boats that went further out and have more current but have sailed more miles, it's a roll of the dice.”

The race at the front the fleet is hotly contested and a match race has developed between #127 Amhas and #107 Angola Cables. José Guilherme Caldas, said, “We are very good, we have been in a big fight for first with Amhas. They are right here within a few hundred meters of us, it's definitely a match race here.”

Also notable is First Light, Class40 rookies, sailing the oldest boat in the fleet. First Light is skippered by 49er World Champion Fred Strammmer alongside Sam Fitzgerald. In this morning's update call, Fred Strammer said, “We had issues coming into Charleston getting our autopilot to work, we had a mechanic’s help in Charleston to try and fix it but it currently doesn’t work, so we’ve been steering by hand the whole time. We are feeling energized, I’m really stoked to be doing this race. We just ate some freeze-dried and we are playing some tunes and trying to go as fast as we can. I think we’ve had a speed advantage helming by hand because we are playing every little wave that we can and we’re sailing the boat as hard as we can.”

North Sails President and Atlantic Cup Race Expert, Ken Read, provides an overview of the fleet, “As anticipated the decision to go east for the Stream or stay close to the rhumb line has been crucial with the leaders for the most part heading just east of rhumb and putting in very few extra miles. In essence the leaders are letting the stream come to them rather than forcing in extra miles.  Which means it is fun, fast sailing and my guess is that the sailors are having a ball so far.

One thing that sticks out is the pair punching it out for the lead being quite close, which often results in short term gains due to concentration and having someone to spar with. But, that sometimes can also cause a bit more fatigue for short-handed teams as you tend to get out of your rhythm and press a little hard until fatigue takes over.  With that said, Ahmas and Angola Cables have positioned themselves well to get to the Stream easily around Hattaras and get a bit of a sling shot around the boats to the west like Toothface and First Light.

Good clean fun out there.  I like most of you am quite jealous.  Great boats and terrific sailing and it looks like getting around Hattaras will come with little concern which is always very, very good.”

The race can be tracked at: http://atlanticcup.org