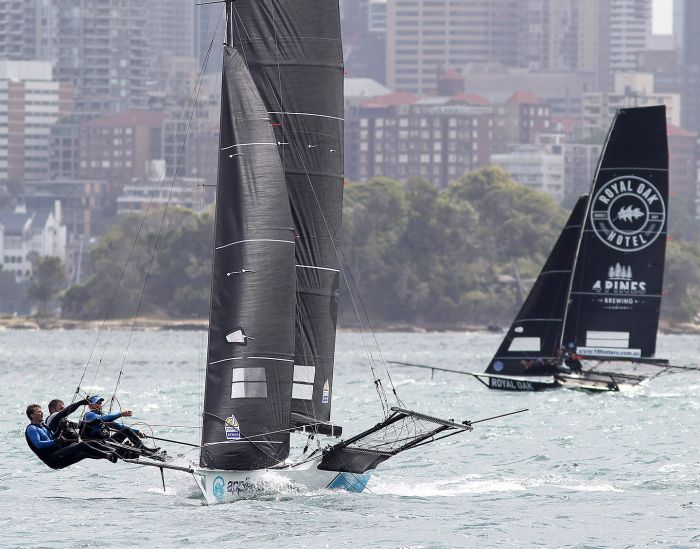 Appliancesonline grabbed the lead from The Oak Double Bay-4 Pines but The Oak won the day. Photo 18 Footers League.

The Appliancesonline.com.au team (Brett Van Munster, Phil Marshall and Kurt Fatouris) became the 2019-2020 Australian 18 Footers League Spring champions, but it was The Oak Double Bay-4 Pines team of Jack Macartney, Courtney Mahar, Charlie Gundy which took honours on the day with a 2m49s victory in Race 7 of the series on Sydney Harbour today.

Both teams were outstanding throughout the seven-race championship. Appliancesonline.com.au finished with a total of 26 points, while the consistent The Oaks Double Bay-4 Pines was runner-up on 36 points. Third placed overall was Yandoo on 50 points, followed by Finport Finance on 54, Rag & Famish Hotel (Bryce Edwards) on 57 and Noakesailing (Sean Langman) on 58.

A 22-knots SE breeze enabled all teams to use their smaller #2 rigs for the first time this season and the fleet provided spectators with a great spectacle as they raced downwind at top speed.

A good breeze, some close racing throughout the fleet, and lead changes brought about by the 3-Buoys handicap system which operated at the Rose Bay windward mark, produced an interesting and exciting race.

Yandoo took the early lead from R Marine Pittwater (Marcus Ashley-Jones) and Noakes Blue before the fleet set spinnakers for an action packed, speed spectacle run from Rose Bay on the south side of Sydney Harbour to Robertson Point on the north.

On the next windward leg to Clark Island, The Oak Double Bay-4 Pines grabbed the lead from Yandoo with Ilve in third place and appliancesonline.com.au closing in on the group..

Sporting brand new #2 sails, appliancesonline.com.au was superb on the third windward leg as the fleet sailed from Chowder Bay to Rose Bay but The Oak Double Bay-4 Pines took advantage of the 3-Buoys system to grab the lead back, ahead of Yandoo, appliancesonline and Ilve.

The Oak's team were confident about their speed and tacked soon after rounding the buoy in Taylor Bay while most of the chasing teams preferred to stay on a port tack across the harbour.

Over the last two legs of the long SE course, The Oak's supremacy was never tested as the team sailed faultlessly to record a comfortable win.

Appliancesonline had worked her way back into second place on the final leg of the course before the team was caught out in the lee of an outgoing ship.

The Australian 18 Footer League's 2019-2020 Season continues next Sunday when the club will stage Race 1 of the NSW Championship.

Spectators can see all the teams while they are rigging, then follow the racing on board the club's spectator ferry, which leaves Double Bay Wharf, alongside the rigging area, each race day at 2pm.