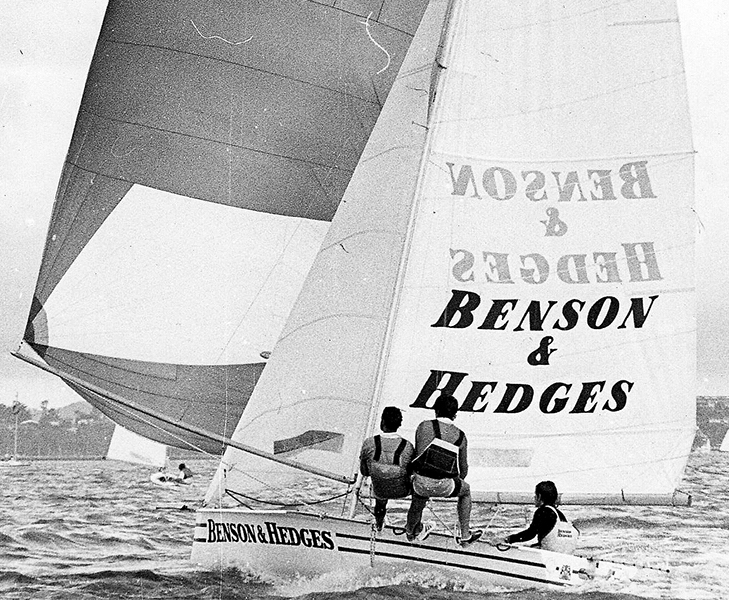 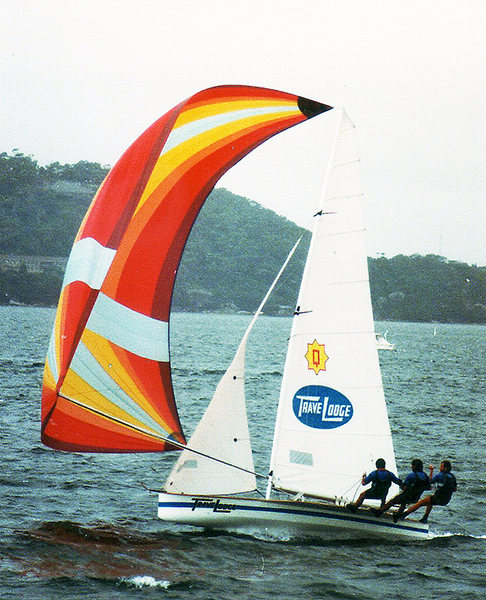 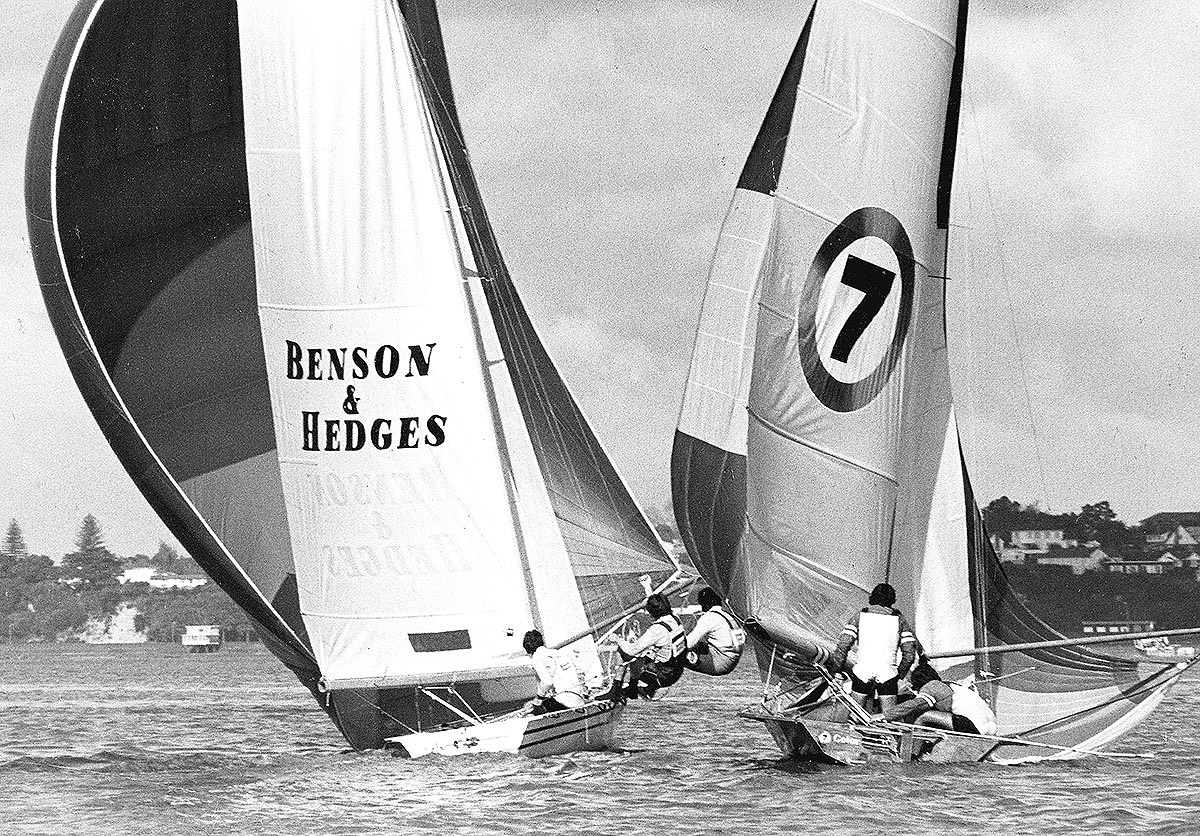 Timber versus foam, as Color 7 and Benson & Hedges compete at the 1977 worlds. Pic- 18ft skiffs archive 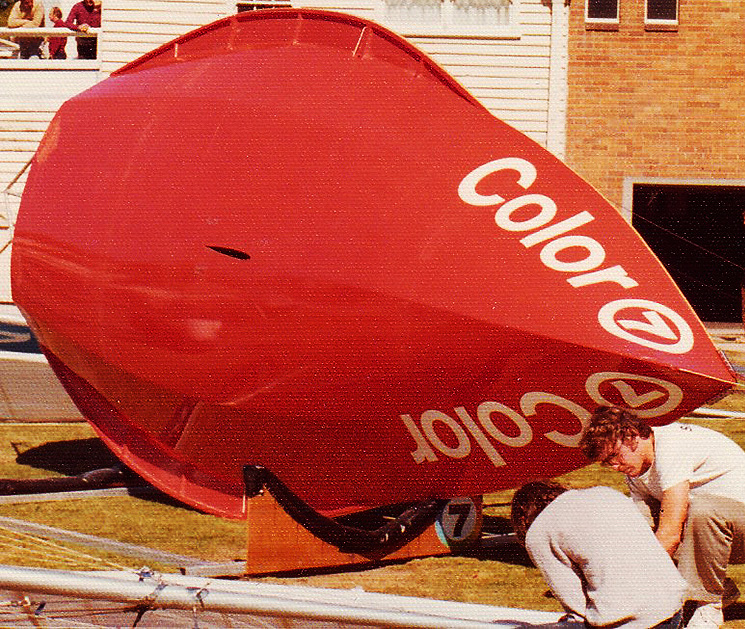 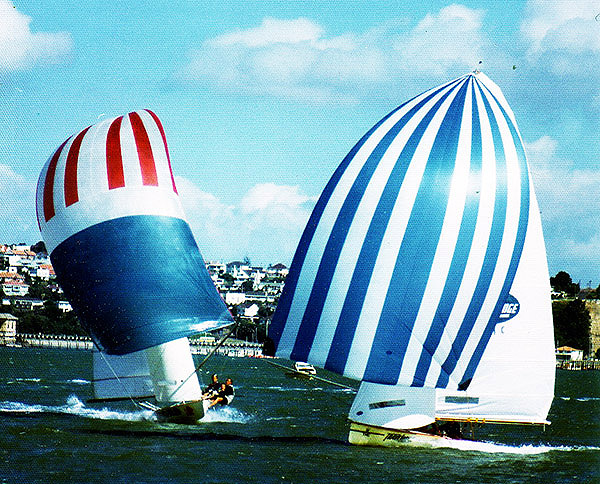 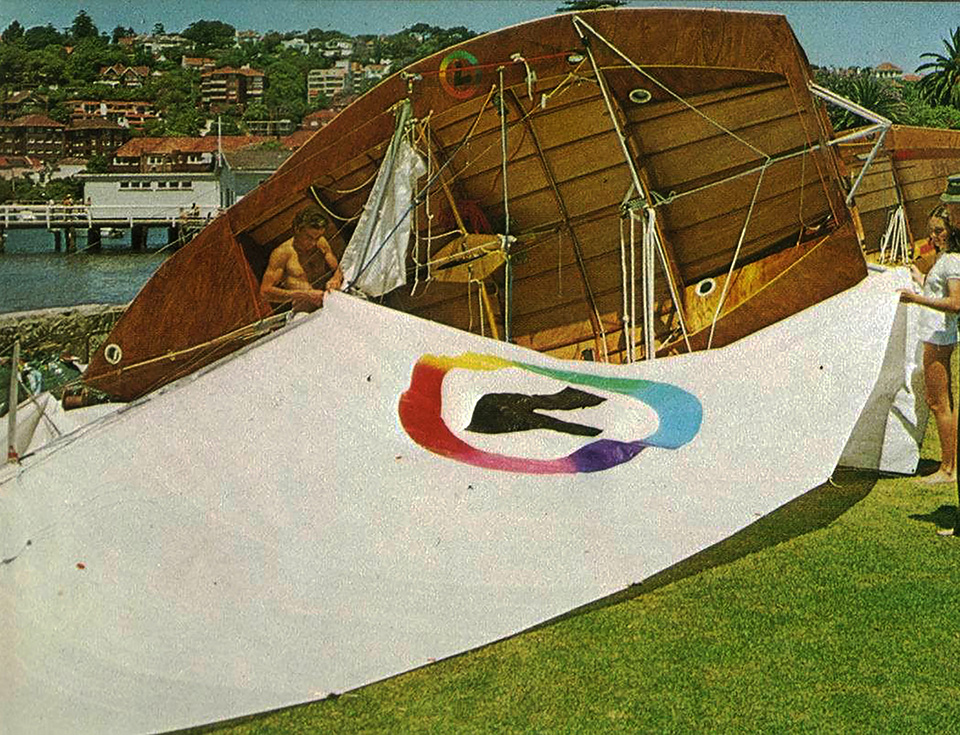 It was a closely fought five-race series with a dramatic finale, which introduced a new type of boat that changed the face of 18ft skiff racing and also introduced a rookie to the class, who would become a legend.

The 17-team fleet with entries from New Zealand, NSW and Queensland in Australia, and Great Britain, also included the three most recent champions and two other skippers who would later become world champions.

Prior to the six-boat NSW team leaving for Auckland, Dave Porter’s KB was a strong favourite to take the championship title back from defending champion Stephen Kulmar, who had a brand-new Miles Furniture skiff for the contest.

Kulmar, Porter and Griffith had staged a brilliant contest the previous year, but Murray’s entry into the 18s, with the support of television’s ATN Channel 7, was expected to test the three experienced teams.

After finishing fifth to Porter in the Australian Championship, Murray drastically altered his original design before the boats were shipped to Auckland.

This regatta was also historic as it was the first time in the championship’s history that a full British team, led by Peter Legrove, represented Gt Britain in a locally-chartered skiff (Sitmar Cruises), and became even more historical as it was also the final worlds regatta won in a timber hull.

With so many potential championship winners, the competition over the first four races resulted in four different winners, and going into the last race KB and Color 7 were level on 14 points, although KB held a two point advantage after each team discarded its worst performance in the four races of the regatta sailed to that point.

If Color 7 won the final race, KB would need to finish second to become the 1977 champion.

Conditions made sure that the scene was set for a wonderful finish to the regatta. The wind was 20-knots from the north and, according to David Porter, the seas were “huge”.  The course was going to be an extremely stiff test, and a battle for survival.

All teams naturally elected to carry their small rigs, but the 14 miles North course was going to be an extremely stiff test, and a battle for survival.

Ansett Airlines took an early lead and was well ahead in the race when her boom snapped.  Miles Furniture then took over, raced to a big lead, and was first across the finish line, only to learn later that the team had been disqualified for not answering a recall at the start.

The critical point in the race, to determine the overall championship winner, came when the eight boats still left on the course reached the Rough Rock buoy for the last time.

KB rounded the buoy in a clear second place behind Miles Furniture. The fleet only had a two mile run across the harbour back to the finish off Orakei Wharf, so it appeared that the title would belong to KB.

Color 7 was lying more than five minutes behind KB at Rough Rock which meant that Murray and his team had to do something different.

Due to the conditions, all leading teams elected to head in a south-easterly direction before gybing and running to the finish line.

Most did it well, but KB got carried a long way up to weather and when she finally managed to grannie, and head for the finish line, both Travelodge-Queensland and Rank Xerox had passed her.

KB was in trouble, but worse was to follow for the team.

In a ‘death-or-glory’ bid for victory, Murray’s Color 7 team made a daring decision to leave the fleet, hoist a small spinnaker and take a far more direct route than the leaders had taken across the heavy seas which were battering the competitors.

It was a bold move but near North Head, the breeze dropped slightly.  Murray called for a spinnaker, and after a couple of anxious moments, the team got it set.

While Porter and the others were cautiously making the last section of the course a dog-leg, Color 7 flew straight across the harbour to the finish line.

Miles Furniture crossed the finish line only to be greeted by silence, and the crew were shocked as they didn’t realise that they had been disqualified for breaking the start, and not returning.

The Color 7 team’s move paid off when it crossed Travelodge Queensland, which was leading at the time, and scored a narrow victory, while KB was relegated back to finish in fourth place.

One New Zealand writer (at the time) said the decision had to be one of ‘Sydney or the bush’ when they set out for the run home.  It was a 1000-to-I chance that came off and onlookers were amazed at the manoeuvre.

Porter said he knew about the Miles Furniture recall and wasn’t worrying about the defending champion team.  He was ‘cautiously’ sailing home, with Color 7 out of sight, and believing that only Travelodge-Queensland and New Zealand’s Rank Xerox were in KB’s vicinity.

Russell Bowler’s Benson & Hedges finished in third place in the championship, behind the two top Australian skiffs, but was the boat which changed 18 footer racing forever. She was a very small, light, round-bilged hull which pioneered a polystyrene core sandwiched by a very thin fibreglass laminate construction. It was reportedly one-third lighter (with a hull weight of 125 lbs) than the New Zealand plywood boats.

Murray was impressed with Benson & Hedges, but for the following season decided to use Nomex honeycomb paper as the core material, covered by Kevlar skins in a female mould. The hull weight was about 160 lbs, with all the fittings.

In the five years following that memorable day in 1977, Iain Murray and his Color 7 team of Andrew Buckland, on the sheet, and Don Buckley in the bow, created an incredible record by winning every world, Australian and NSW Championship from the 1977-78 to 1981-82 seasons, inclusive.

Immediately following the last race of the 2022 JJ Giltinan world 18 footer Championship regatta, Iain Murray will present the traditional blue ribbon to the winning team, while the rest of the fleet sails nearby.

Spectators can follow the racing on board the spectator ferry.  Booking online through the club’s website is essential: http://www.18footers.com.au/18-footers-sailing/spectator-ferry/