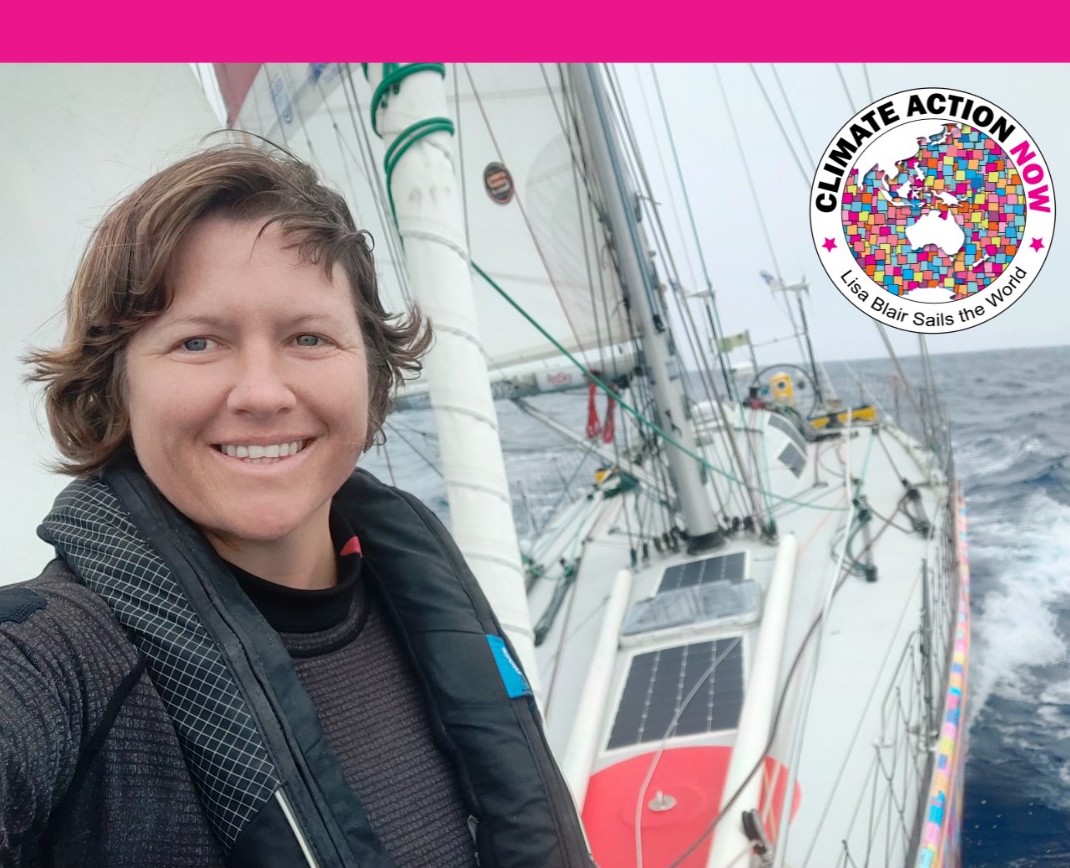 The sun didn't last too long in the Southern Ocean. Pic - Lisa Blair

In her latest blog post, Blair makes the most of sunshine in the Southern Ocean before the rough weather arrives.

Well, what a busy day I have had despite the light weather. I didn’t end up getting to bed until late again, so I slept until 9am Perth local time. When I finally dragged my sleepy self out of bed it was greeted with a glorious sunny day in the Southern Ocean with a steady 10 knots or wind from the NW.  I know that I have had a few blue-sky days in my trip so far but normally these are few and far between in the deep south.

I made a quick decision to take advantage of the sunshine to fit in a hot shower on the back deck while I have the chance.  The only hiccup was when I checked the outside air temperature and it showed that it was 13 degrees on deck. Even that light wind at those temperatures was going to make for a brisk and fast shower.  But my need for clean hair won out and with the upcoming stronger winds and building seas with these passing Low pressure systems to my south means that it could very well be weeks until I can get this clean again.

It looked like the sun was going to stick around for most of the day, so I had breakfast and then changed over micro plastic samples before tackling the shower.  I have to say, it was brisk and extremely fast. I was so cold afterwards that I needed to sit under the cuddy (the dome section of the cabin that is outside on the deck) which is out of the wind, wrapped up in my towel until I stopped shivering, but it was so worth it.

I decided to make a picnic on deck again for a late lunch and laid out a protein shake along with some crackers and cheese.  It was nice just to be able to sit and enjoy the sun for a few minutes.

Afterwards it was time to change the micro plastic samples again and by the time I return on to the deck five minutes later I was shocked to see that the sun had been hidden by some low-lying misty clouds that were part fog and part cloud. The temperature plummeted to 10 degrees, and everything got damp in a matter of minutes.

It was incredible really to see such a shift in the weather so quickly but not wholly unexpected as I had seen a faint line of clouds on the horizon before going below.  Even though I couldn’t see the sun, I could see a nasty looking dark grey cloud line quickly approaching. With my forecast showing winds up to 30 knots tonight I decided I better get my but into gear and get Climate Action Now Storm ready.

So, I went around the boat completing a rig inspection and when I made it to the bow, I found three little fish only give cm in length dead on the bow.  I have no idea when a wave washed them up but two were jammed under my spinnaker polls and had started to rot……yuck.

Being vegan I have always been funny about touching dead things so I actually carry a special set of kitchen gloves for just this purpose. Every now and again some poor creature will find itself washed up on my decks. Unfortunately, I usually, don’t hear them until it’s too late, so, with my poor dead fish I ran below and grabbed my horrible green dead fish gloves and returned to the bow to give them a burial at sea.

After that I started to consider the need to have the storm jib rigged up. I decided on getting a longer-range forecast and after a quick look decided that it is a great opportunity to get it up and tested in strong winds without it being a major storm just yet.  There is a storm passing to the south of me and if that storm happens to push north a little I would be in for some rough conditions. There is already a 4.5-meter swell forecast for Saturday and with the new deck layout it would be great to give it a go.

Decision made and two hours later I finally had a flying storm sail however I managed to cop a wave on the bow that soaked my new clean thermals through, so I guess I only managed to stay clean for a few hours at best. Once I made it back inside the cabin I was shivering with the cold because I was silly and didn’t put on my foul weather gear from Musto.

I set about making some hot burritos which did the trick in warming me up, so now at 9pm I have had a big day and I am ready for a good few hours’ sleep before a required gybe in the morning.