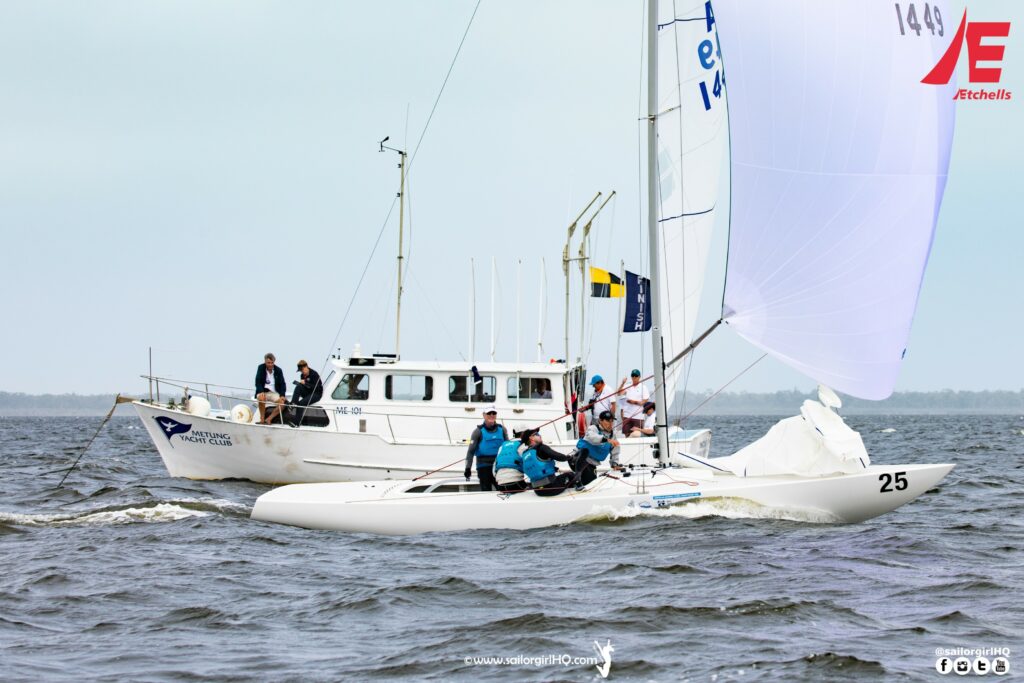 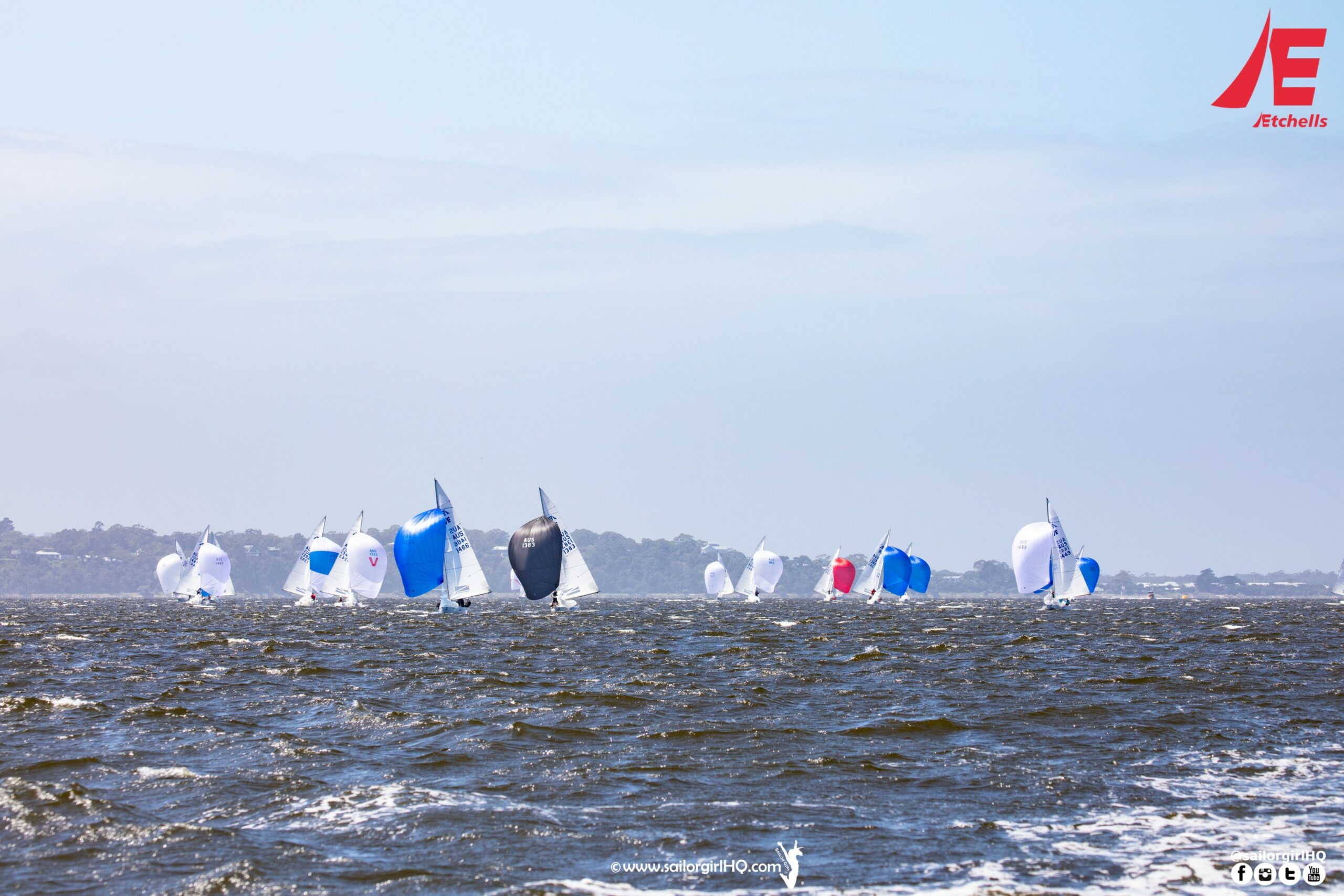 The fleet heading into the finish of Race 1 on Lake King. Pic - Nic Douglass @sailorgirlhq 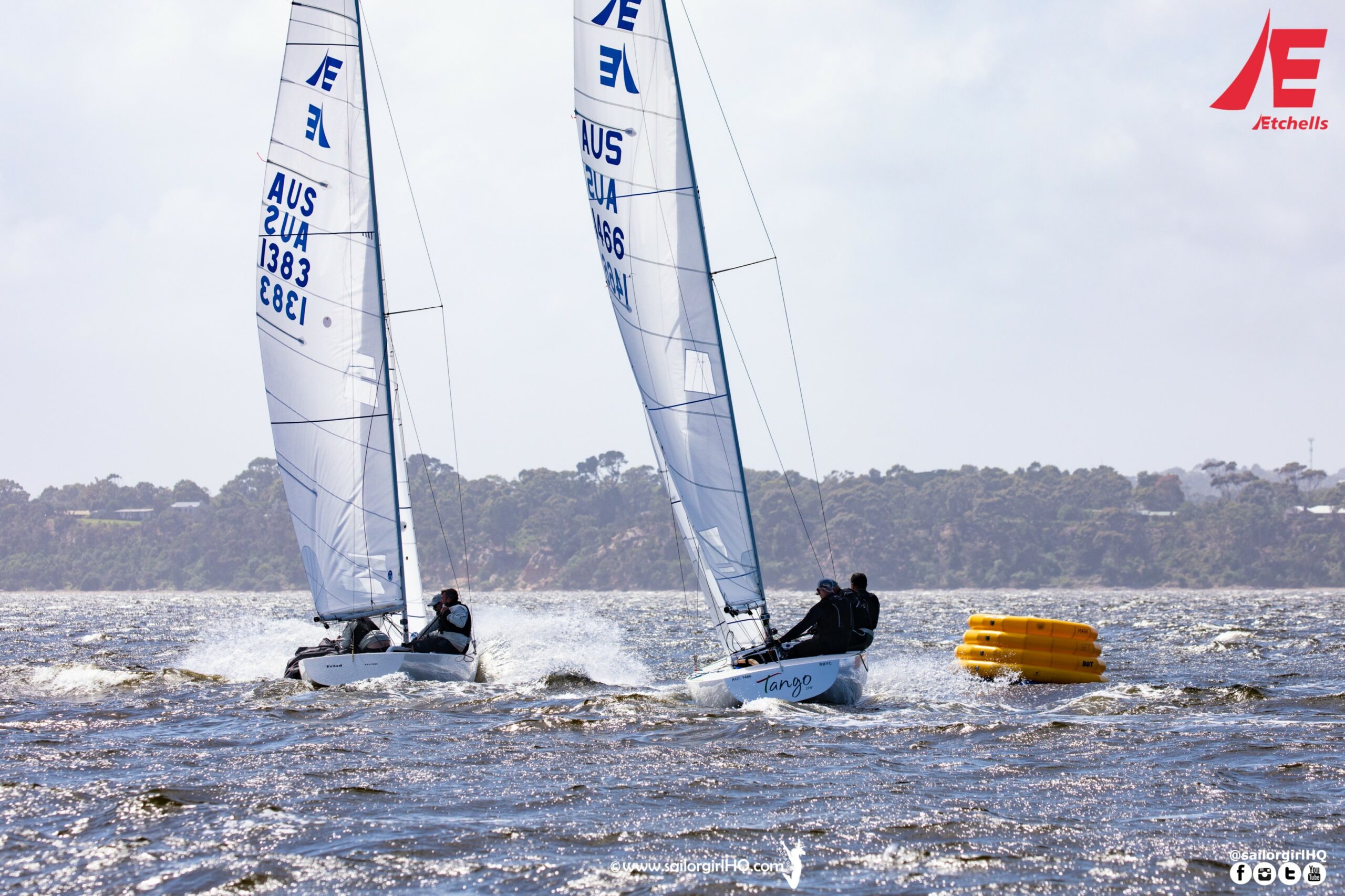 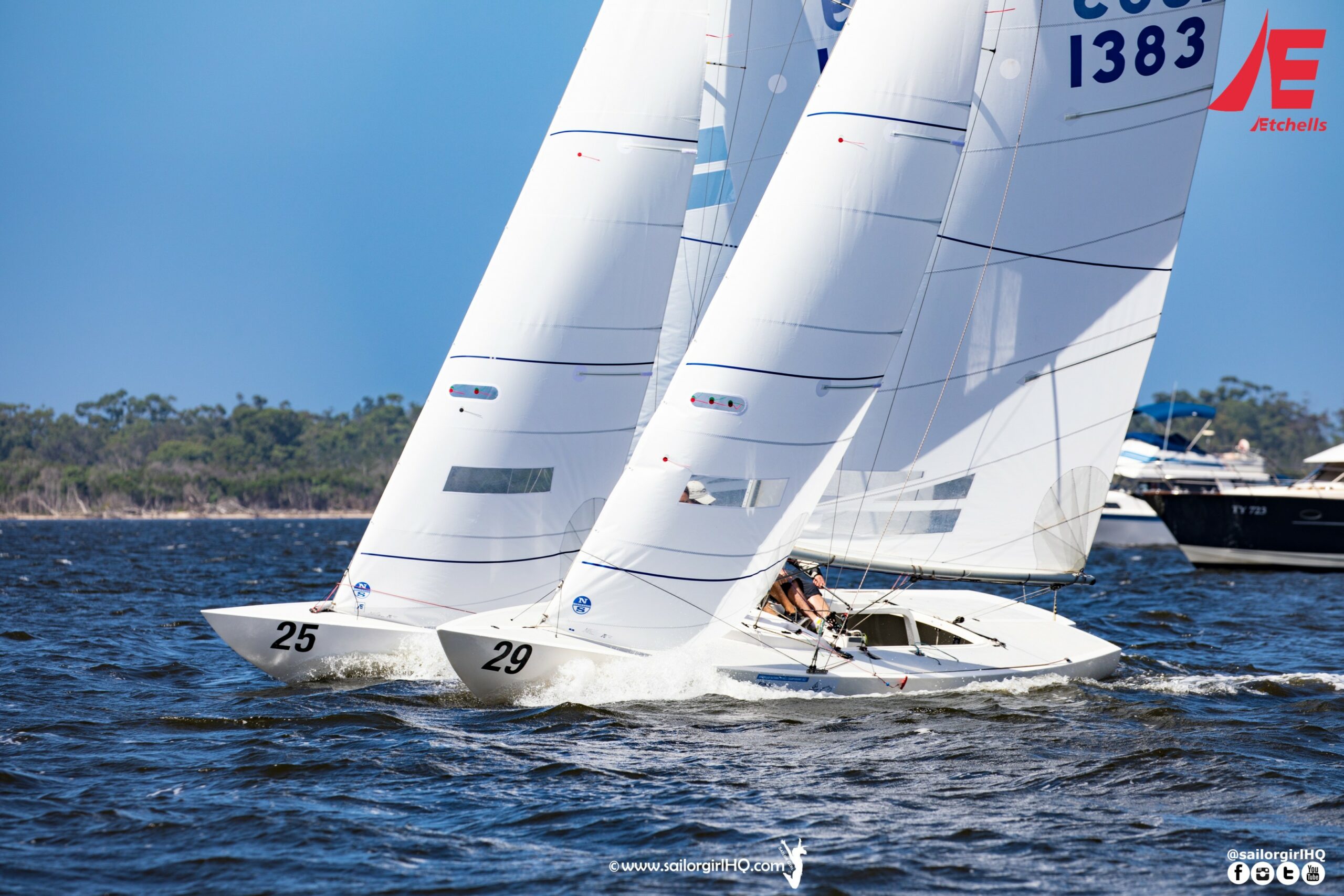 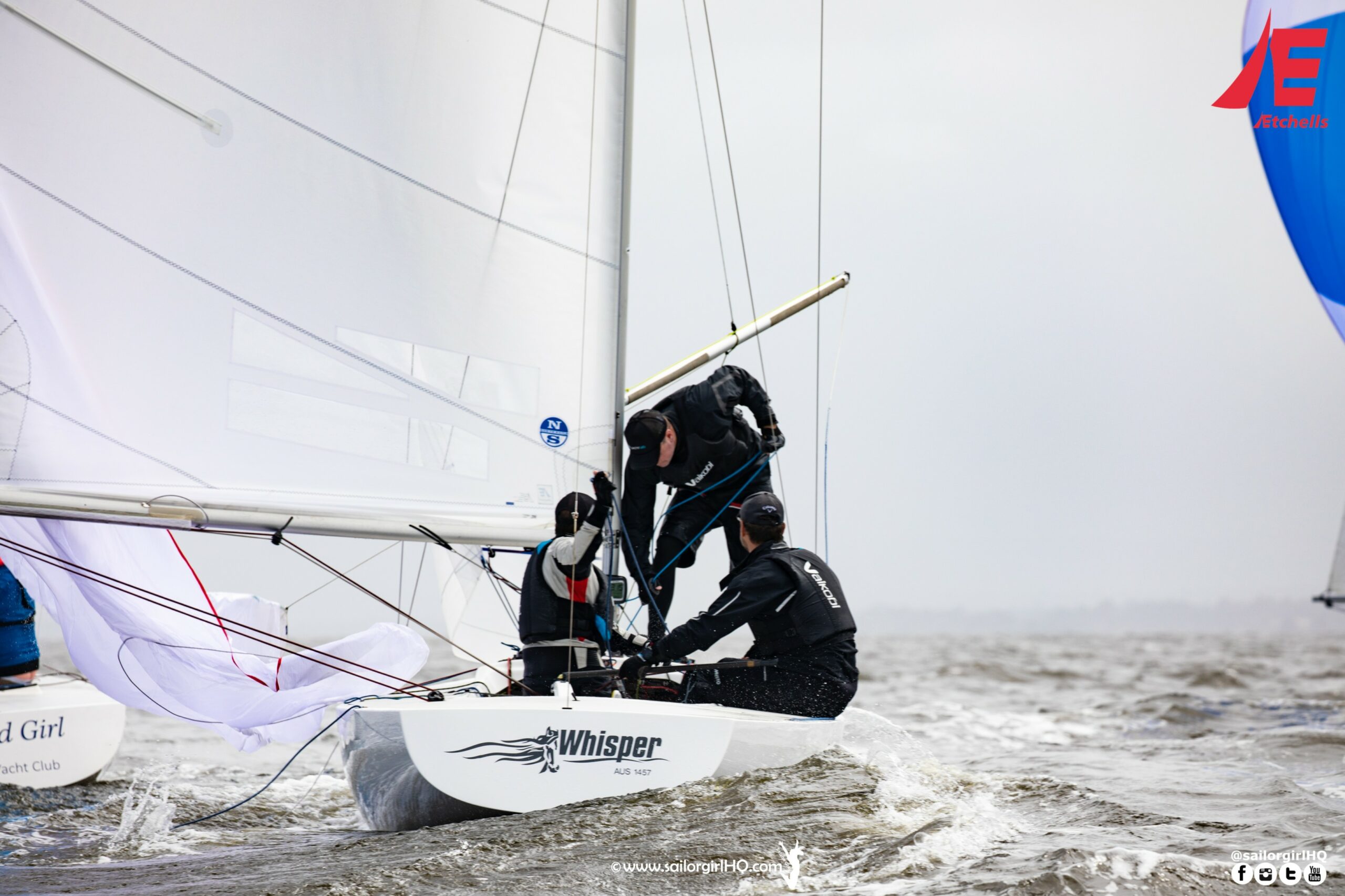 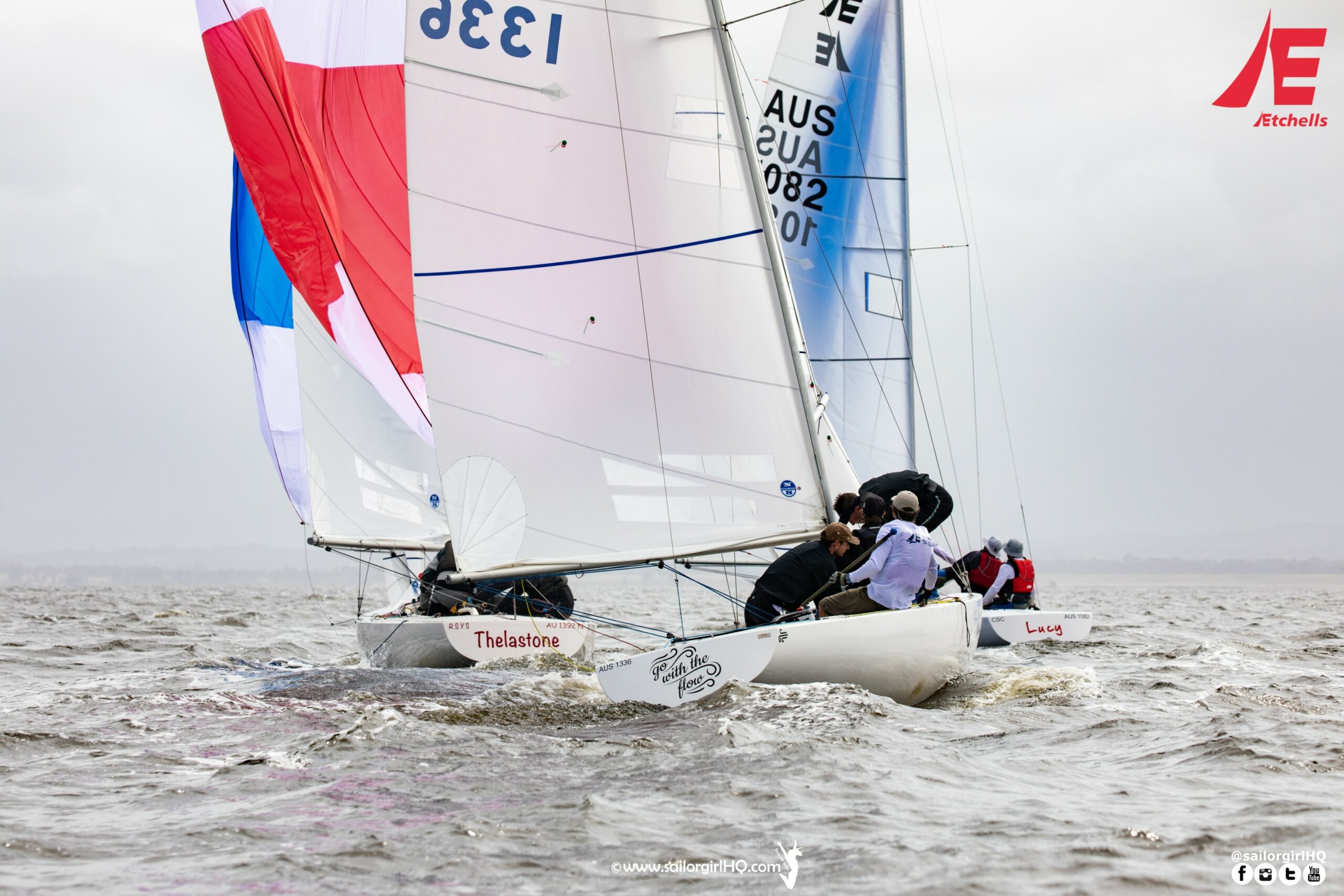 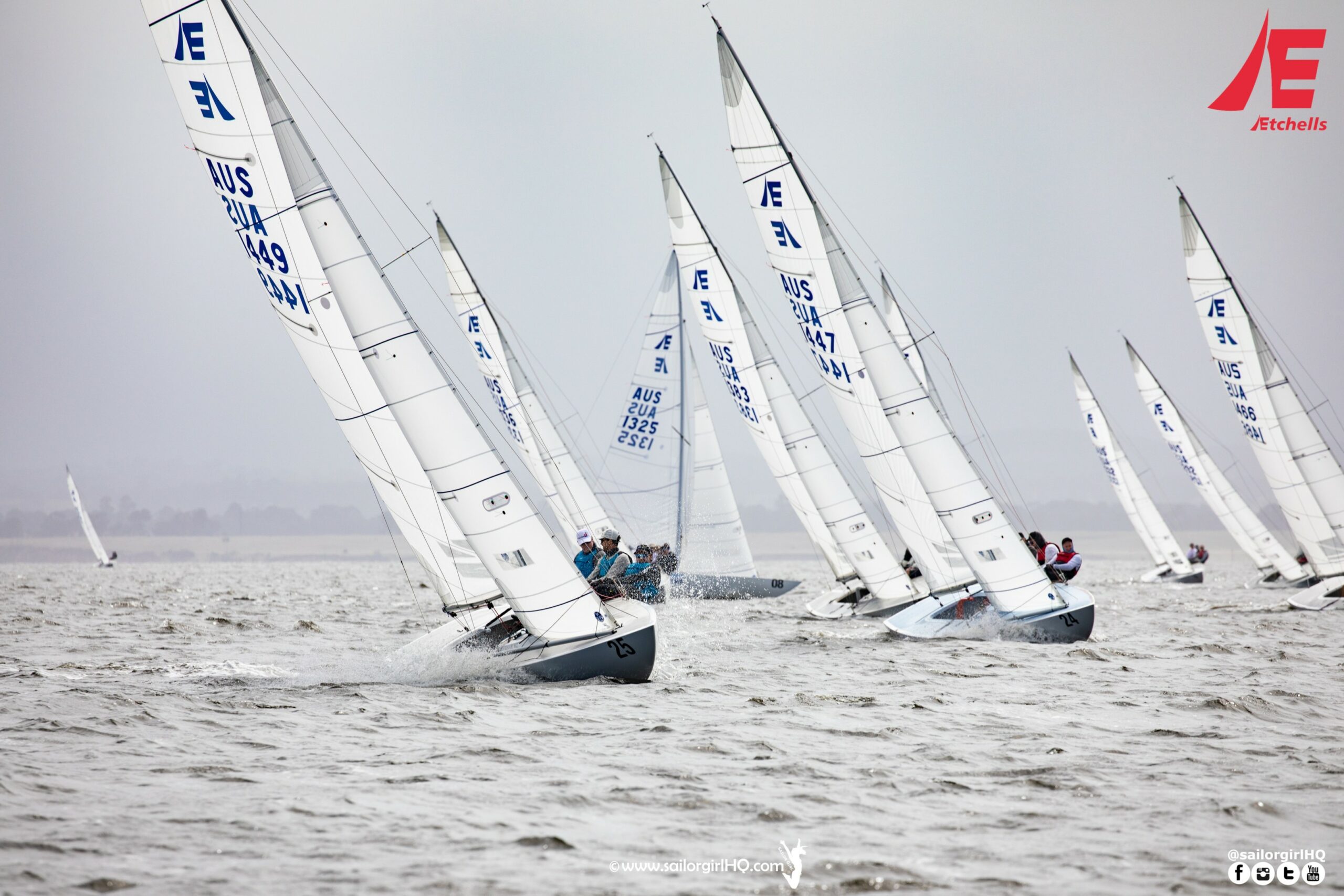 Lisa Rose AUS1449 leading the pack back from the left hand side. Pic - Nic Douglass @sailorgirlhq 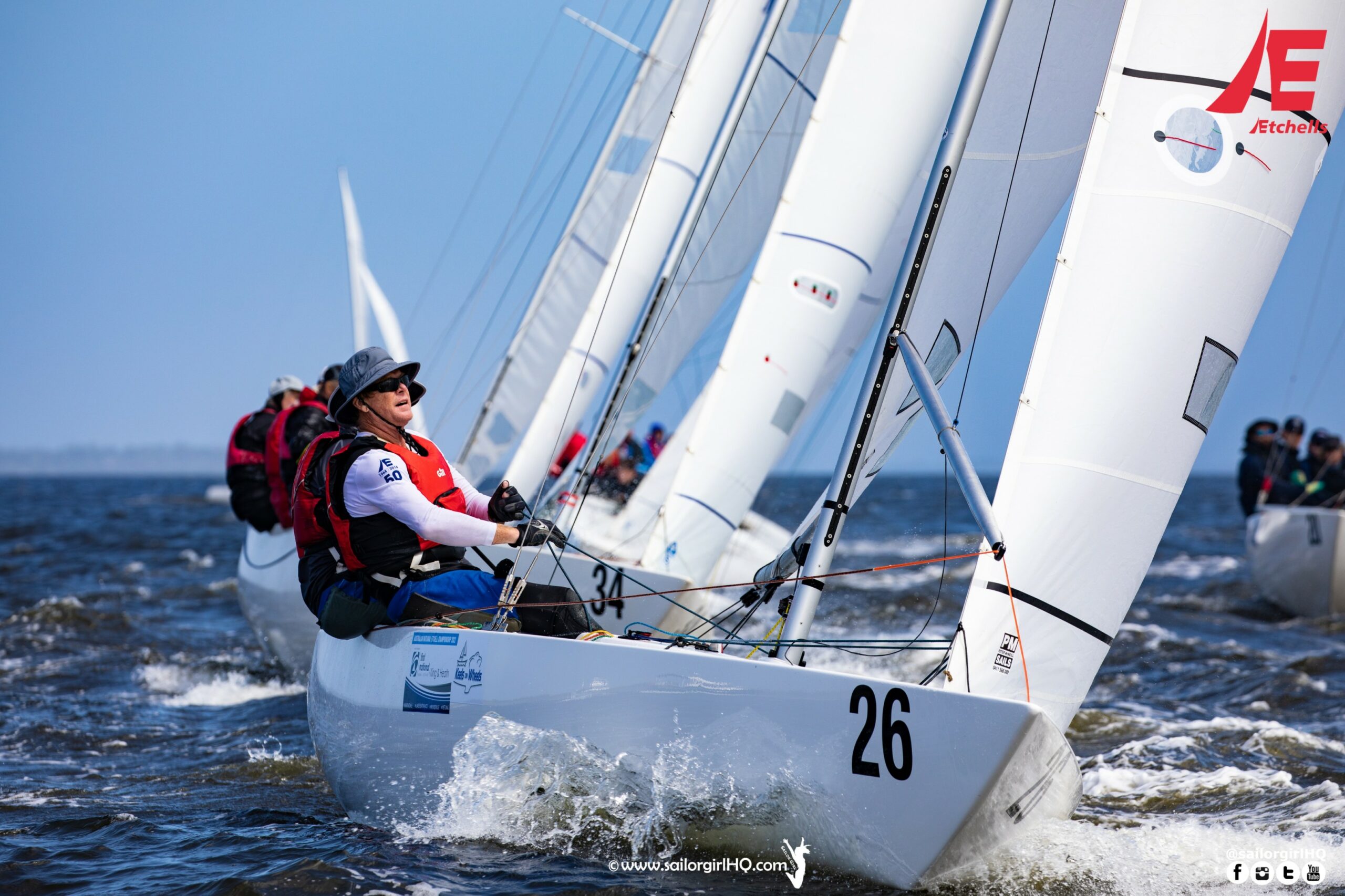 With many overlaying the top mark the whole fleet descended at once. Pic - NIc Douglass @sailorgirlhq 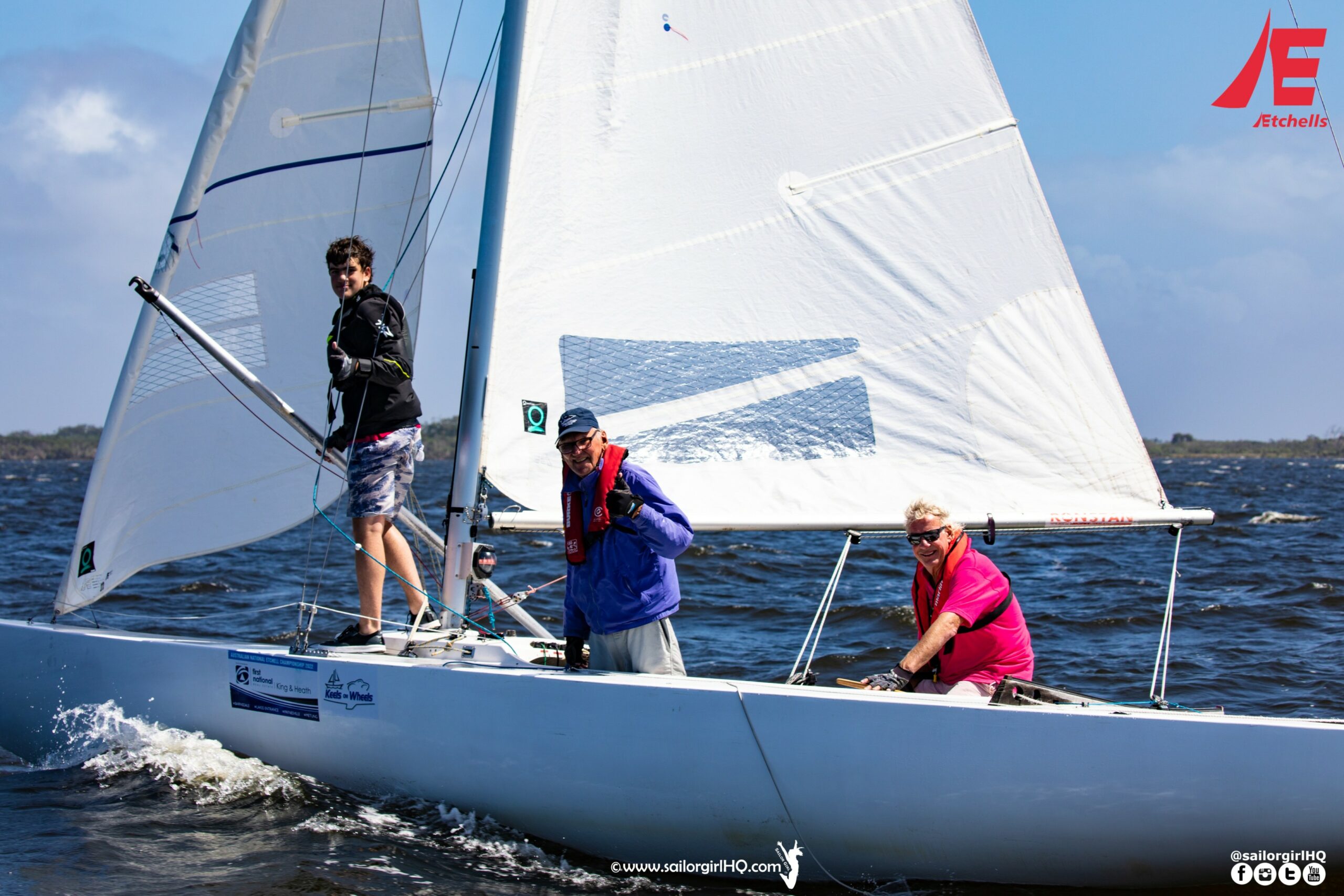 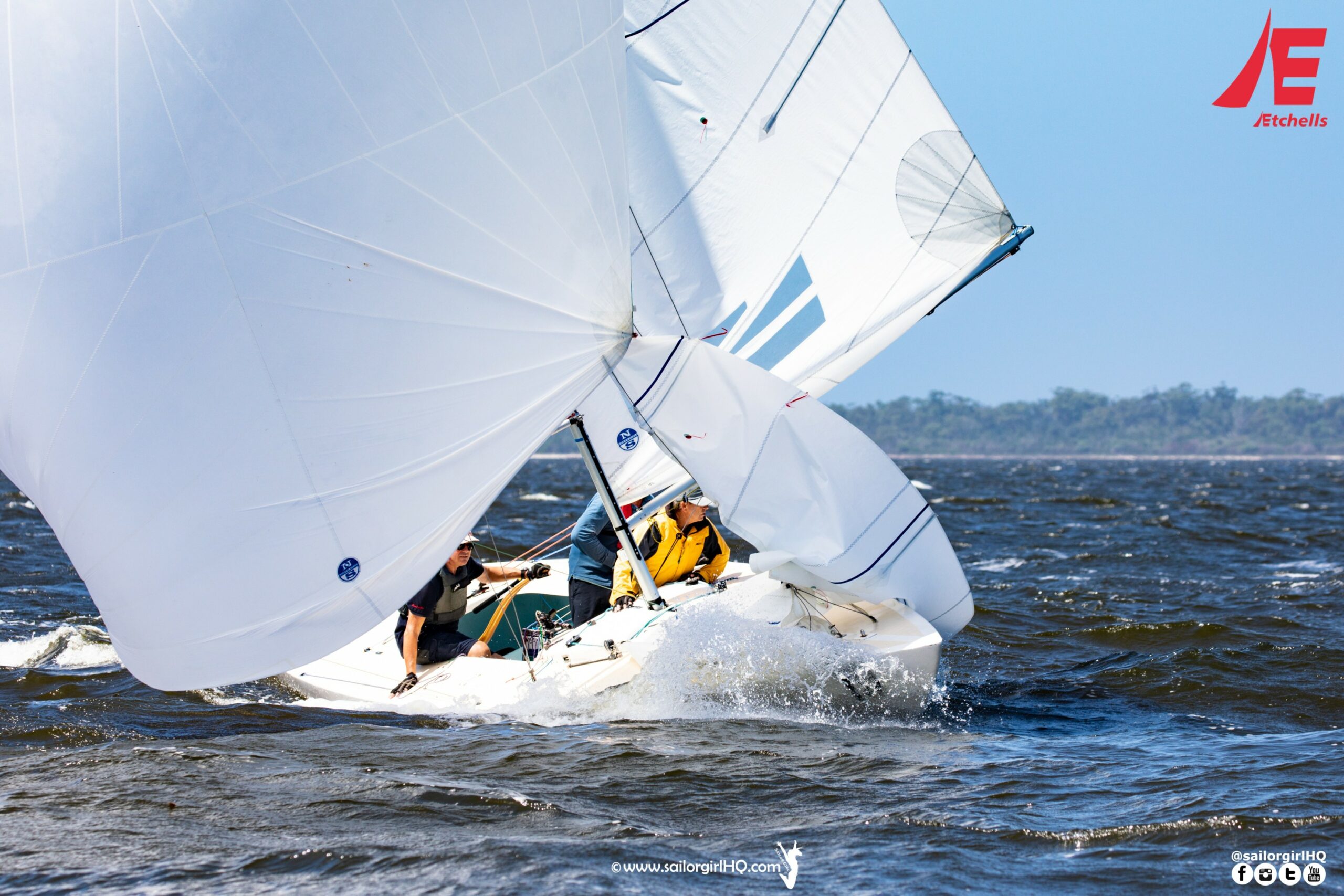 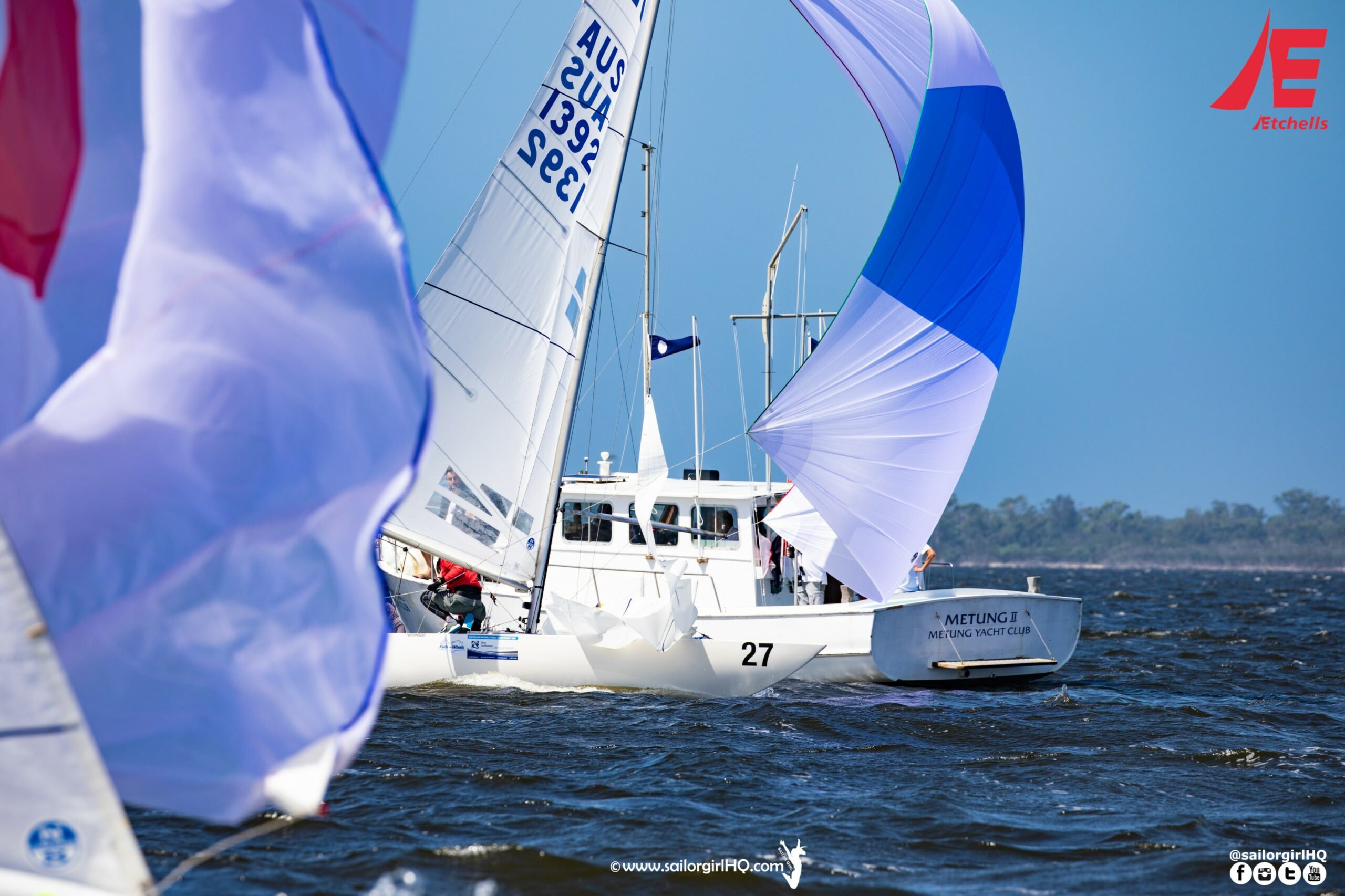 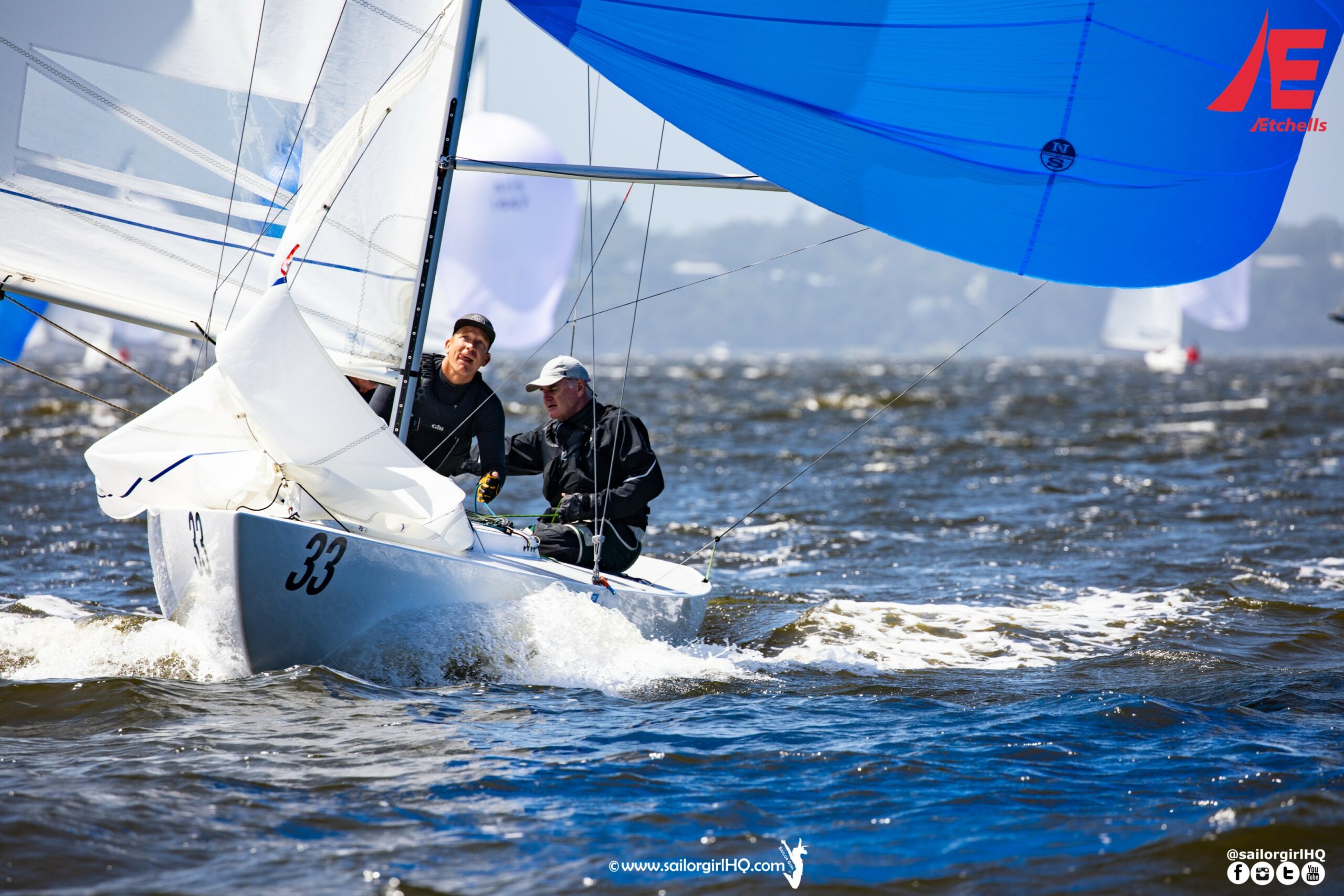 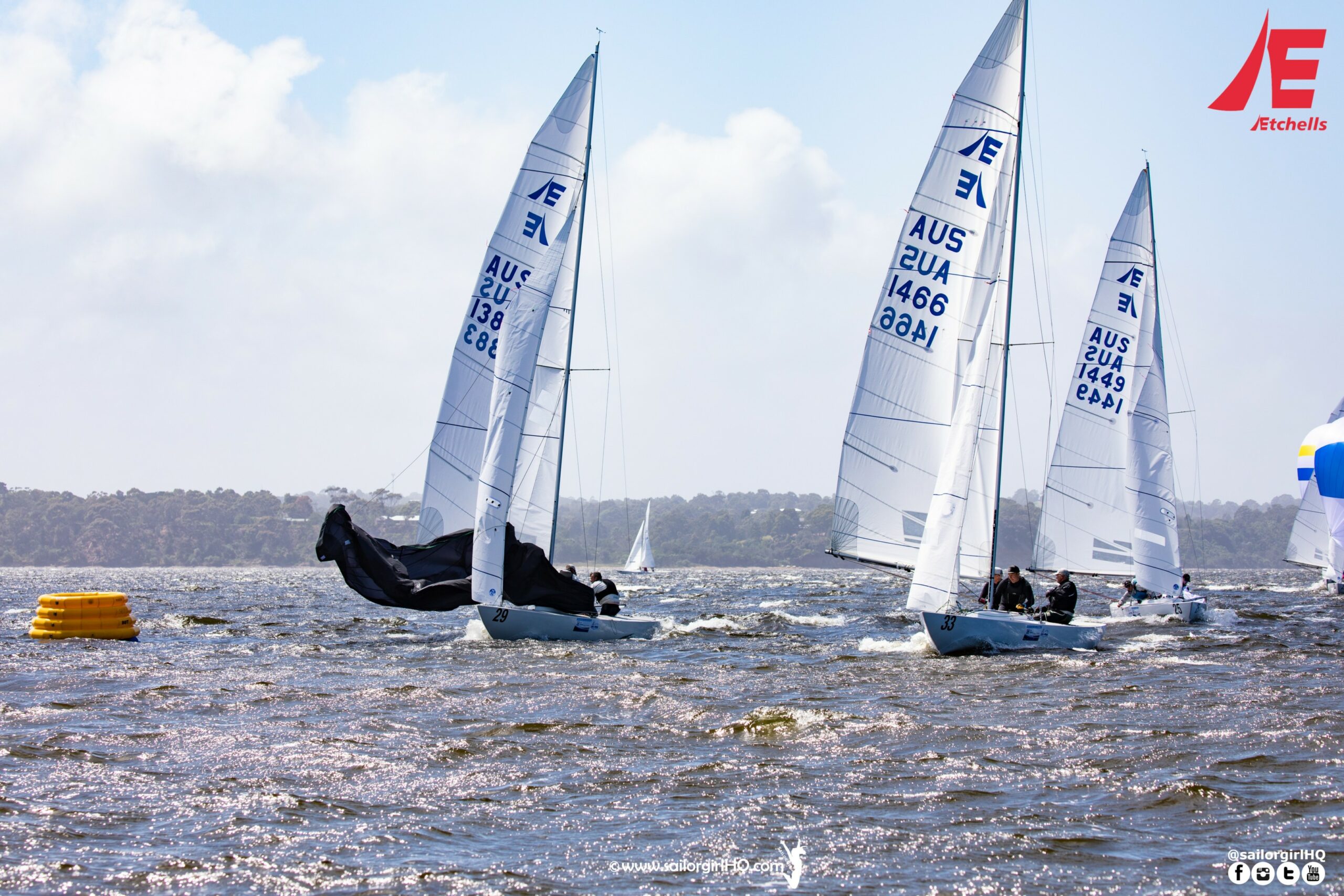 The Etchells Australian Championship kicked off yesterday from the Metung Yacht Club, Victoria, with 28 boats lining up for three races in strong, steady conditions.

The first race of the regatta was set at 075 degrees in 17 knots of breeze and quickly showed itself to be a speed track for the 1.3 nautical mile two-lap course, with an outgoing tide favouring the top left-hand approach.

Tango AUS1466 had a fantastic run and closed the gap, moving into second. Vincero AUS1383 rounded in first position, but with a slow drop and a wide rounding, the lead was for the taking for Tango AUS1466.

Hampton’s AUS1466 led around the top mark with a gap back to the fleet, and weren’t challenged to the finish, Triad AUS1383 would have finished second, except they didn’t finish through the correct finish line and by the time they returned had to settle for tenth. Lisa Rose AUS1449 was happy to snatch second place, Vincero AUS1343 finished in third, Tranquility Base AUS1377 fourth and Thelastone AUS1392 moved into fifth.

Race two started with an identical set up to race one, with a slight increase in pressure. Excite AUS1332 were quick to pull the trigger at the start and called for an individual recall. The boat to leeward of them was Lisa Rose AUS1449, who had the best start and they were not headed for the duration of race two.

As most had identified a top-left favour, a large proportion of the fleet were left of centre on the first work, and many overlayed the first mark making for an entertaining rounding for the building spectator fleet.

At the first gate, Avalon AUS1447 opted for the right-hand turn, and slipped into second behind Lisa Rose AUS1449 who rounded on port. Triad AUS1383 and Tango AUS1466 also opted for the left-hand turn.

At the final top mark, the placings were identical for the top four, followed by Vincero AUS1343, Peter McNeill, Andrew Smith and George Johnstone on Lucy AUS1082, Thelastone AUS1392, and Go With The Flow AUS1336, Ireland Girl AUS1325 skippered by Kim McKendrick with Marcus Burke and Noel Drennan, and Jason Ward’s Whisper AUS1457 with Darren Jones and Silas Nolan in tenth.

At the finish, Hill’s Lisa Rose AUS1449 was followed by Bellingham’s Avalon AUS1447, and Hampton’s Tango AUS1466 moved into third to keep the overall placings seriously tight. Fourth was Triad AUS1383, and Vincero AUS1343 rounded out the top five.

Race three, the course was set at 085 following the gradual shift to the right during race two with a raining cloud. The breeze strength was flicking above 20 knots at times, and the beat was still set at 1.3 nautical miles.

Kim McKendrick’s Ireland Girl AUS1325 with Marcus Burke and Noel Drennan were able to make the most of the first beat rounding in first, Thelastone AUS 1392 was second after a cracking start, Lucy AUS1082 skippered by Peter McNeill was third, Lisa Rose AUS1449 who were the most conservative up the first beat were fourth, followed by Whisper AUS1457, Avalon AUS1447, V for Vendetta AUS1079 and then Tango AUS1466.

Lisa Rose AUS1449 had a brilliant second work to move into first position, and finished on top, with Tango AUS1466 leap-frogging to second position and Whisper AUS1457 skippered by Jason Ward with Darren Jones and Silas Nolan slid up to third for their best result so far.

Will it remain a two-boat race on the second day? We will keep you posted via our live coverage.

If you are in the local area, we are commenting on VHF71, and are more than happy to explain or answer any questions. Or you can watch on Facebook via Etchells Australia.

This regatta would not be possible without a fantastic group of sponsors, led by major sponsor King & Heath First National Real Estate, as well as the brilliant team of volunteers working out of the Metung Yacht Club, including the Race Management team, headed by Ross Wilson, backed up by Kevin Wilson.

The media sponsor for this event, and a number of other Etchells Australia events this year is a major supporter of the class, HillPDA. Thanks to our other photographers who are onsite for the event, McPherson Photography and Lenka Senkyrikova.

Also, in Metung this weekend are the new Mark Set Bot buoys. This groundbreaking technology is being showcased as a sustainable and more efficient method for laying sailing marks. No anchors are required as the electrically motorised inflatable marks are plotted to a GPS coordinate.

For the full results, see: https://metungyachtclub.com.au/results/2021-2022_etchells_national_championships/index.htm?TY=23509