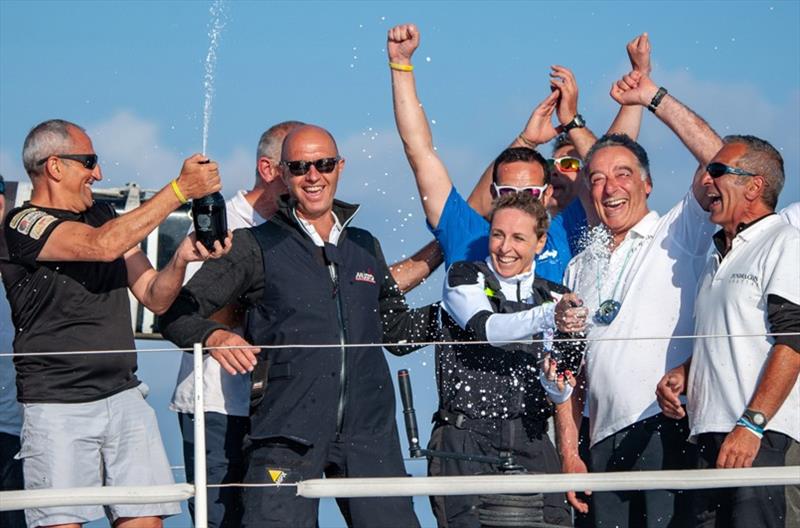 Generally match races last around 20 minutes and there is a clear winner, but in the 151 Miglia-Trofeo Cetilar 2018, there was a 10 hour long heavyweight maxi bout for line honours between Nicola Paoleschi's Laurie Davidson 69 Pendragon VI and Miguel Matias Galluccio's RP 86 Vera.

Pendragon VI was the winner of line honours in three of the last four races, while Vera was the IRC winner in 2016 when she was Pier Luigi Loro Piana's ‘My Song’.

Vera led at the mark off Marina di Pisa and then extended down the 55 mile fetch to the Giraglia rock off north Corsica. However, soon after, at around 2200 CEST, the dark blue maxi fell into a wind hole and parked. This enabled Pendragon VI to catch up and for the next 90 miles to the finish off Punta Ala, the two maxis remained in contact.

At 0730 this morning, as they rounded the last mark of the course at Scoglio dello Sparviero, Pendragon VI had not only drawn level but was holding 'rights' in the right as the two boats came together for a cross within metres of the line. This caused her fourth line honours win, by just 15 seconds.

“It was very exciting for both of us,” said Nicola Paoleschi. “All of the race we were very close. We stopped only for a few minutes after Giraglia – that area is difficult every year when the sea breeze finishes, but we did well always to find sufficient wind to move.”

Sailing with a largely amateur crew, Florence-based Paoleschi was also proud to have set a new race record for the 151 Miglia-Trofeo Cetilar of 15 hours 30 minutes and 45 seconds, breaking the 16 hours 25 minutes and 23 seconds record set by set by Claudio Uberti's Ourdream in the 2011 race: “We set the first record with Sagamore, but that was beaten in the second year by Ourdream. So this year we have won 'our' record back.”

Vera's star crew arrived beaming, even if she was out of place. Alessandra Sensini is a household name in Italy, having won four windsurfing Olympic medals including gold at Sydney 2000. Since retiring after London 2012, Sensini has taken up desk jobs with the Italian Olympic Committee and Sailing Federation, and not ventured afloat:

“After London 2012 I was tired and I started working, but I called a friend of mine who said he was doing the 151 Miglia and I said '…maybe I'll come too!' The race is really cool – plus my city, Grosseto, is nearby.”

SuperNikka held a small lead rounding Giraglia but then on two occasions around Elba SuperNikka got stuck less than her rival, resulting in her 16 minute real time lead at Formiche di Grosseto, the most southerly mark of the course.

Sadly they were becalmed just short of the Scoglio dello Sparviero turning mark, off Punta Ala. This enabling Atlanta II to close, but ultimately SuperNikka finished 11 minutes 25 seconds ahead (just over five minutes under IRC).

“Finally we had a 151 Miglia-Trofeo Cetilar with constant wind and pressure,” said Lacorte, who is also International Maxi Association Vice President.

SuperNikka's race time was some seven hours faster than in 2017. Lacorte said the leaders had not been caught by the final slow-down and the 20 minutes that had stalled them was the same as the leader's advantage on corrected time.

Atalanta II's tactician, former Luna Rossa America's Cup skipper Francesco de Angelis, confirmed that passing Elba had been tricky. “We got parked so the boats behind closed in and closed in again…

“Passing Elba was tricky – you only need to make a little mistake that will leave you parked for a long time.” The finish port of in Punta Ala was where de Angelis was based for the first two of Patrizio Bertelli's America's Cup challenges.

Owner Carlo A. Puri Negri observed that it had been largely a 'soldier's race' – all fetching/reaching, little beating/running.

“When you go to Giraglia often you are upwind, but this was more downwind and straight line with the Code 0, trying to go fast. I prefer it when there is more tactics and you have more opportunities.”

However he was pleased how quickly they had finished. “In past races I have never arrived this early. I said to my wife 'I'll see you on Saturday' but I had to call her back and tell her 'I'll see you on Friday.'”

For Puri Negri competing in the 151 Miglia-Trofeo Cetilar is part of his challenge to win the International Maxi Association's 2017-18 Mediterranean Maxi Offshore Challenge, of which this is the third event. To maximise Atalanta II's chances he intends to compete in four or the series' five events (the best three count).

Ultimately Vera claimed the maxi boat IRC prize for boats of more than 60ft LOA, finishing on corrected some 22 minutes ahead of second placed SuperNikka with Atalanta II third and Pendragon VI fourth.

International Maxi Association Secretary General Andrew McIrvine, who competed on board SuperNikka, said: “The 151 Miglia has been a great experience both as a race on board SuperNikka – the course is spectacular – and as an event – the great atmosphere and the attention provided to owners and crews. Now I am looking forward to the party in Punta Ala tomorrow.

“The International Maxi Association is working hard to increase participation of maxis in offshore races and develop relationships with Italian yacht clubs. This is why we have been promoting the Mediterranean Maxi Offshore Challenge for the last three years, incorporating the Med's five best offshore races.”

In the meantime the next big event on SuperNikka's calendar is September's Maxi Yacht Rolex Cup, organised by Yacht Club Costa Smeralda and the International Maxi Association and while for others the focus is on the remaining two events of the Mediterranean Maxi Offshore Challenge: Giraglia Rolex Cup (offshore race), starting on 13 June and the Palermo to Montecarlo Race on 21 August.