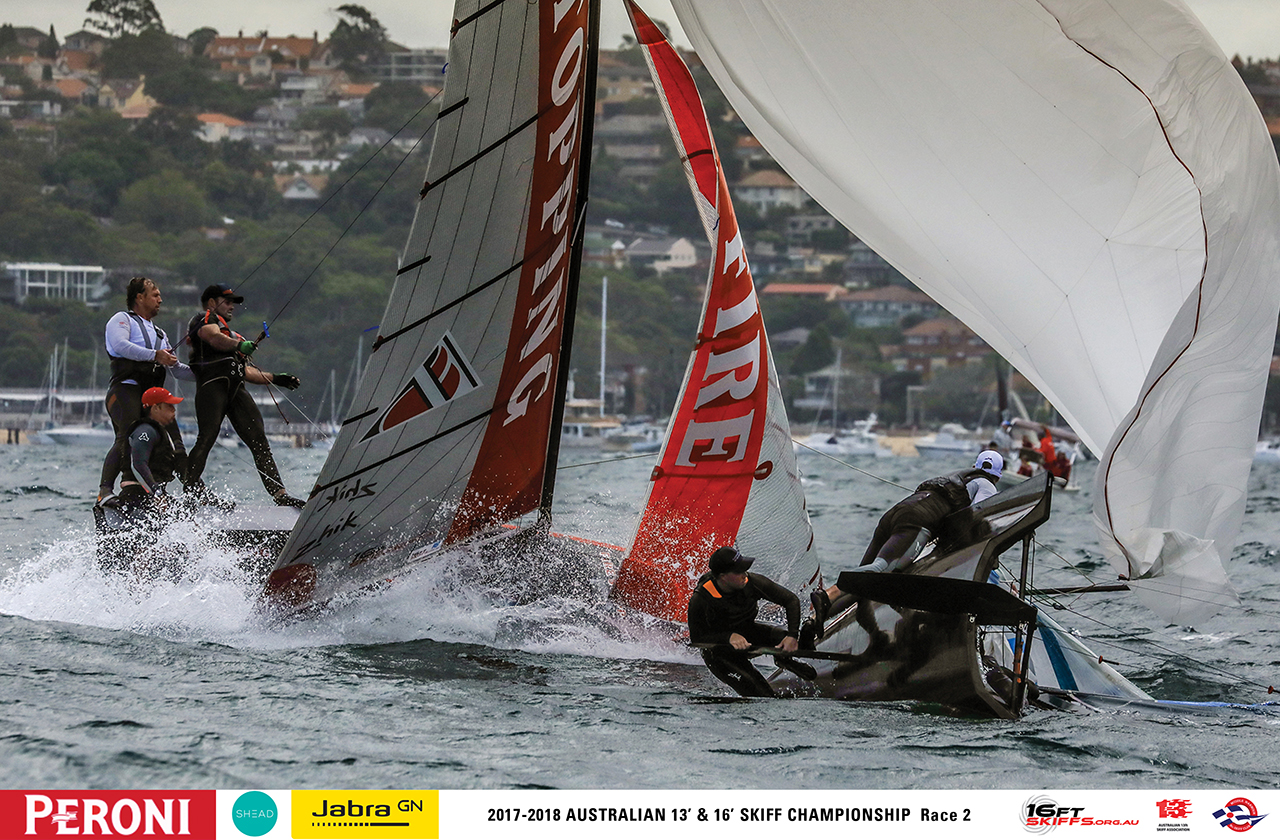 Day 2 of the Peroni 16 and 13 foot Australian Championships was a different game to the initial opener. The fleet was greeted with an immediate dilemma as the breeze teetered between a big or small rig. Crews lamented … their final decision will the wind kick or die?

In the end 75% of the fleet bet on the conditions to build and opted for their small rigs. Ironically it was the more senior competitors who selected their big rigs; as my lanky sheethand once said on many occasion “Big Race – Big Sail”. However which selection would prove to be the right one?

Today’s start had choppy conditions with an increasing swell from yesterday with a good 15 knot ESE breeze; it was border line who made the right decision on rigs.

The fleet behaved well with the need for a single start. Local knowledge came into the game with the main fleet favouring the left side of the course. Those trapped or prepared to roll the dice went hard right immediately, which proved to be the kiss of death.

Middle Harbour’s Eric Storage led by Harry Lawson was the bravest and went as hard left as North Head would allow and it paid huge dividends and they lead around the top mark by a good 400 metres followed by Clint Bowens “Fluid Building” and other challengers including Nick Connors, “Cunninghams” were in hot pursuit.

Yesterday’s winner “Sutech” hit the top mark at least 1000 metres in arrears but in a 5 lap event it’s early days. To give this perspective the leader was gybing for the bottom mark as some were still struggling to navigate the first mark. A huge spread opposed to the first heat.

The breeze lightened on the 2nd leg with the fleet now knowing left pays, it was now a game of speed; tactics have been taken off the table.

Here come the big rigs with Fluid grabbing back almost 500 meters through raw speed and determination and taking the lead at the second top mark. However disaster strikes as they capsized setting their spinnaker. One boats pain is another’s gain as Byryens toke the lead with Erics just 1 second behind. Small rigs hurt that run .. for now.

In the 13 fleet it was Bartley Construction closely followed by Zac Barnabas in “The Kitchen Maker”, the Grandson of Trevor, the multi winner of yesteryear 16’s and 18’s titles; proving it is still in the gene pool.

From then on it was the battle of the big rigs v little rigs as conditions changed each lap. Many crews spent some time on the ‘righting lever – aka centerboard’ as they pushed their machines to maximum speed and beyond.

As a special mention is “Newcastle Psychiatry” skippered by 15 year old Bethany Sherry who smiled at the camera whenever we went past; I spent a few minutes heading back to the club with her Mother and younger sister who were as proud as punch. This is the future of our class – GO GIRL.