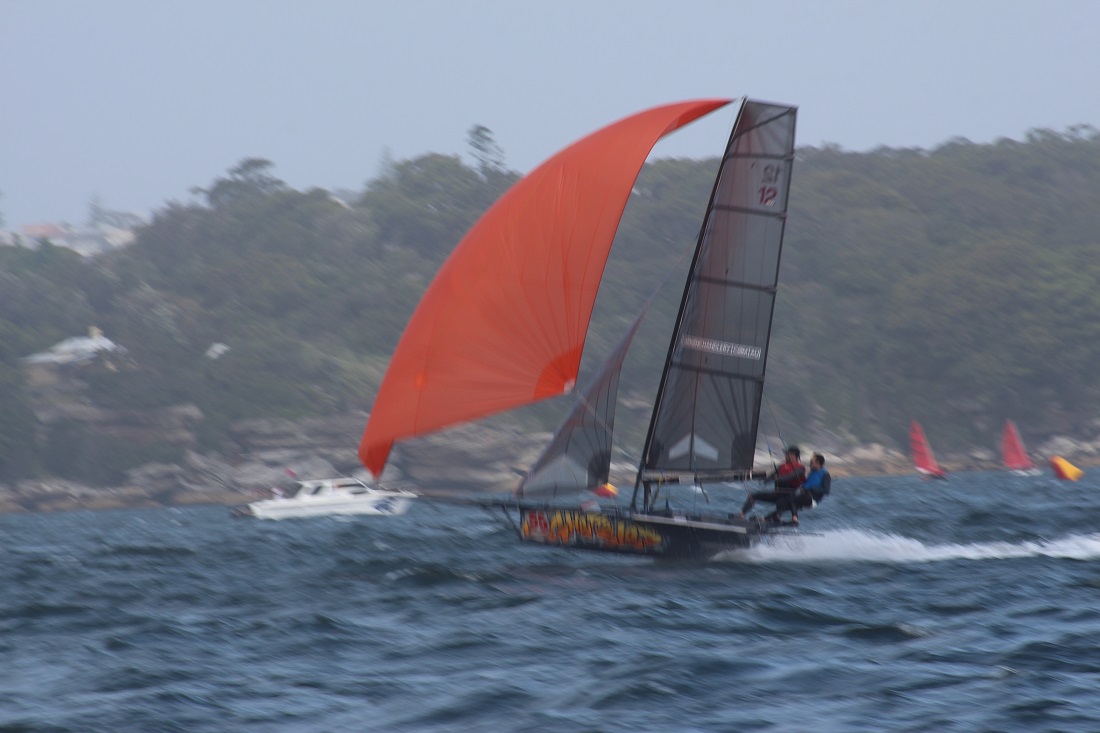 Day 1 of the Your Move Convenyancing 12ft Skiff Interdominion provided both thrills and spills in a stiff southerly that kicked in just before the 3pm start on Sydney Harbour today, with Brett Hobson/Jeremy Jones crewed Geotherm winning a battle of wills with eternal NSW rival, Sydney Sailmakers (Nick Press/Andrew Hay).

The Harbour was bumpy and the southerly at times at 25 knots, but later in the opening race, the bumps changed to waves. It was tricky sailing for all concerned and hard to stay upright.

Geotherm got off the start best – at the pin end. “We weren’t aiming for the pin, but found ourselves there,” Geotherm’s skipper, Brett Hobson from Killara said.

Karoshi (David and Alison Molloy) from NSW was above Geotherm and also got away well off the Athol Bay start.

Geotherm sailed clear of the rest heading to Point Piper the first time, with Gladesville skipper Nick Press giving chase. Then it was down to Chowder Bay, spinnakers flying. Many had thrilling rides down to Chowder, Hey Charger! (Nick Bernard/Oscar Wilson, NSW) and Giddy Up (Paul O’Malley-Jones/Ben Roxburgh, Qld) among them, becoming airborne.

“Chris Skinner (Kiwi entry Jackson Electrical, crewed by Chris Holland) was hanging around a bit to Chowder Bay. He almost crossed us going back to the Rose Bay mark,” Hobson commented on the pair who finished the Interdominion third in New Zealand last year.

“Going through a gybe, Nick (Sydney Sailmakers) rolled over the top of us, but there wasn’t much in it up or downwind.” And while the two sailed cleanly, carnage was the name of the game behind them, with many capsizes and a few breakages.

Then Sydney Sailmakers was in trouble: “Our boom vang broke halfway up the last beat,” Hay confirmed. However, it took until the last downwind for Geotherm to reel his rival in. The two powered from Rose Bay towards the finish, Geotherm holding the advantage.

Coming in to the finish, Hobson had to make a decision – gybe under spinnaker to make the mark, not gybing and possibly miss the finish line, or drop the kite – all risky moves, as Press/Hay were bearing down fast with a big black kite and had laid the finish line nicely.

In a heart stopping moment, Geotherm dropped her kite around 200 metres from the finish, slowing her down, while Sydney Sailmakers was coming at them at full speed, but Geotherm finished first, with seconds to spare.

“I thought it would be touch and go making the finish (under spinnaker) so we made the decision to not gybe the kite – we dropped it and sailed to the finished with a jib. I felt we had time to do that,” Hobson recalled.

“It was good to race so closely with them (Sydney Sailmakers) all race and to get up the win. I don’t know how it would have finished if they hadn’t broken their vang – it was that close.”

Jackson Electrical finished a distant third, nearly capsizing while gybing for the finish line at Athol Bay. A second Kiwi entry, Ugly Stick (Simon Ganley/Oliver Scott-Mackie) finished fourth. The rest of the 35 boats finishing were strung out along the course, or retired.

The Bird (Jamie McCrudden/Glenn Farquhar, NSW) were among those that incorrectly timed their gybes going into the finish, finding themselves in the drink before righting and finishing.

Behind them, a thunderstorm was brewing and many were caught in it. Eventually all made it safely back to the Sydney Flying Squadron. The oldest open boat sailing club in Australia is hosting the 59th Interdominion.

Hey Charger! was among those caught, limping home with a shredded jib, but they were by no means last.

A spectator ferry will follow the final day of racing – 12th January. Tickets for the ferry can be purchased via the Sydney Flying Squadron website: www.sydneyflyingsquadron.com.au. The ferry will depart the wharf at the club at 2pm. Drinks can be purchase on board. We recommend having lunch at the club (restaurant or cafe) prior to heading out on the ferry.