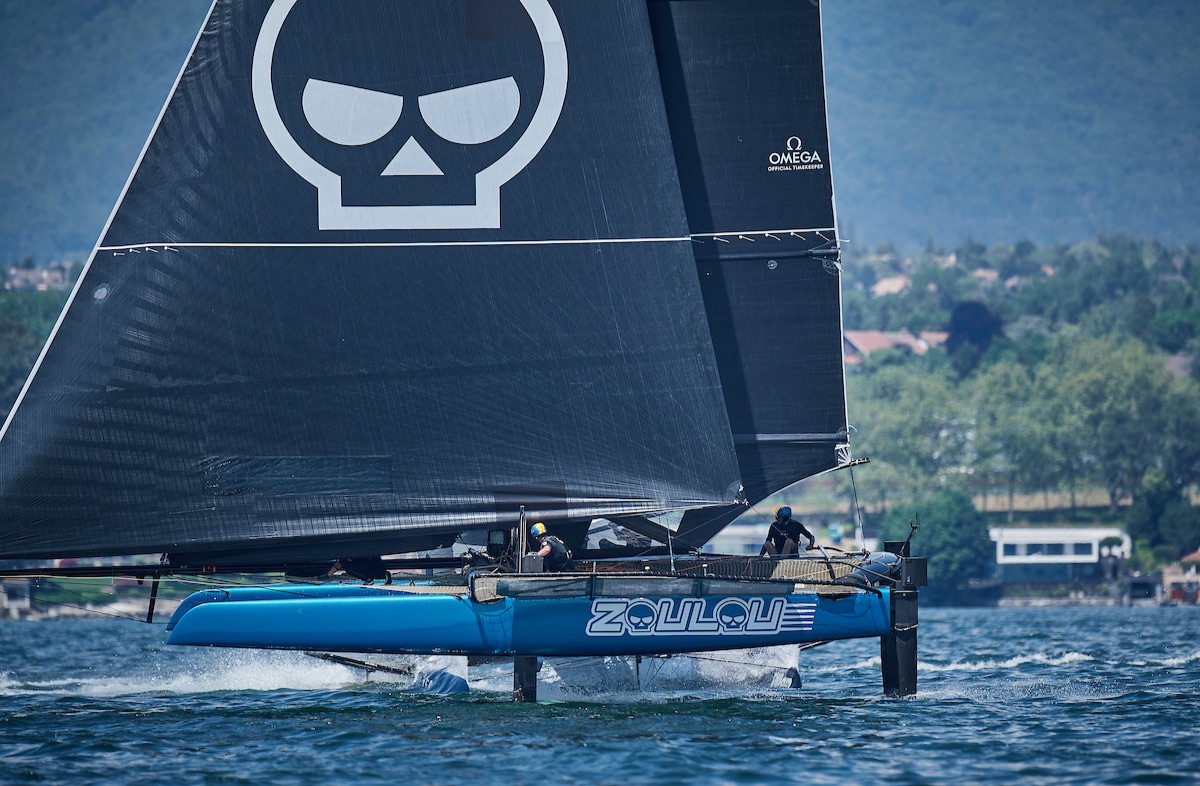 The TF35 Mies fleet racing was paused today to allow the seven TF35s to join more than 250 other boats to participate in the iconic Genève-Rolle-Genève long-distance race: the prologue to the Bol’Or Mirabaud.

After 30 nautical miles of racing in a fickle south-westerly breeze that flitted between 5-10 knots, where the lead changed on a number of occasions, Zoulou took the winners gun in less than 3 hours 30 minute, two minutes ahead of second-placed Alinghi.

“We started the day in rain and watched Alinghi almost capsize. Then we were in the leading pack as we left the Petit-Lac, were left behind as the fleet crossed to Rolle but then fought back to win the race.” explained Zoulou’s exhilarated owner and helm Erik Maris on the dock.

“It is the kind of race where we know that everything can still change in the last moment. Nothing can ever be taken for granted and you have to work hard and keep hope,” he added.

It was an exciting start to the day for Ernesto Bertarelli’s team Alinghi. The local crew delighted spectators in the rest of the fleet with a huge broach and very near capsize less than 100m over the start line as a gust hit them out of nowhere.

Team SAILFEVER took the early lead, but a wind hole off Corsier kept the fleet compressed as she hugged the shoreline.

In an early split, Team SAILFEVER, Ylliam XII – Comptoir Immobilier and Alinghi venture out into the mid-lake near Mies, only to be stopped in their tracks as the wind went soft. A shift favouring the trio inshore paid, allowing Zoulou, Spindrift and Realteam Sailing to extend away.

As the fleet passed the turning mark in Rolle, the breeze dropped to a flimsy 6 knots, but the TF35s were still on their foils. Realteam Sailing led the pack, followed by Alinghi, Spindrift and Team SAILFEVER in quick succession. Ylliam XII – Comptoir Immobilier a few boat lengths behind followed by ZEN Too, who squeeze around the make ahead of Zoulou.

In the final stretch of the race from Versoix to Geneva, Ylliam XII – Comptoir Immobilier did her best to hold onto the lead but was ultimately outpaced by Zoulou and Alinghi, who finished the Genève-Rolle-Genève first and second respectively.

Spindrift did enough to hold on to third with Team SAILFEVER chasing hard to take fourth. Ylliam XII – Comptoir Immobilier crossed the line in fifth in front of halfway leaders Realteam Sailing, who ended the race in sixth with ZEN Too in seventh.

Tomorrow the fleet racing will resume for the TF35 Mies, with the first race start planned for 11.30CEST.