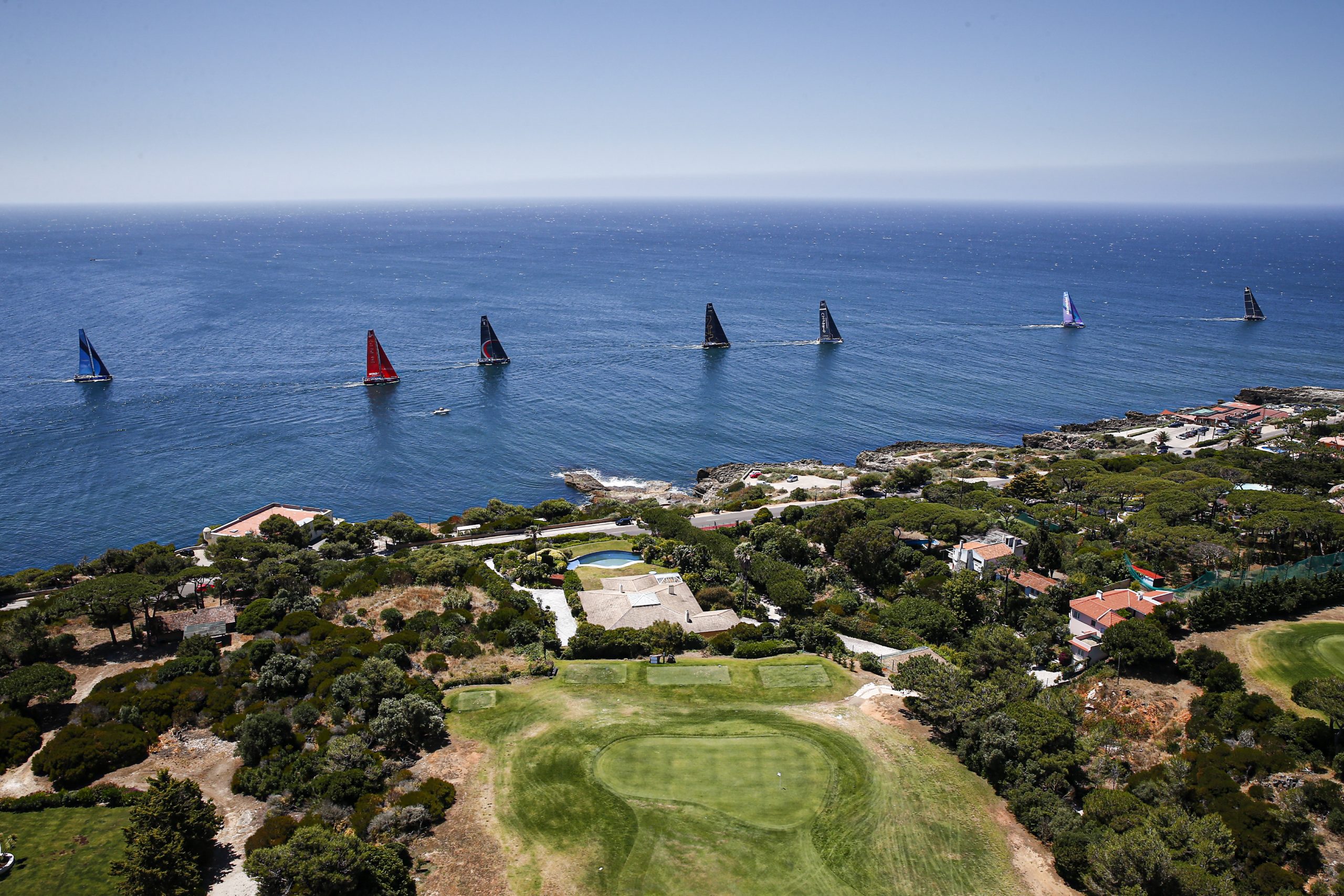 The fleet spreads out - Sailing Energy pic - The Ocean Race

The Ocean Race Europe fleet returned to competitive action in Cascais, Portugal today where the 12 international teams representing nine countries took on the Mirpuri Foundation Sailing Trophy coastal race ahead of the start tomorrow of the second offshore leg to the city of Alicante on the Mediterranean coast of Spain.

Competing crews arrived in Cascais on Wednesday, at the end of a fast and furious three-day opening leg Lorient, France in which there were breathtakingly close finishes in both the VO65 and IMOCA 60 classes.

Crews had just a few days for rest and recuperation before returning to the racecourse for today’s four-hour 40-nautical mile sprint from Cascais to the Portuguese capital Lisbon and back.

In what was a dress rehearsal for tomorrow’s leg two start, the course for the coastal race initially took the fleet on a tight northwest reach from the town’s waterfront to a turning mark at nearby Cabo Raso.

From there, a long downwind leg gave the crews plenty of gybing practice as they jockeyed for position on the way to a marker southeast of the entrance to Lisbon’s Tagus River. The final leg was a long beat back upwind again to the finish line positioned off the Clube Naval de Cascais.

Conditions were close to perfect for racing, with blue skies and warm winds ranging in the 15–20 knot range.

“It’s going to be about a four-hour race,” said AkzoNobel Ocean Racing skipper Chris Nicholson dockside before the start.

“So it’s not long, but it’s certainly not quite a sprint either. Normally for an in-port race, you wouldn’t even be stacking the sails side to side. But at this course length, yeah, it’ll be full stacking, for example. So in a lot of ways, it will be a bit harder than normal.”

As the day progressed, he was proven right. The racing was characteristically tight amongst the fleet of seven identical VO65s. Cascais-based Mirpuri Foundation Racing Team held a narrow lead at the first mark over Nicholson’s team and this pair were tied neck and neck as they rounded the leeward mark at the bottom of a long downwind leg.

The local team then put their local knowledge to good use on the final upwind section to the finish, crossing the line first for a three-point win. AkzoNobel Ocean Racing took a close second for two points, with Sailing Poland, led by Dutch skipper Bouwe Bekking claiming one point for third.

“It was just awesome to get out today and show everyone what we could do,” said Mirpuri Foundation Racing Team sailor Jack Bouttell. “We wanted to put on a good show in Cascais and it’s fantastic to give back after what Paulo (Mirpuri) has given us the chance to do.”

In the IMOCA 60s, Charlie Enright’s American entry 11th Hour Racing Team made most of the early running, but having led the five-boat fleet around the first two marks, on the way back upwind the United States foiler could not hold off the non-foiling Sailing Team Germany, skippered by Germany’s Robert Stanjek.

“I think we managed very well in the conditions which were not suiting us, we managed to survive and keep in contact,” said German skipper Robert Stanjek.

“Then we just had a smashing downwind and Ben (Dutreux) made a really good layline calls and we were in a good flow and we just closed in. I think technically we sailed pretty smart on the last upwind. It’s a great feeling ahead of the leg two start tomorrow.”

Starting Sunday June 6 at 1300 local time in Portugal, the course for second leg of The Ocean Race Europe first takes the teams south to Portugal and Europe’s southwestern-most headland, Cape St. Vincent, before the yachts turn south-east towards the Strait of Gibraltar – the narrow and highly congested waterway between the Iberian Peninsula and Morocco, Africa which marks the entrance to the Mediterranean Sea.

From there the most direct route to the finish in Alicante is along the Spanish Mediterranean coast. However, depending on the prevailing weather conditions the crews may opt to sail a longer route further offshore, in the hope of finding better winds that will get them to Alicante quicker.

In contrast to the mainly straight-line fast-reaching conditions crews experienced on the three-day opening leg, the latest weather models being pored over by the team’s navigators in Cascais this evening suggest the second 700-nm/1,297-km leg will be a longer and more complex affair, featuring several key transitions between weather systems for the crews to deal with.

In particular, the passage from the Atlantic Ocean to the Mediterranean Sea through the Strait of Gibraltar looks set to be a wild and windy experience where the funnelling winds are expected to peak at 35 – 40 knots.

“The leg is going to be intense,” said France’s Yoann Richomme, skipper of the Portuguese entry Mirpuri Foundation Racing Team.

“It’s a very long downwind all the way to Cape St. Vincent and then a big transition before coming into some very strong winds at the Strait of Gibraltar with maybe some tacking on the Moroccan coast. Then it’s [into] the Med, so the wind is going to be a little bit on and off. It’s going to take quite a bit of time, almost four days to get to Alicante.”

Having incurred some bumps and bruises amongst the crew the first leg, Ambersail-2’s Lithuanian skipper Rokas Milevičius said the team would be taking extra measures to ensure everyone on board the VO65 stayed safe on the passage to Alicante.

“I think the next leg will be very challenging – very difficult safety-wise,” Milevičius said. “We had injuries already on the first leg, so we are taking extra precautions for the next one, because it looks like we are going to have a really bumpy, upwind ride through Gibraltar.

“Later on, when we are in the Med everything is calmer and easier to play – like the breeze and the light area – so should be fine. But I think the most crucial part will be the Gibraltar Strait and going in [to the Mediterranean] with the least damage as possible.”

The start of the second leg of The Ocean Race Europe from Cascais, Portugal to Alicante, Spain is scheduled for 1300 local time on Sunday June 6.