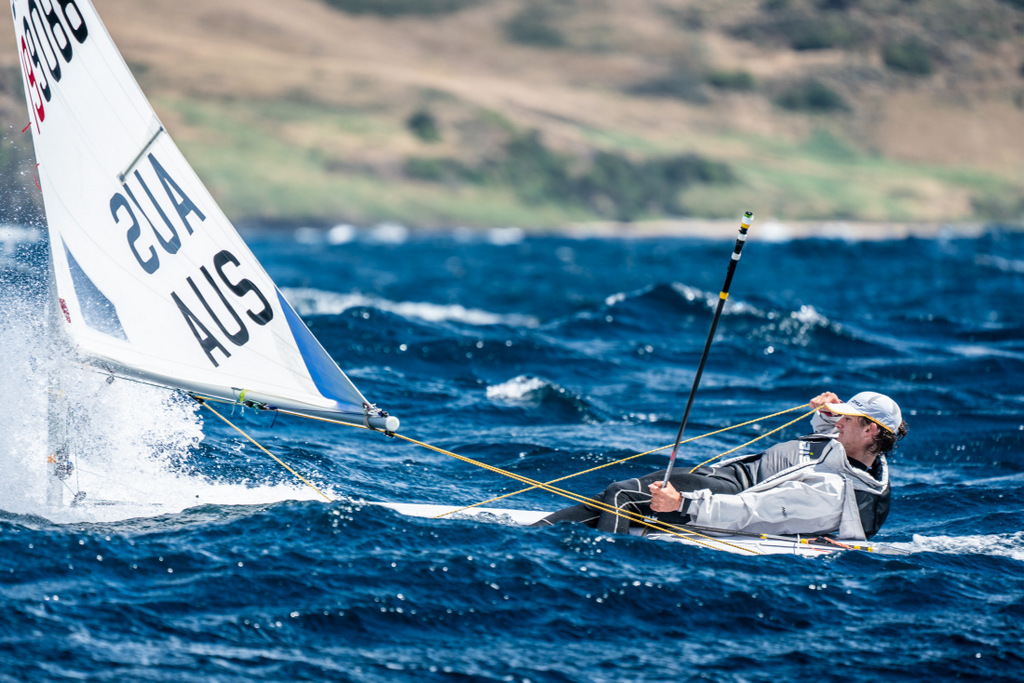 They waited and waited for wind, but when it piped in late this afternoon, it rewarded the 230 sailors with some exhilarating rides on day one of the Australian Sailing Youth Championships on Hobart’s River Derwent.

Most starts were delayed by an hour-and-a-half, but it was after 4pm when the Lasers, Radials and 4.7s finally got a proper start in. The 70-odd single-handed dinghies were still competing well after 6pm in a ‘twilight race.’

From way down the river, south-east of the Garrow Light, for most of the Laser sailors it would have meant nearly seven hours on the water.

Royal Yacht Club of Tasmania sailing manager, Nick Hutton, described the opening day of Australia’s most significant regatta for off-the-beach dinghies as “difficult, to say the least….we got two races in for the Nacra 15s and 420s…now ask me how many races we tried to start…the answer is six!”

The east/nor-east breeze filled in enough by 2.30pm to give stable conditions for the 29ers, Bic Techo 293 and Bic Tech Plus sailboards, 420s and Nacra 15s, and they all enjoyed a couple of hours of high-performance racing.

Tasmania’s strongest contingent is in the 29ers, and after two races, there were five local crews in the top 13 boats of the 32 boat fleet.

While no girls contested the Techno Plus, three are in the Bic Techno 293 fleet, with Josephine Kirby (Qld) the top placed girl. In the Boy’s, Benjamin Waters (WA) and Kai Morris Marns each had a win and third place with Jude Smale (Vic) third with a 2-4 result today.

In the Laser Radials, West Australian Zac Littlewood continued to show the form he displayed in the nationals at Devonport early in the week, scoring two straight wins here in the Youth Championships.

Frazer Brew (Qld) had a 3-2 score to be second, just ahead of Otto Henry (NSW) who has just moved from 420s to Lasers and finished second and fourth in today’s two races.

There were two winners in the Laser 4.7s – Daniel Costandi (NSW) and Caleb Palmer (Qld). However, Costandi also had a second place to give him 3 points to Palmer’s 6 points.

NSW Girl’s sailor, Brooke Wilson, sailed impressively to be third overall with 7 points from a 4-3 score with Kristen Wadley second girl on 11 points and sixth in combined standings.

There were also different winners in the 420s, with Ryan Littlechild/Jack Ferguson (NSW) heading the scoreboard with a 1-3 result, while the Race 2 winners, Cole Tapper/Tyler (Creevey) copped 18 points in race one.

Second overall are Ben Hinks/Alex Magarey (SA) after placing 2-8. Third are Marcello Torre/Tom Larkings (WA/NSW) with a 5-6 start to the regatta.