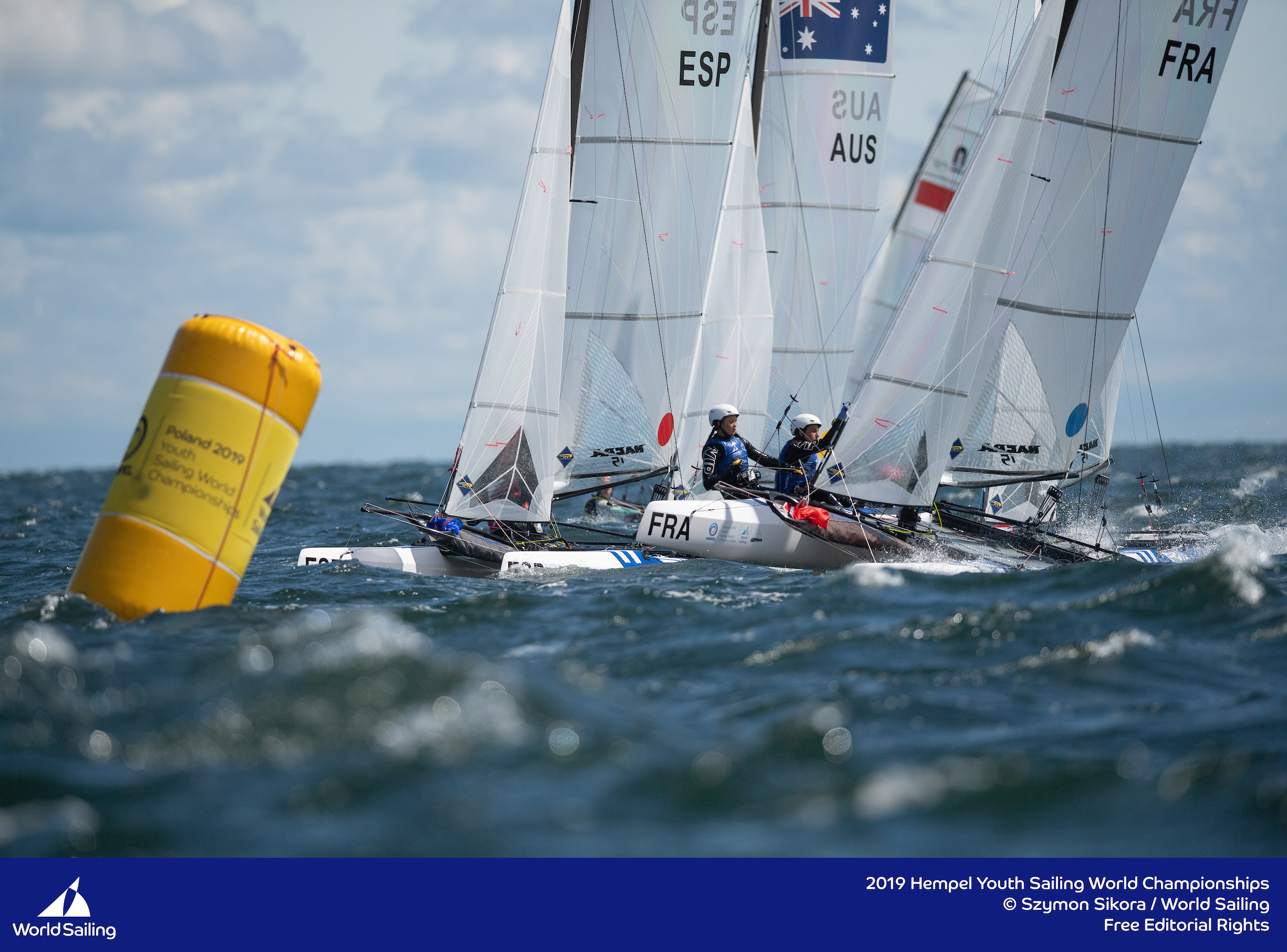 Australian Sailing’s Will Cooley and Rebecca Hancock have won Gold in the Mixed Nacra 15 at the 2019 Hempel Youth Sailing World Championships in Gdynia, Poland with one day to spare.

The Nacra 15 lead changed on a daily basis, but it was the Australians who ultimately prevailed. The Sydney pair finished the penultimate day with an unassailable nine-point lead after posting a second, eighth and fifth place.

“It’s unreal; it doesn’t feel real at all. We’ve both worked so hard and it definitely paid off,” an emotional Bec Hancock said after racing.

“All the effort we’ve put it; to see it come out the other end is just the best feeling,” Will Cooley agreed.

Across the week Cooley and Hancock have not won one race, but their consistency is unrivalled, and they have not finished outside of the top eight once. With one race remaining, they have clinched Gold as they hold enough of a points buffer over the French team to confirm the title.

“Being consistent and working together as best as we can, that’s what this came from. There wasn’t any secret to it,” 2018 Youth Olympian Cooley said.

“We played it low risk and raced smart, not racing to win any races but to win the regatta. We wanted to be consistent and try our best,” Hancock added.

“We want to say a big thanks to Australian Sailing and to our parents; and just to everyone supporting us,” Cooley said.

Hancock also added a thank you to their coaches. They are coached by Matt Jerwood at the Youth World’s.

In a message to all up and coming youth sailors, Cooley added, “Just keep at it. It might not feel like you are doing the best, wherever you are. But it will always pan out well, as long as you put in the effort and the hard work. So keep it going, keep the drive and motivation.”

All Cooley and Hancock have to do on Friday in the final race is to stay out of trouble and avoid a non-discardable disqualification or penalty to confirm their win.

Gold medals were also already decided in the 420 fleets with New Zealand winning the Boy’s 420 and USA the Girl’s division with just one race remaining. Australia is out of medal contention in both events. Both teams dropped two spots into 12th and 14th respectively after two races on the penultimate day.

Ryan Littlechild and Jack Ferguson dropped to 12th after posting 12th and 24th results, while Lily and Matilda Richardson posted 18th and 23rd, dropping them to 14th.

The points are close heading into the final day for the remaining six events with plenty up and downs shaking up the leaderboards.

The race for Gold will go down to the wire in the Boy’s Laser Radial fleet on Friday with Zac Littlewood leading going into the final day.

Also still in medal contention are Australia’s 29er Boy’s, with Archie Cropley and Max Paul going into the final day ranked third. The two posted seventh and 13th places and are five points behind Finland in second place. Leader, Norway, is ahead by 33 points.

In the 29er Girl’s, three races were sailed on Thursday with a 19-26 RET-12 scorecard for Tasmanians Alice Buchanan/Dervla Duggan, who dropped from ninth into 13th place. Two races will follow on Friday.

In other Australian results, Maddie O’Shea had a challenging day, posting a 42nd and 41st in the Laser Radial Girl’s to sit in 25th.

In the RS:X Boy’s, Hamish Swain finished the penultimate day in 22nd. In the RS:X Girl’s, Amelia Quinlan was back on the board after she had to retire following a collision and a damaged board the day before. She posted a 17th and 20th to be in 19th overall.

Racing is scheduled to commence at the earlier time of 10:40 on Friday 19 July as the 2019 Youth Sailing World Championships concludes.