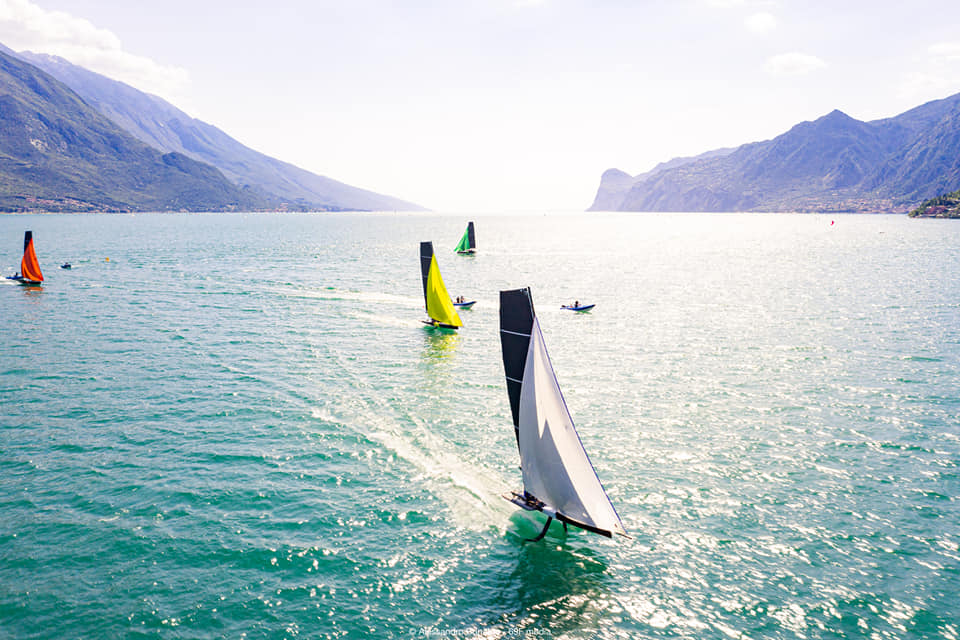 Limone Del Garda: Sailors are in the ring at the Youth Foiling Gold Cup; fighting to remain in the competition.

After the qualifying round, the scores reset to zero and the pressure ratcheted up because, at the end of every three races, the lowest-ranked team gets thanked for their participation and then sent home. Thus far, Fraglia Vela Riva has put on a flawless performance, winning all five knockout races, and will now fly into the third knockout round before the finals.

After completing the first knockout round, the writing was on the wall for the Americans. The only non-European team in this event, Sail America had a great time, learned a lot and were resolute to the end. Mainsail trimmer Otto DeMuth had nothing but praise for the boat and the YFGC circuit, “Coming into this, we were intimidated. We had never been on the boat and didn’t really know what we were getting ourselves into. But, the team dynamic we had was amazing. I think we worked super well together, and I think it has been the best two weeks of my life.”

Further down the rankings, Otto’s compatriot Cam Farrah, helmswoman on team Magenta, is piloting her newly resurgent team through the knockouts and learning from every opportunity.

Farrah “Today, we’ve made great strides on communication, which is a big deal for us. Everyone’s from different countries; we’d never met each other before this regatta. There’s some pressure, but we’re here to learn and have fun, so we will stay calm out on the racecourse and try our best. It’s just a boat race at the end of the day!”