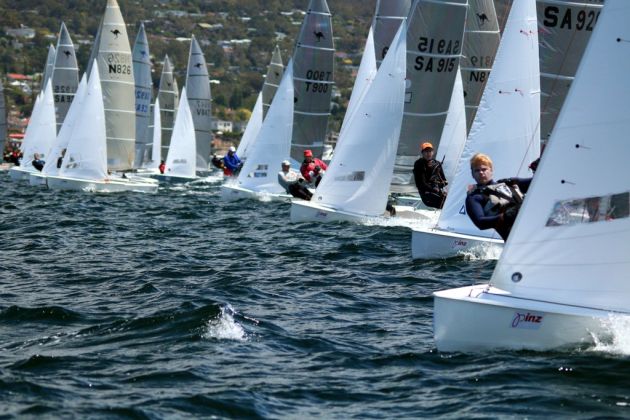 Start of the first race of the Sharpie nationals. Photo Angus Calvert.

Bailey, a newcomer to the class, sailed Gentlemen’s Relish to victory in the opening race in the 73rd Sharpie nationals on the River Derwent, representing the host club, Sandy Bay Sailing Club. The young Tasmanian picked a 60 degree windshift late in the 15 nautical race to come from 10th in the 35 boat fleet to score a 46 second win from two veterans of the high performance, mainly adult three-crew centreboard class.

Second place went class veteran Derek Milligan from the ACT, sailing Zulu and an entrant in the Over 50 class of the regatta. A close third was wellknown South Australian Sharpie sailor Tony Turton (nominated in the Over 40 class) sailing Don’t Poke the Bear.

Bailey is sailing Gentlemen’s Relish with Doug Shephard and Chris Jones as crew.

The last Tasmanian to win the Australian championship in Sharpies, Dew Latham and his crew of Nick Johnston and Nick Carter finished a close fourth with One Hump or Two.

This is the 73rd National Championship for the Sharpies but it may be the last due to the cost of shipping across Bass Strait as there is no State Government subsidy for vehicles towing ‘sporting equipment’ such as boats on trailers.

Of the 35 entries, 24 have come from interstate but the number would have been greater but for the cost.

While the local fleet has diminished over the years, the high-performance Sharpie has attracted some of Hobart’s talented young sailors as helmsmen and part of the three-person crew.

Heading the Tasmanian contingent is veteran skipper Drew Lathan at the helm of One Hump or Two, the last Tasmanian to win an Australian championship in the Sharpie class.

Two races are scheduled to be sailed tomorrow, 4 January.