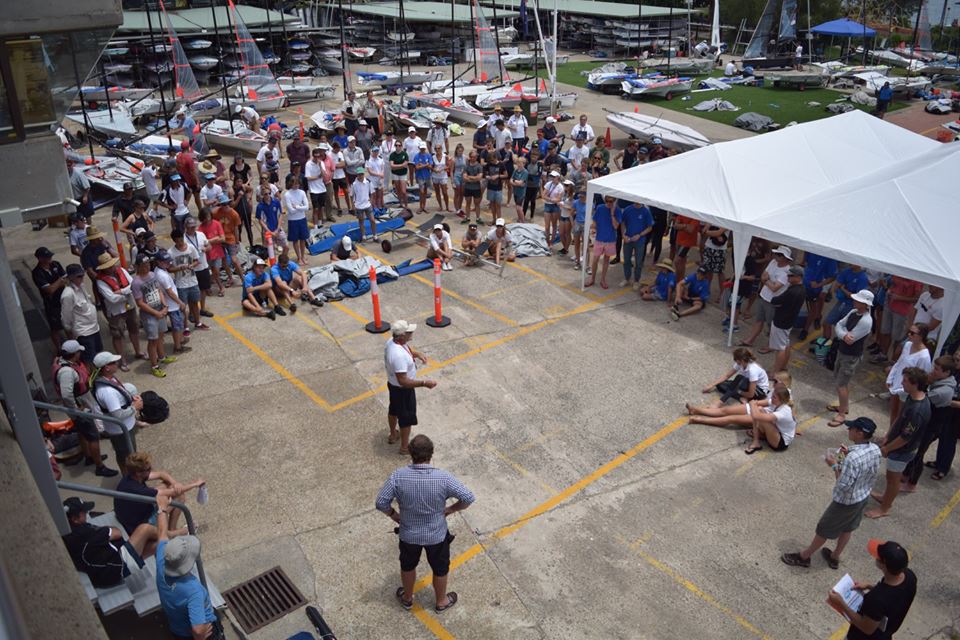 Over 220 sailors are competing in four nationals championships at the Splash Festival. Photo Alex South.

The 2016 SPLASH Festival, encompassing the 2016 Australian 420, Zhik Australian 9er, Australian I14 and the Australian Youth Championships began today on a gloomy Sydney Harbour. Over 220 Sailors hit the water for their last hit out and preparations ahead of the official racing tomorrow.

Of the 110 registered boats, there were only a handful that did not take advantage of the invitation race. Those who elected to race were met with tricky conditions as light east south-east winds and choppy waters were the served up. The resounding frustration for he light conditions saw sailors return to the club earlier than expected, at least that's what they claim.

There's an age-old rumour in the sailing community that suggests completing the invitation race is bad luck. Local 29er sailor John Cooley agrees after he and his crew Simon Hoffman originally announced 'ramp congestion' as the reason for their early departure from the racecourse.

Harry Price, another Sydney local, admitted he and his 49er team mate, Harry Morton chose not to finish because of the bad luck associated with winning off the bat. Even though they were having a tight race with on water rivals, David Gilmour and Lewis Brake, they withdrew from the race before the finish. Although they didn’t know the reasons behind the rumour, they didn’t want to test out its potential truth.

Across in the 420s, the answer was unsurprisingly familiar, with Sophie McIntosh and Emily Summered admitting they were happy to test their boat speed, 'it was pretty shifty and wavy… it was really close racing'. But did they finish? McIntosh laughed, 'no, it's bad luck – we pulled out early.'

Interestingly most of the Invitation Race winners are in contention for their respective overall titles this week. Taking out the International 14's invitation race were the current National Champions, Brad Devine and Ian Furlong who seemed to thrive in the choppy conditions.

On the same course area Sam Gilmour and crew, Cameron Seagreen, won the 49er race while Simon Murnaghan and George Richardson took the 29er crown. Other non-believers included 49erFX winners, Tess Lloyd and Caitlin Elks, who were one of only two 49erFX crews that crossed the finish line. Over on the ‘Delta’ course in the Sound, Alexander Higgins and Joal Mackenzie took out the 420 race, in choppy, frustrating conditions.

For those that braved the shifty conditions and completed the course, their efforts will be rewarded at the SPLASH presentation on the 8th of January, but will their regatta efforts be jaded? We'll have to wait and see.

Racing at the SPLASH Festival begins tomorrow at 1100 for the I14s, 1230 for the 9er classes and 1300 for the 420s. Multiple vantage points are available across the harbour, with the skiff classes using the main body of the harbour, whilst the 420 'Delta' course will be in the Sound.

As apart of it’s Summer of Sail, Woollahra Sailing Club is hosting the SPLASH Festival 2016, which includes the Australian 420, I14, 9er and Youth Championships. For more information on Sail Sydney & the SPLASH Festival please visit the WSC website: www.woollahrasailingclub.org.au/regattas.