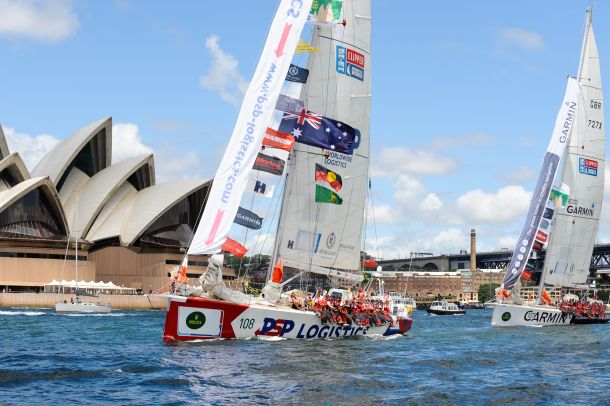 Clipper boats at the Parade of Sail. Photo Clipper Ventures.

Eight young South Africans, some of which have never seen the ocean before, have been selected to compete in the world’s longest ocean challenge; at 40,000 nautical miles the Clipper Round the World Yacht Race is unique and will be a life changing experience.

The Sapinda Rainbow Foundation is sponsoring the places to develop young people as future community leaders and role models. They will be supported by mentors beyond their Clipper Race experience to help them pursue their career goals.

Thirty young people from across the country aged 18-23, who were shortlisted from nearly 200 applicants, have just completed a tough selection process over the last three days hosted by Sail Africa in Durban.

“We were looking for candidates who would benefit the most from the experience in terms of their personal development and the impact they could make on their communities,” explained Clipper Race Crew Recruitment and Development Director David Cusworth, who participated in the Durban selection panel.

“The candidates who participated in 2013-14 are a shining example of what can be achieved and the life-changing nature of participating in such a tough event which invariably teaches crew how to take on new challenges outside their comfort zone,” added Mr Cusworth.

All candidates were put through their paces during the selection weekend in a series of tasks which included sailing familiarisation and aptitude testing; media, communication and presentation skills; plus one-to-one interviews.

The opportunity is fully funded by the Sapinda Rainbow Foundation. Its chairman, Dirk Van Daele, participated in the 2009-10 edition of the Clipper Race when he saw a similar project make a profound difference for young people from deprived inner city areas in Europe. He launched the first initiative in 2013 and created the Foundation last year to provide longer term support and development opportunities for selected the selected candidates from challenging backgrounds in South Africa. The aim is for participants in the project to take their new skills back into their communities and to inspire others.

He stated: “This is the second group of young people we will be supporting and hope to build on the success of our first project in the last race. This is not only about participation in a team sport like sailing, but also broadening these young people’s horizons, growing their confidence and leadership skills, exposing them to the world and helping them translate this into their successful personal development. Ultimately I hope they will enrich their local communities and act as positive role models for other young people.”

The Clipper Race has long been recognised as a powerful personal development challenge which provides learning and leadership experiences in a very challenging environment. It is uniquely aimed at amateur crew and sailing novices from all walks of life. It’s divided into eight legs comprising a series of global races. It is the only race in the world where the organisers supply a fleet of twelve identical racing yachts, each with a fully qualified skipper to safely guide the crew.

The Clipper Race was created by its chairman, the UK yachting legend Sir Robin Knox-Johnston, who became the first person to sail solo, non-stop, around the world in 1968-69. He has been involve in many youth development projects through sailing and sits on the Sapinda Rainbow Foundation Advisory Board; he is also personally mentoring some of the young people participating in the initiative.

The eight crew and two reserves will be flown to the UK in May to complete an intensive four-week training package. They will then return to South Africa and be flown back out to different ports around the world to re-join their teams for their allocated races.

The successful candidates will each complete a single leg of the race and be allocated to a team which includes people of all ages, backgrounds and nationalities. They will learn to work, live and compete together in challenging yet highly rewarding situations, as well as having the opportunity to travel to exciting destinations as they race across the world’s oceans.

The tenth edition of the Clipper Race starts in the UK on Sunday 30 August 2015 and will visit Cape Town in late October 2015.