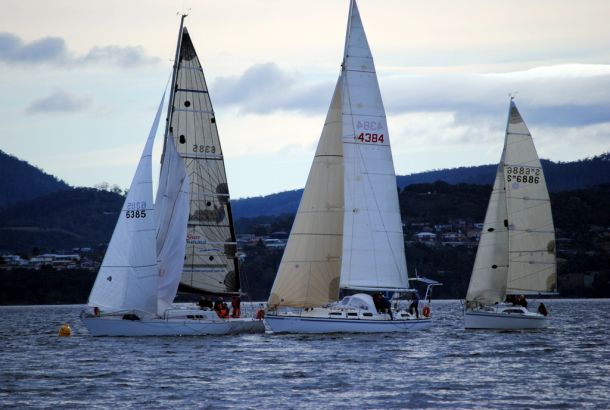 Hobart yachtsman Steve Chau today celebrated his recent election as Commodore of the Derwent Sailing Squadron with a narrow, but significant win with his Young 88, Young Lion, in Division 2 of the Royal Yacht Club of Tasmania/The Good Guys Winter Series on the River Derwent.

Commodore Chau owns Young Lion in partnership with another prominent DSS member, Scott Brain, but because of other commitments – Chau with club official duties and Brain skippering his other yacht, the SB20 Brainwave – they have not entered Young Lion for their own club’s Winter Series.

Young Lion won today’s race by just three seconds on corrected time to give Chau and Brain a handy pointscore lead with one RYCT race scheduled for the first Sunday in September.

Young Lion has now scored two wins and a third, with one day’s racing cancelled because of galeforce winds, to be on 5 points, six points clear of Chau’s previous boat, the Sydney 38 Ciao Baby II, now owned by Gary Cripps which has 11 points on the board. In third place overall is Winstead Wines (Neil Snare) on 15 points.

Fortunately, the race finished before the breeze backed sharply to the NW with a cold front gusting to 30 knots scattering the Off-the-Beach Laser 4.7 fleet racing in Sandy Bay.