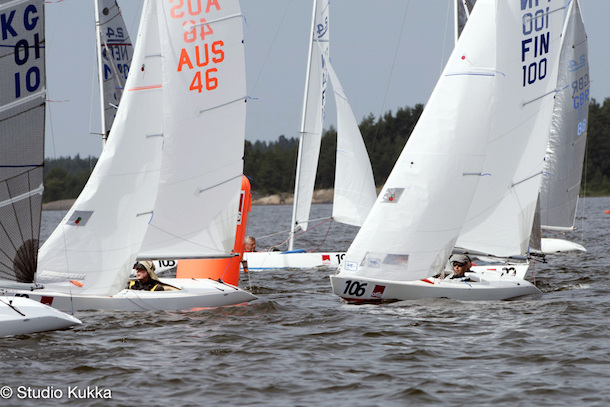 Stephen ‘Rowdy’ McCullum, the Royal Yacht Club of Tasmania’s member contesting the International 2.4mR open world championship being sailed in Finland, is having a share of his ups-and-downs in the 109 boat fleet.

He began the regatta with an OCS followed by promising placings of 25th and 11th, but crashed on day two with a 55-50-44 score.

On day three, overnight, he began with an BFD,  bounced back with a 10th and then crashed again to finish 69th.

After nine of the scheduled 12 races, McCullum, a relative newcomer to the single-handed keelboat class, is 49th overall.

Nevertheless, his good results at times indicate he will be one of Tasmania’s strong contenders, along with Matt Bugg, when the RYCT hosts the 2016 open world championships for the 2.4mR class next January.  Not only will he be sailing on his home waters but will also have a new boat.

European sailors dominate the big fleet and the top positions overall, with Sweden’s Stellan Berlin at the top of the leader board having had three wins in nine races.