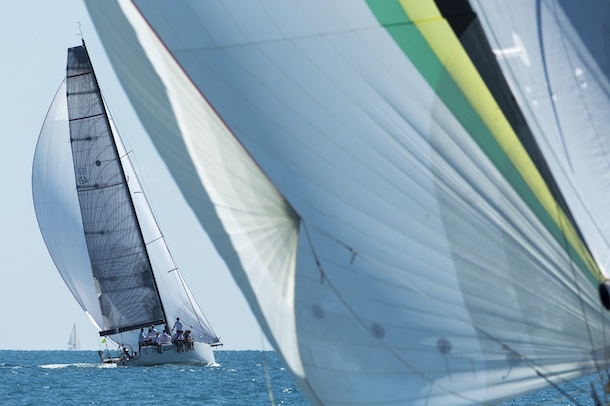 The Goat and Hartbreaker in IRC Division 1. Photo Andrea Francolini

IRC Racing 1, IRC Passage and Cruising Division 1 sailed a 24 nautical mile course around the Bay, while the remaining seven divisions sailed 16 miles. Conditions did get testing, especially at the wing mark where gybing under spinnaker was not for the faint hearted.

Event Chairman, Jim Hayes, said: “The racing was fantastic. We were blessed with very good weather. There was one light day and one of strongish wind that gave competitors a chance to flex their muscles. The rest was champagne sailing.

“The whole race organisation and those working on the water worked so well together so the sailors could have the best regatta. We have a great team here.”

Matt Allen sailed his recently purchased TP52, Ichi Ban, to the overall win in IRC Racing Division 1. Allen skippered the yacht for the first time at Airlie Beach and the boat got better as the week wore on.

Ichi Ban won four out of six races, but did not race the final day. With the same handicap as OneSails Racing, Ray Roberts’ Farr 55, Ichi Ban had some great boat-on boat competition and defeated his rival, by two points. OneSails won the opening and closing races.

“The boat is going much better in light air than we expected. We were so pleased to see Ray (OneSails) entered, they were our benchmark. They’ve been together a while, so their crew work is very good. If Ray hadn’t been here, we wouldn’t be where we are. They made it an excellent regatta for us,” Allen said.

Allen, the president of Yachting Australia, also praised the volunteers. “Where would we be without volunteers? They are the backbone of our sport.”

Gordon Ketelbey’s Farr 40 finished third overall ahead of the Farr 40 Worlds in Sydney early next year.

Bob Steel selected Airlie Beach Race Week to launch his new Mat 1180, Quest, which did not race today and finished fourth overall. Crew member Mike Green said they missed the race “because we have some tinkering to do to finish the boat off.

“This week has been good for us, to get to know the boat and put in some sailing time on it. We’re getting there and I think it will be very competitive,” ended Green, a long term crew and friend of Steel’s.

Jason Close sailed his Archambault 31, More Noise, to first overall in Division 2. The Victorian yachtsman was surprised to do so well against the likes of champions Wild Rose (Roger Hickman) and The Philosopher’s Club (Peter Sorensen).

Close bought More Noise to Airlie Beach Race Week from Sandringham Yacht Club. “I haven’t raced the boat outside Melbourne, so I didn’t know how we would go against boats like Wild Rose and The Philosopher’s Club. It couldn’t have gone better,” he said.

More Noise beat today’s race winner, Wild Rose, by just over five points after being awarded 2.4 in a redress situation. Sorensen’s boat was a further four points behind. The latter two boats went head-to-head all week.

Tony Horkings from Southport Yacht Club skated home to win IRC Passage by one point with his Northshore 38, Lee-Way. Skippered to three wins (including today) from six races, by 20 year-old Sophie Lahey, Horkings was proud of the four younger crew on his yacht, mixing it with the older members.

By far the largest entry, the cruising boats were split into three divisions. They also make the prettiest picture with their colourful spinnakers. There is no better sight than seeing a mass of colour with the backdrop of the Whitsunday Islands with whales breaching and dolphins playing thrown in – all for nothing.

Cruising Division 1 went to Paul Bunn and his Beneteau First 44.7, Christine. Bunn, from Victoria, proved the theory that you don’t need to win a race to win the series, you just need to be consistent.

“What a brilliant regatta,” said Bunn. “We’re the only boat here from St Kilda, so we are proud to win. I only bought the boat 18 months ago and this is our first regatta out of Victoria.

“I’ve never been to a northern regatta, and I’ll definitely be back to this one. We sailed 1600 nautical miles from Melbourne to be here. It feels like we’ve been away for a month.”

Bunn said he found Race Week “A real challenge. From the light day where you had to give your full attention to the racing, to yesterday’s bumpy day, to the shifty conditions today. It was brilliant,” he said.

Christine’s crew included locals from Melbourne and a couple from Tasmania. “To come and race in the warm weather with the great and scenery is fantastic.

I thank my crew – they were cool, calm and collected – it was a real team effort.”

Bunn said they particularly enjoyed today’s conditions. “It started out at around 8 knots, but built to 18. The wing mark was a bit hairy for a few when we came to gybe. We just missed Helsal’s stern,” he said laughing.

“The best part was the run; it was fantastic getting the kite up and romping downwind,” he said.

“I couldn’t believe it; it was a bit of a surprise. I didn’t realise until I saw the results and that put a smile on our faces,” Hudson said.

“The crew worked hard, it was a great team effort. I had two guys join the crew from Melbourne, and the rest of us are from Bowen. We had great competition with Le Rossignol too,” said Hudson who competed at Airlie Beach last year too.

Cruising Non-Spinnaker winner was Dewi Hughes with his Anthea from WSC. Hot on his heels was Victorian Geoff Adams’ True Colours, just one point behind. John Galloway’s Queensland Marine Services, also from WSC, was third.

Graham Sherring stayed true to his word, and kept Stay Tuned up in a podium place, finishing second overall, three points adrift of Vivace and with three wins in the bag. The mostly Queensland fleet was bolstered by Rees Howell’s Octopussy, which came all the way from Perth to contest Race Week.

Peter Wilcox held on by the skin of his teeth to claim the Multihull Racing series with Mojo. The Schionninggforce1500 from the Multihull Yacht Club Queensland, defeated Tony Considine’s Grainger 10, APC Mad Max, skippered by George Owen by one point and Andrew Stranksy’s Seven Seas 50, Fantasia by a further point in this close series.

Hats off to those boats that travel great distance by road from Adelaide to compete each year: Carbon Credit (Peter Hawker); Crosshair (Gerald Valk) and Dux Nutts (Peter Boyd) and to all those who also travel the distance to make the competition so good this year.

“This is the best competition you will see in the multis, so it was really satisfying to win,” Peter Wilcox said.

“After all the work and preparation Craig Humphries at Signature Yacht Services and Ben Kelly at Quantum put in. The boat’s been out of the water for a refit since we got back from Asia, and all is working well.

“I couldn’t have done this without my crew. There are no egos on the boat; it’s a real team effort. I’d especially like to thank Steve Lord who’s been with me from day 1 and been instrumental in keeping the boat running. He’s totally dedicated,” Wilcox added.

To Bob Critchley and his Cool Change crew, we hope to see you back on the water soon after the unfortunate capsize of Thursday.

Full results and all information on Airlie Beach Race Week at: http://www.abrw.com.au/