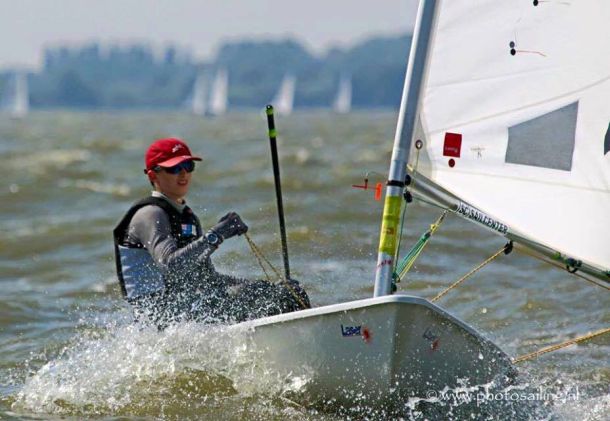 Both sail out of Perth’s Royal Freshwater Bay Yacht Club and Fremantle Sailing Club and both teenagers began their sailing on the Swan River as eight-year-olds.

For 17-year-old Thomson, the current Australian open and youth female champion in the Laser 4.7s, this was her third win at the World championship this week, her overnight score being 1-3-26 in the girl’s Gold fleet for a net total of 56 points after two discards. Ahead of her are sailors from the Ukraine, Germany, Belgium, Italy and Slovakia in the European-dominated fleet.

Littlewood, 15, has steadily improved through the regatta, overnight enjoying the fresher winds off Medemblik with an excellent day’s results of 6-1-2 in the boy’s Gold fleet to be ninth overall on 73 points. In the under 16 boy’s grouping, he is second overall but the Italian leader looks unbeatable.

Again, European sailors are dominating the overall results with just two points between Spain’s A.Bethencourt Fuentes and Italy’s Guido Gallinaru at the top of the leaderboard.

Tasmanian Sam King had better results in the fresher breezes, with a 3-38-23 result that has lifted him to 37th place in the 65-boat Gold fleet and 10th in the under 16s.

Another WA sailor, Caelin Winchcombe, continued to slide down the leader board and is 23rd overall, overnight finishing 4-28-52 (his second discard).

In the Silver fleet Ethan McAullay is 20th overall while Tasmanian Josh Ragg moved up to second in the Emerald fleet with his best day of the regatta, placing 3-6-19.