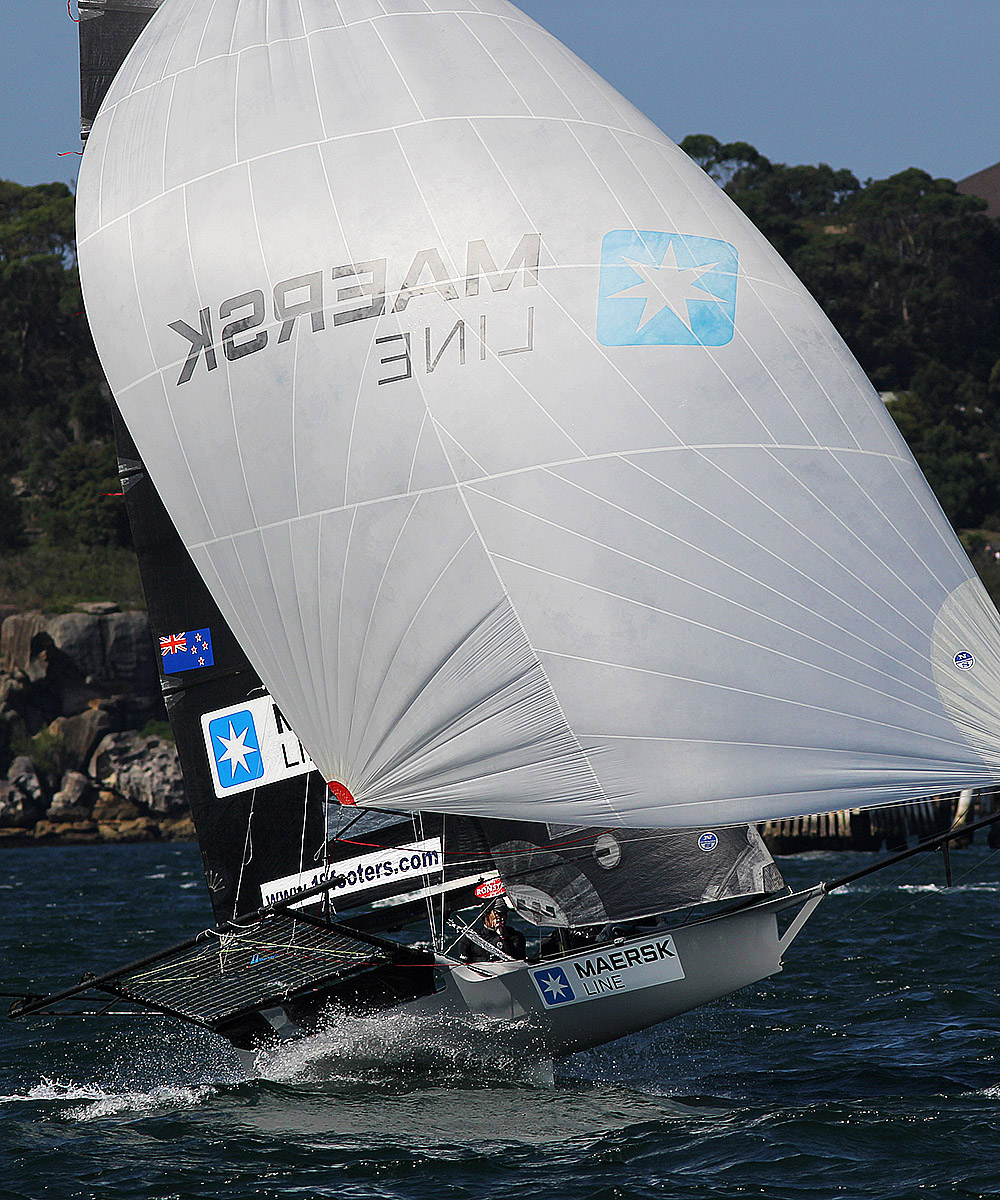 Maersk Line grabbed the lead on the first spinnaker run, after The Kitchen Maker capsized at the wing mark, and was never headed over the next two laps of the course, going on to win today’s race, sponsored by Quality Marine Clothing by 16s.

Australia's Finport Trade Finance (Keagan York, Matt Stenta, Angus Williams) trailed Maersk Line for the entire two laps and finished strongly on the final two spinnaker runs but the young team were strong under the pressure and held on for the victory.

The race, which was sailed in a 15-18-knot north east wind, produced spectacular downwind rides for the crews but it also produced disappointment for some of the leading contenders for the title.

The Kitchen Maker (Scott Babbage, Aust) sailed a brilliant course up the first windward leg to the Beashel Buoy mark and led narrowly from Vintec (Kirk Mitchell, Aust) and Maersk Line, while Finport and Knight Frank (Riley Dean, NZ) headed the rest of the fleet.

Conditions were tricky as the leaders headed to the wing mark off Shark Island and took a toll on both The Kitchen Maker and Vintec.

Series favourites Smeg (Lee Knapton, Aust) and Honda Marine were both well back in the pack.

Maersk Line dominated on the next windward leg back to the Beashel Buoy and held a good lead over Finport and Harken, which had settled into a good battle for second place. These three teams had opened up s break over the rest of the fleet, although both Smeg and Honda Marine were making progess through the fleet.

Smeg's day came to a spectacular end when the skiff appeared to hit the wake of a power vessel and the skiff nose-dived. The Australian champions recovered but came home a distant 15th and will now have to make sure there are no more potential discard results over the rest of the regatta.

Honda Marine's recovery was much more successful as the New Zealanders came home in fourth place, a mere 1s ahead of Asko Appliances.

It's been an unfortunate start for the European teams, who were forced to use borrowed boats when their skiffs were impounded, temporarily we hope, on arrival in Sydney.

Conditions are expected to be much different tomorrow as a Southerly wind is predicted before the start of Race 2.

Race 2 of the JJ Giltinan Championship will be sailed on Sydney Harbour tomorrow, Sunday 4 March