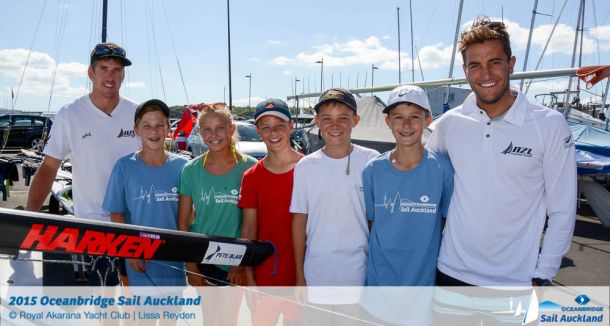 With the postponement flag raised again, the Oceanbridge Sail Auckland fleet have again been kept ashore as the race committee wait for an opportunity to commence. The sailors are on shore, including 49er World Champions Peter Burling and Blair Tuke who train from Royal Akarana Yacht Club when based in Auckland.

RAYC Optimist sailors are part of the 80 strong volunteer team and today were given the opportunity to meet their sailing heroes. Elijah Liefting, RAYC Junior Sailor of the Year for the 2014/2015 Season was in awe of being close to his idols.

“Oh my goodness I just met the best sailors in the world!” gushed Leifting, who was extremely excited to meet Burling and Tuke.

Rose Dickson who recently competed in Junior Sailor Auckland finishing first girl in the Green Fleet division was super enthusiastic to meet Blair Tuke. “He is awesome!” she said.

Burling and Tuke are getting used to being heroes to young sailors, and took the attention in their stride.

“It’s a bit of an honour to be able to give these kids some inspiration to keep sailing,” said Tuke.

“It was really cool to catch up with these young Akarana sailors who are the future of our sport,” said Burling.

“Time on the water is important,” said Tuke and “Keep having fun,” was the advice that Burling gave to the sailors.

Royal Akarana Yacht Club is the home base for Burling and Tuke, as well as Alex Maloney and Molly Meech (49erFX) and Marcus Hansen and Josh Porebski (49er).

Oceanbrige Sail Auckland is now into Day 3, however light conditions have plagued the event so far. Sailors are eager to race, and the committee boats are on the courses hoping for the breeze to fill.

The Volvo Ocean Race fleet are also due to arrive late today and the fleet will receive a true Kiwi welcome into the City of Sails with 200 boats on the water racing in Oceanbridge Sail Auckland.