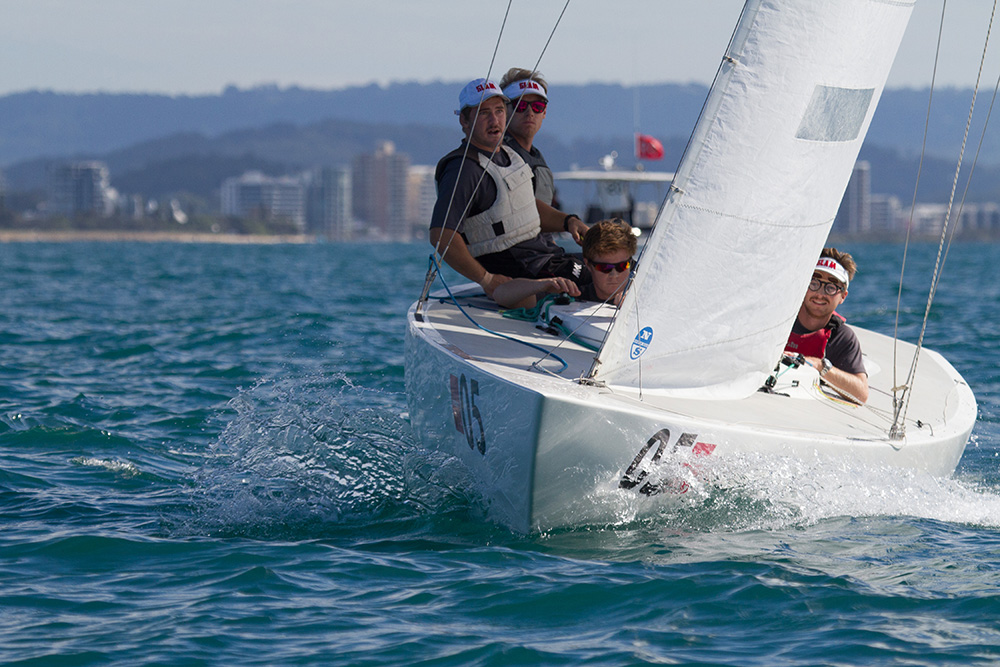 A team of young guns have put the Evans Long 20th Etchells Australasian Championship fleet on notice as they slipped into first overall at the end of day two of the three-day regatta organised by Mooloolaba Yacht Club.

The Brisbane-based Fair Dinkum team skippered by Grant Hudson, 33, and crewed by Matt Parrott, 22, Klaus Lorenz, 21, and Noosa’s Ben Vercoe, 20, have moved into first place after tidy results of sixth and then first in the very shifty east, south-east breeze which gently touched the open waters off Mooloolaba today.

They are quite surprised they have slipped ahead of an illustrious list of one-design skippers and crews.

The team have spent little time on the water since the nationals and are stuck with using a heavy air jib this weekend.

Their main goal was to remain consistent; to stay in the top five or six places in every race.

The start of the regatta didn’t quite start the way they intended. After a second, a twentieth and then a fifth, the team went back to their digs last night and had a long chat.

“We haven’t sailed the boat since the nationals so yesterday we were exceptionally rusty. We spent the day just getting our head around getting the boat to sail fast again.

“And the boat’s been in the shed getting a new nose on it after it got taken out.

“Finally today we got into the groove and everything started to work after a long crew chat on Friday night. Everything seems to have clicked,” Hudson added.

“Both races, we didn’t go the right way. We found ourselves in very deep positions, but we sort of fought back,” Chew.  “It’s going to be very close tomorrow.”

The Sydney Top 40 team of Peter Merrington, Geoff Bonouvrie and Ian McKillop left behind the disappointment of a 16th in race one of the series to prove consistency and staying clear of the pack in the light airs pays as they added a third and sixth to place to their fourth and sixth of yesterday to place second overall.

“We are still in the game,” a surprised Merrington said when he saw his team’s place. “A lot of the young guys are sailing well.”

Merrington admitted it was hard going today.  “There were a lot of shifts; a lot of stuff going on.

“We spend a lot of day on the left and it seemed to work for us, but other guys did quite well coming out of the right. It was pretty fluky and there was real phasing in the breeze. The guys were winning out of both sides.”

“Today there was a lot of getting a good start and finding a nice, clear lane,” Merrington added.

Melbourne’s Chris Hampton and his Tango team of Ian Walker and Sam Haines used the first race general recall to gain a better pin-end position, a clean left-side lane and good speed in the flat conditions to achieve a commanding first place.

“Before the start we decided we would go left. We didn’t win the start at the pin end, but it cleared out and we held in. We kept punching left. On the run we lifted, stayed on starboard and just played that side all day,” Hampton said.

With the pin end packed, Tango chose mid-line for the start of the second race, which started with a general recall before going off under the U flag.

“We didn’t get a clear start. Grant Hudson was below us and we didn’t hang in as well as we wanted to, but we were quite happy playing the middle of the track and keep in the best pressure,” Hampton added. That decision delivered them a third over the line and moved them into third in the overall pointscore.

There are still two races scheduled for tomorrow starting at 10am. The forecast is for a fairly solid breeze offshore and a 20 knot southeaster inshore.

The two-time Australasian champions Gen XY are sure they still have plenty to play for tomorrow. “We are super keen. It’s going to be windy. Bring it on,” Chew declared.

“We will love it,” Hudson said. “We can’t wait for tomorrow and to get into it. The boys love the breeze.

“We are young, strong and hungry.”