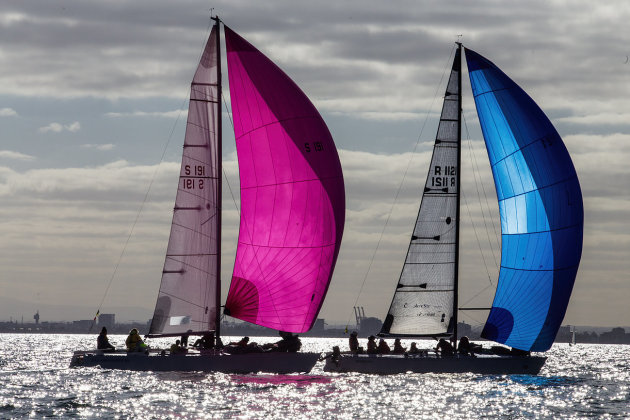 Day two of the Australian Women’s Keelboat Regatta kicked off very slowly with a postponement to all racing due to lack of wind. Hope was beginning to fade as the breeze would tease race management into thinking there was enough to start a race, only for it to disappear minutes later.

This lull in racing was not put to waste with the majority of the fleet taking the opportunity to socialise with one another. Some crews brought out the Doritos and Salsa while others donned crocodile hats. This delay in racing was the perfect chance to catch up with some of the interstate guests.

‘Outlaw’, the crocodile hat wearing team from the Northern Territory, are great advocates for the regatta as they intend to learn what they can and bring it back to their home town of Darwin. Jenny Simondson explains:

“We’re all from the Northern Territory and intend to use the skills learnt from sailing in this regatta towards starting some one- design racing at the Darwin Sailing Club. We hope this will engage our trainees into continuing on to competitive sailing after their learn to sail courses, just like our newest crew member, Rebecca, who did a learn to sail course last year and loved it so much has joined our crew and travelled with us here. We love this regatta as everyone is welcoming to people of all experience levels.”

As the day got warmer, the clouds burnt off and the breeze finally kicked in with a solid 10 – 12 knots from a N/NW direction. This allowed race management to pull the postponement flag down and get into the action.

The Division 1 boats must have been very eager to race as the congestion on the start line was intense with some boats almost re- defining the racing rules of sailing in spectacular fashion. On the other hand, the South Australian team on the boat ‘Mrs Overnewton’ had a great start; they had a clear lane, were on the favoured tack and seemed to effortlessly hit the line on time.

It was clear plenty of ground could be made on the upwind legs today; those who decided to ‘bang the corners’ put all their eggs in one basket and fell short. Others who ‘played on the err of caution’ and engaged the shifts in the middle seemed to hold strong.

Scarlett Runner led a solid first beat by staying in phase and tapping into the pocket of breeze in the top third of the course. They led the fleet around the top mark, made a stellar kite and initiated the fleet into the final gybe to the bottom mark. Salamander III’s kite set was average but they managed to sail a very effective downwind that put them back into the action by the bottom mark.

Not far in front was Tasmanian team, ‘Absolut’, who’s boat set up really gave them a ‘leg up’ on the upwinds. Being so proactive, they took the opportunity to gybe at the top mark on their second lap only to be stopped mid- manoeuvre by oncoming traffic in the other direction. This allowed local Victorians on ‘More Noise’ to make a slight step up and overtake ‘Absolut’. Following a smart third lap, the team on ‘More Noise’ made line honours securing them a win in IRC and AMS in both races for the day.

Division 2 boats saw a split in the fleet early on with half trialling the left and the other half, the right hand side of the course. Victorian boat, ‘Vice Versa’ went left, hooked into a good pressure line that took them up to the top mark, rounding it first. ‘Vice Versa’ blitzed the downwind and sailed consistently well for the remainder of the race, securing a 2nd in EHC by 5 seconds to Lucy Towonson’s ‘ThunderDownunder’.

‘Vice Versa’ polished Division 2 off in the second race by port- tacking the whole fleet off the start. Following this they led an easy win by utilising the crew skills and reducing the amount of risk. Skipper, Aurora Paterson, explained:

“My team is great- they are so good at their job and can count on them to get the work done. We didn’t play every shift but we made sure we that we sailed fast and covered the fleet when we could. We were happy with our boat handling skills, so much so that we even caught up to the Div 1 boats!”

The S80 fleet took full opportunity of the welcoming conditions by really pushing each other over the two races. The benefit to One Design racing is that no further calculations are required once you finish the race. All boats finished within a couple minutes of each other with Britta Baade’s ‘UpnGo’ just squeezing in front of Sabina Rosser’s ‘Mood Indigo’ to continue their lead from yesterday. The pressure will be Rosser tomorrow to see if she can slip in a win.

Off the water, everyone is raving about the boat buoys and the free BBQ and beers after racing. Stephanie Strong, skipper of ‘More Noise’, and her crew believe it all helps with the perception and attraction of the event:

“The boat buoys are a great addition to the regatta. We love having the support of willing and able guys to help us around the dock. It just adds that extra bit of comfort, especially since nearly all the competitors are borrowing boats! The BBQ is such a simple idea but it brings everyone back to the club- which is great because you get to hear all the stories of the day’s racing! We are having such a blast at this regatta.”

Tomorrow is the final day of racing for competitors in the 2016 Australian Women’s Keelboat Regatta. The daily briefing will be held at 0800 in the Harbour Room of the Royal Melbourne Yacht Squadron with racing to commence at 0955. Two races are scheduled and no racing is to begin after 1500. If you are interested in coming to watch the final day on a spectator boat, join us at the competitors briefing at 0800 where you will be allocated a spot for the day.