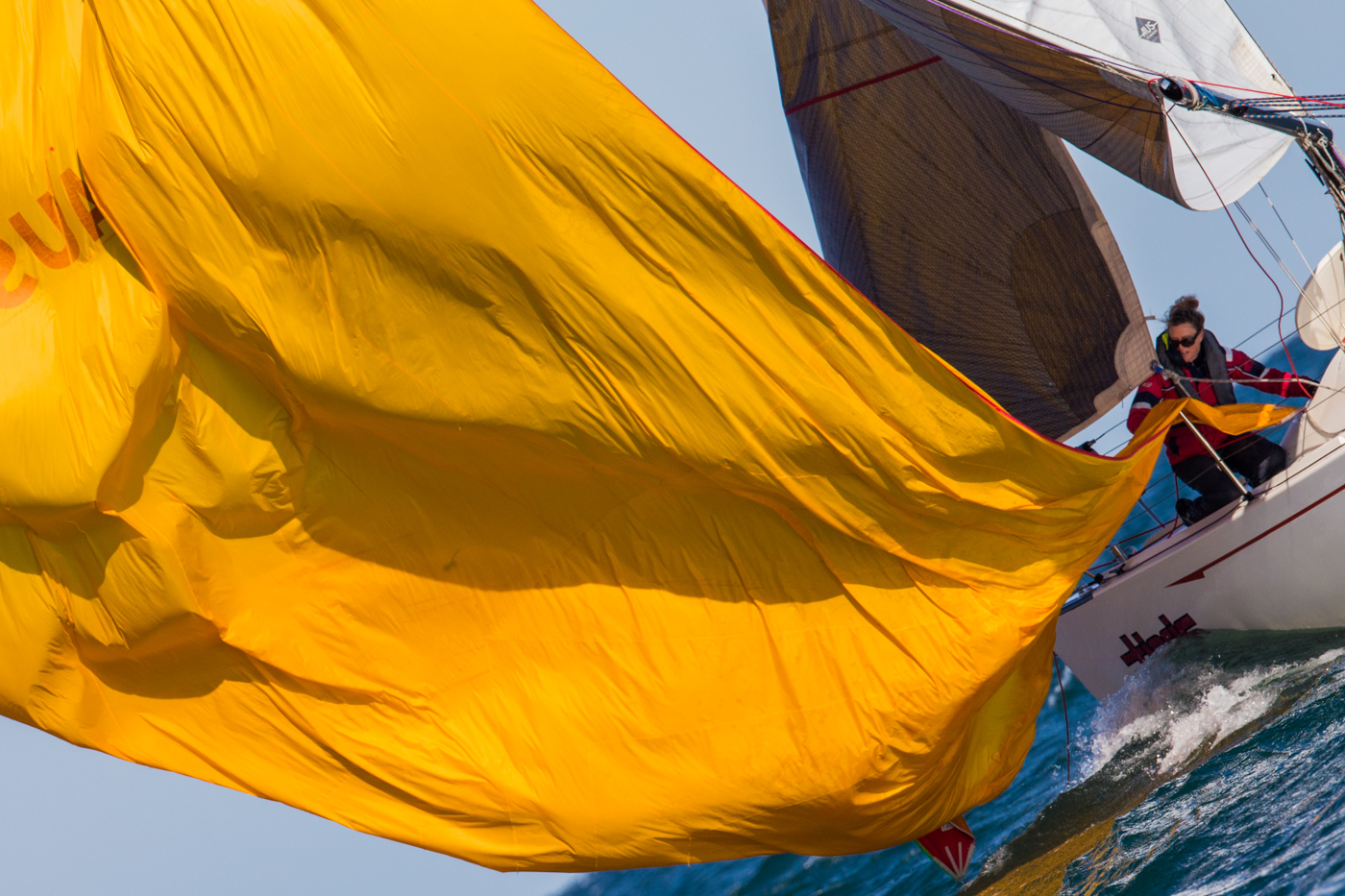 Event organisers wanting to create a community atmosphere in a high profile, competitive regatta could take a leaf out of the Australian Women’s Keelboat Regatta’s book. This regatta focussed on the essence of what sport is really about: community. How was this done? Top quality race management, highest quality protest committee, dedicated staff, eager competitors, constant updates via Facebook/ website and of course free BBQ and beer after every day’s racing.

From the beginning, this regatta sought to attract competitors from all around the country in an effort to provide opportunities for all women to explore, participate in and thrive at in competitive Keelboat sailing. Over the past three days stories of long distance travel, dedication to learning new skills and overcoming odds to participate have been told.

One such story is that of WA skipper, Karen Koedyk, a first time owner and skipper of an S80 from the Royal Perth Yacht Club. Karen’s husband suggested she compete in this regatta to get some more experience and to have some fun so they began contacting people in Victoria to try and organise a boat and crew. With little luck she turned to the Royal Melbourne Yacht Squadron for assistance. Next thing, she’s had an S80 lent to her and scrambled the remaining five crew from the ‘crew wanted’ section of the AWKR website:

“I couldn’t believe that it all came together; it seemed like just a passing conversation (with my husband) and next thing I know we’ve got accommodation, crew and a boat sorted and all thanks to the AWKR committee and Liz and Lou at RMYS.”

We were in a shambles on Saturday, not knowing each other’s name let alone each other’s abilities, but we were astounded by what we achieved by day 3! We all had a great time and this experience has increased our confidence immensely – we even got a half decent result today. The people at this regatta were so helpful and encouraging.”

The regatta itself holds a level of prestige being it’s in it’s 26th year of existence and so with it comes an eagerness to win your place in history. Tension was high with minimal degrees of separation in the results on the last day of the AWKR. With conditions a pleasant 12 knots and flat water from the North/ North West, racing kicked off on time.

It was clear to see in the first start that competitors wanted to seal a podium position at this year’s event. It was a close start with everyone pushing the line and with the gun blown competitors went ‘hell for leather’ to the top mark with an individual recall for a couple boats who mistimed the shifty gusts and pulled the throttle a bit too early.

‘Scarlett Runner 9’ smashed the start, stealing the gap created by the boats who received an individual recall. Being the furthest pin end boat with no close windward competition they put the nose down and made massive gains. ‘Scarlett Runner 9’ have done consistently well over the last three days; skipper, Kirsty Harris, attributes this success to her crew and the competition:

“It’s great to have so many interstate competitors – they definitely keep you on your toes! Today’s conditions were perfect and believe it’s just our well-oiled crew work that kept us going. Only three of us sail together regularly so it was important we got our crew work sorted as soon as possible. We’re very happy with how we’ve sailed over this regatta.”

Division 1 boats were reluctant to tack until half way up the beat with the impending left shift coming down the course; even those who should probably have considered a clearing tack held in there. ‘Absolut’ rolled ‘More Noise’ just as the shift came through giving ‘More Noise’ the perfect opportunity to tack and gain.

‘How Bizarre’ worked hard on the downwind to take the lead on the next upwind- a tribute to the high quality crew work. Similarly was ‘Serious Yahoo’ who sailed exceptionally well today and stood out from the crowd with some smooth boat handling.

The Division 2 fleet split early off the start; like day one ‘Take One’ had a great start and fought hard on the upwind only to lose their competitive position with a couple team members falling overboard (both of whom continued racing for the rest of the day with a smile on their dial). ‘Outlaw’ was first around the top mark and held their position for the majority of the downwind until ‘Vice Versa’ could sneak close enough for a gain on the upwind.

Race two started disjointed with racing being postponed 20 seconds before the start gun, yet it seemed half the fleet didn’t get the message. Patient and understanding as they are, the race committee waited until all the Division 1 boats sailed back to the start before they restarted the race. The postponement itself was due to a consistent 30 degree shift taking effect. As the breeze settled the course was set to the average new wind direction and the countdown started again.

With the change in direction also came an increase in breeze, picking the average to a brisk 18 – 22 knots. For some, this was too much choosing to retire after a long three days of racing. Others took the opportunity to get some last final points yet it seemed that the top three boats in any division needed to get more than a 5th place to make a difference to the scores.

After a long weekend of racing all crews headed back to the Royal Melbourne Yacht Squadron for the final presentations. The past three days seemed to have transformed everyone into comrades who’d battled the harsh winter conditions of Port Phillip together. The presentation room seemed to fill with an atmosphere of both relief and excitement for the awards to come. The ceremony began with a thank you to the AWKR committee, the RMYS and sponsors. It also made special mention to the Logie Smith Lanyon Boat Buoys, who received a standing ovation for their efforts over the past three days. Although a new tradition it was agreed the Boat Buoys is certainly one to continue.

Prior to the final winners being announced, various awards were given to people nominated for their outstanding contribution to the regatta and/or women in sailing. The winners are:

Finally, the winners of the 2016 Australian Women’s Keelboat Regatta across the various division and classes were announced.

Congratulations to all competitors – it seems that most boats who came to this regatta achieved what they wanted. For some it was to win, for others to learn new skills to bring back to their home clubs.

Next year’s regatta will be held over the long weekend from the 10 – 12 June, 2017 at the Royal Melbourne Yacht Squadron. Save the date!

For all information regarding this year’s event please visit the AWKR website or the AWKR Facebook Page.