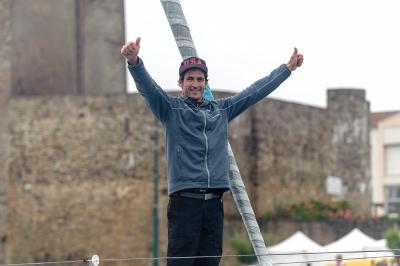 Morgan Lagravière finished ninth in the solo Transat New York – Vendée despite the damage that cost him 40 hours. That early blow did not shake the fighting spirit of the young skipper of Safran, who managed to climb back up through part of the fleet. This performance was a crucial step, full of lessons for him with a few months left before the start of the Vendée Globe on November 6.

In first solo race on Safran, Morgan Lagravière found it a challenging but exciting test that confirmed his desire and ambition to do the Vendée Globe: “Challenges are part of the exercise and it also allowed me to enjoy some moments of simple pleasure,” Lagravière said. “But what you can stand for a few days could make you crazy over 80 days. The violent movements of the boat, the amount of physical effort, how wet it was, and above all, the non-stop high-pitched noise… I had come to this race looking for answers. What can help me to endure all this? Now I've found them. It's competition.”

“Competition has rejuvenated me”

Lagravière, at 29 the youngest skipper in the race, had expressed his excitement at the thought of measuring himself against the stars of IMOCA circuit, who will light up the next Vendée Globe. But a few hours after the start, he was forced to stop after a collision with a sea mammal and re-started 24 hours after two other equally unfortunate competitors, Yann Eliès (Quéguiner – Leucémie Espoir) and Jean-Pierre Dick (StMichel – Virbac) .

“When I re-started, I was feeling very down about the damage. I was afraid I was going to the transat alone, until I realised that Yann and Jean-Pierre were within reach,” Lagravière said. “I have regained confidence in my boat and realised that I have the potential to do well. It was a revelation. Competition has rejuvenated me.”

Lagravière and these two big names fought a race-within-the-race. Handled with skill and courage, Safran, even with a foil amputated, constantly posted higher speeds than its rivals and its skipper demonstrated impressively consistent effort. A few hours from the finish, Lagravière even found the strength to fight out a three-way sprint, sparing nothing all the way to Les Sables d'Olonne. “I was always flat out, continually pushing,” he said. “I went after them (Dick and Eliès), and in my head I was the champion. I'm proud of what I did.”

As Lagravière says, he needed this performance with just a few months until the start of the Vendée Globe: “I wanted to feel credible on a Vendée Globe, and I needed to understand why I'm doing it. When I find those elements that inspire me, it gives me a hunger and that can make the difference. I won't be starting as favourite, but I know I can spring a surprise.”