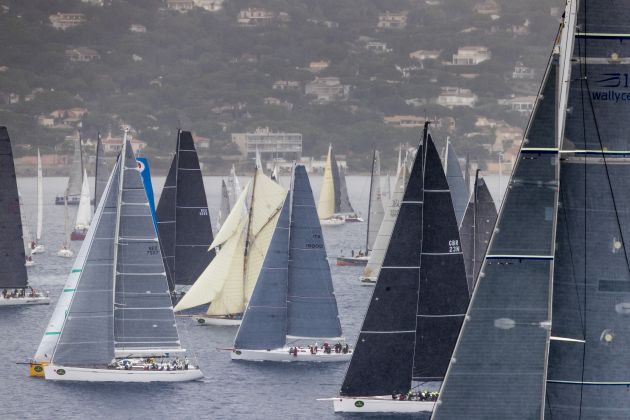 The offshore race of the 64th Giraglia Rolex Cup got underway today at midday, with 268 yachts departing from Saint-Tropez for Genoa, via the Giraglia rock. Following three days of blissful warmth and generally clear skies, the Cote d’Azur went feral with a rain storm blanketing the bay of Saint Tropez just before the first gun.

For the 2,500 or so competitors the ambient spirit may have been dampened, but these are sailors used to putting up with some hardship to pursue their passion. Poor weather is just one of those things to be expected and dealt with.

Predictions for the race have been varied reflecting a confusing forecast for the first 24 hours and initial stages. Routing programmes suggest the bigger yachts could arrive at the Giraglia anytime between the early hours of tomorrow morning and midday. Genoa could be reached between midday Thursday and midnight.

The leaden grey clouds seemed to suck life out of the wind at the start, and one might be forgiven for thinking this is going to be a long slow race. Perhaps, said George Korel, Principal Race Officer of the Société Nautique de Saint-Tropez, who explained the overall situation once outside the bay of Saint-Tropez: “Today, the Mistral is likely to stay the dominant factor between Corsica and the Continent. If the fastest boats can get into these winds the front runners could be quick to the Giraglia. And, while the smaller boats might find themselves in a relatively calm zone to start, on Thursday night/Friday morning the wind is forecast to get stronger at Cap Corse. It looks hopeful that it will be windy in the Gulf of Genoa too, which could mean the yachts will arrive much faster in Genoa than in recent years. I hope so!”

From the start, Sir Lindsay Owen-Jones’ Magic Carpet Cubed visibly declared her size and power taking a firm lead on the short upwind leg to a mark off Saint-Tropez. Rounding the buoy, she hoisted her massive gennaker and proceeded to stretch her advantage over the chasing pack, which included the Maxi 72 Jethou owned by Sir Peter Ogden.

Both Owen-Jones and Ogden are perennial competitors at the Giraglia Rolex Cup. “Doing this race is always a huge pleasure,” says Owen-Jones. “We spent a long time trying to win it overall, and to do so last year means a lot less pressure this time. We can enjoy it so much more, especially rounding the Giraglia which is a magical moment in the race.” Ogden is in accord with his compatriot’s view of the race: “I just love it. Rounding the rock is a mystical experience that I just never want to miss.” By 14.30 Magic Carpet Cubed and Jethou had confirmed their status as front-runners having passed the next mark of the course just off La Taillat. Heading to the Giraglia at about 10 knots they had successfully passed through the first of the wind transitions.

At this point, remainder of the fleet was strung out in a line between La Rabiou at the eastern end of the bay of Saint-Tropez and La Taillat to the south, with the prospect of a long afternoon and evening ahead as they work across the transition into stronger breeze offshore.

Once heading east to the Giraglia the yachts face their first big tactical decision of the race according to Giancarlo Ghislanzoni, a Yacht Club Italiano member and experienced campaigner of Chestress 3: “The rhumb (direct) line to the Giraglia looks pretty straight, almost 90 degrees to the east. But in most editions, sooner or later along that line, there is an area of light wind. So, very rarely is sailing the rhumb line a winning strategy. The big question is whether to sail to the north or south.”

Ahead of the start the decision was not yet made: “Generally on this segment the wind is from the west. This year looks different with apparently mostly headwinds for us!”

The overall winner of the Giraglia Rolex Cup is decided on corrected time. The wind conditions on the course always play a part in determining the eventual outcome. This is part of the fascination for sailors like Ghislanzoni: “You constantly fight to get the best performance from your boat throughout the race, but just like life there are external elements that you have to deal with. The wind is just as much that as your competitors.”

This year it is too early to tell whether the front, middle or back of the fleet will be favoured. Tomorrow the picture will be clearer.