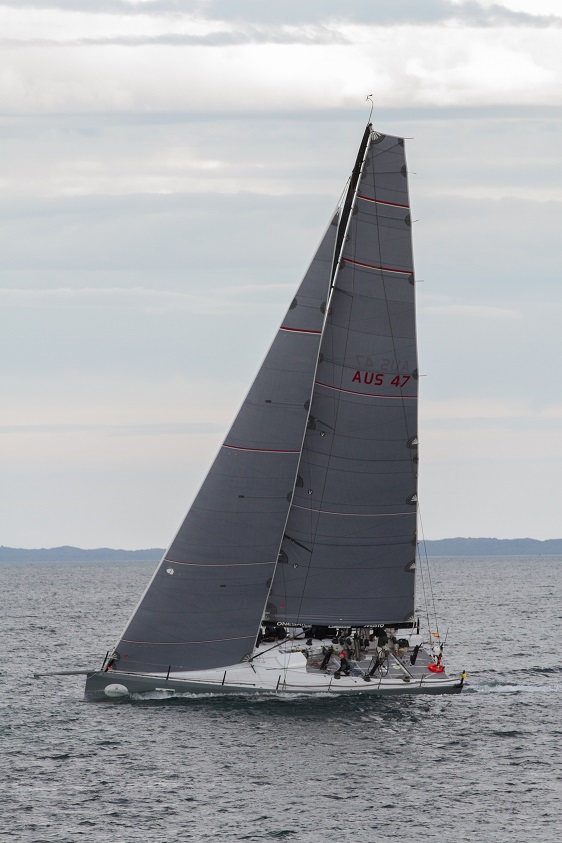 The decision by Craig Carter, owner of the Carkeek 47 Indian to contest the WA Blue Water Championship and the Rolex Sydney to Hobart Yacht Race in the same season presented a number of challenges and a huge logistical task. With 4000km separating Perth and Sydney and a tight schedule of races at either side of the Sydney Hobart Race the operation would have to run like clockwork.  Craig’s team, captained by World Champion sailor and Sailmaker Paul Eldrid stepped up to the task and set a rigorous schedule in order to execute this ambitious project. WA’s Blue Water Championship comprises of 7 Ocean Races over the summer season starting in October through to April and totalling just under 1200nm of racing.   The Sydney to Hobart Race, lead up races and deliveries would add a further 1300nm, making the 2015/16 summer campaign over 2500nm of sailing.

The overall winner of the Blue Water Championship receives the coveted SISKA TROPHY, originally the Golden Fleece Trophy which was commissioned by the Golden Fleece Oil Company for the 1978 Great Circle Yacht Race around Tasmania, a distance of 810 nautical miles. It was won by SISKA, owned and sailed by Rolly Tasker. In 1988 Rolly Tasker rededicated it as the SISKA TROPHY. He presented the magnificent trophy, to be awarded annually, to the most outstanding yacht in the Western Australian Offshore Yacht Racing Series. Rolly Tasker built and raced 5 offshore yachts named SISKA and over a 15 year period from the 1970s won almost every race on the WA Offshore Calendar. SISKA’s competed in Sydney-Hobart Races, the infamous 1979 Fastnet Race, the Parmelia Race and the first Fremantle to Bali Race in 1981. Rolly Tasker passed away in June 2012 at the age of 86.

Unusually soft conditions for spring and with a notable absence of the infamous Fremantle Doctor the fleet set out in a warm southerly on the long upwind leg from Fremantle to Mandurah, then running out to Rottnest Island before returning to Fremantle.  As the race dragged into the evening the bigger boats were favoured as the breeze dropped with Indian 2nd behind Peter Hickson’s  TP52 M3 with Alan Stein’s GP42 Dirty Deeds Coming Home 3rd.

With summer finally arriving and the ‘Doctor’ blowing the downhill sleigh ride to Geraldton was on!  As the planing boats roared away from Rottnest Island at speeds in the high teens and early 20’s the big question was “will we see the early morning shut down?” which has broken many hearts so close to a race record in the past. With no sign of the breeze easing up all night but continuing its persistent shift east, Indian and Dirty Deeds benefited from perfectly timed approaches and General Lee’s  2010 record (for non-ballasted / canting boats) of 18:18:33 looked certain to fall.  It did, with Indian setting a new race record of 17:11:22 and a 2nd overall on corrected time to a very well sailed Dirty Deeds with M3 in 3rd place.  This race qualified Indian for the Rolex Sydney to Hobart in December.

The race back to Fremantle is notorious for breaking boats, sails and bones by stiff southerlies produced at the fabled “wind factory” that is the Coral Coast.  The lack of a dominant high pressure system and a low pressure system inland produced light and tricky conditions with most welcoming the lack of reefing mainsails and storm jibs, particularly to the Indian team who, having now completed the qualification for the Rolex Sydney to Hobart Race were facing a tight schedule to start packing up the boat immediately on return from this race.  M3 finished 1st , Indian  2ndand Dirty Deeds 3rd . Thankful for the kind race on the boat Indian was stripped and bone dry on touching the dock and was in the lifter the following day being dis-assembled. 5 days later Indian rolled out of Fremantle bound for Sydney….

Following the arrival in Sydney, Indian competed in the Bird Island Race, CYCA Trophy Series and Rolex Sydney to Hobart Race. The gale force conditions at the start of the race presented further challenges for the team – with the boat’s cradle already in Melbourne and a truck booked, retiring from the race would have been a major setback and was paramount in the risk management of the program.  Having broken a bobstay and bowsprit chasing the 52’s down the Tasmanian coast, Indian jury rigged systems to use fractional spinnakers and finished 11th over the line, a solid performance in what was a very tough race.

On new years’ day Indian pulled out of Constitution Dock, bound for Williamstown in Melbourne, arriving 0400 January 4th.  Just two days later on January 6th it rolled out of Williamstown on a truck bound for Fremantle for repairs, re-assembly and preparation for the Bunbury Race starting 29th January…

Unseasonal conditions with a large trough pushing down from the north saw the fleet leave Fremantle in a warm south easterly, a far cry from the usual stiff south westerly Doctor.  A waterline race ensued with just cracked conditions in possible the nicest race to Bunbury ever!  On rounding the mark in Bunbury harbour and turning for Fremantle the breeze lifted from the south east and Indian leapt onto the plane under an A2 and charged towards Fremantle, overtaking the Inglis 60 Walk on the Wildside and extending the lead on Dirty Deeds.  With continued fast running into the early morning and gybing around isolated cells of pressure and rain squalls the team made good work of the conditions.  Good enough in fact to claim not only Line Honours and IRC but also the Race Record of 17:47:03.  Wildside 2nd , Dirty Deeds 3rd

An evening start in a moderate Southerly this upwind race looked set to benefit boats with more time on the track, as the breeze would persistent shift left and lift throughout the night and morning.  Playing out as forecast the 40 footers finished strongly with Chris Higham’s A40 Agro snatching the overall win from Anthony Kirke’s Farr 40 Enterprise with Dirty Deeds 3rd and Indian 4th

A favourite on the WA Calendar, the Naturaliste Race has the fleet race south and round at Bunkers Bay, Dunsborough just near Cape Naturaliste than back to Fremantle.  Typically long enough to transition through two or three significant changes in breeze again it didn’t disappoint! Starting into a bumpy Southerly left over from strong South Westerlies earlier in the week, most of the fleet pressed inshore hoping for the shift to the SE then E to free up sheets and the sea to flatten approaching Geographe Bay.  Indian rounded Bunker Bay first but not far enough on time to Dirty Deeds at that stage.  Both boats had plenty on the remainder of the fleet.  With the overall standing tight between the two there was a lot to play for on the run back to Fremantle.  With the breeze not wanting to settle work rate was high on board Indian with sail changes from A2 to A4, then Masthead Code Zero, then Fractional  Code Zero, then Reefed mainsail and back through the A2 and A4.  It paid off with Indian taking the win and a new race record of 22:56:06  . Dirty Deeds 2nd and Rob Halvorsen’s Giddy Up 3rd.   This result gave Indian an unassailable position in the Blue Water Championship and would go into the last race having already won the series.

A bumpy sea and light winds were the residual leftovers from a week of stiff westerly storms for the last race of the season.  On rounding Cape Vlamingh at Rottnest Island a light VMG run north to Lancelin tested everyone with the sea bouncing air out of spinnakers and making hard work for trimmers and grinders all the way into the evening. Tired crew were left hunting in a black moonless night for a rounding mark with a broken strobe, echoed by some “interesting” radio calls as each of the boats rounded during the night.  Favourable conditions for the very competitive 40 footers on the leg from Lancelin to the Fremantle finish saw the margins set by Indian and Dirty Deeds vaporise as both fell from the podium.  With 1st and 2nd overall placings already secured by Indian and Dirty Deeds, the focus on the battle for third in the championship continued.   In a huge finishing effort Chris Higham and his team on Argo came home with a strong IRC 3rd overall to slide into 3rd overall for the series, nudging out Anthony Kirk’s Enterprise on countback.