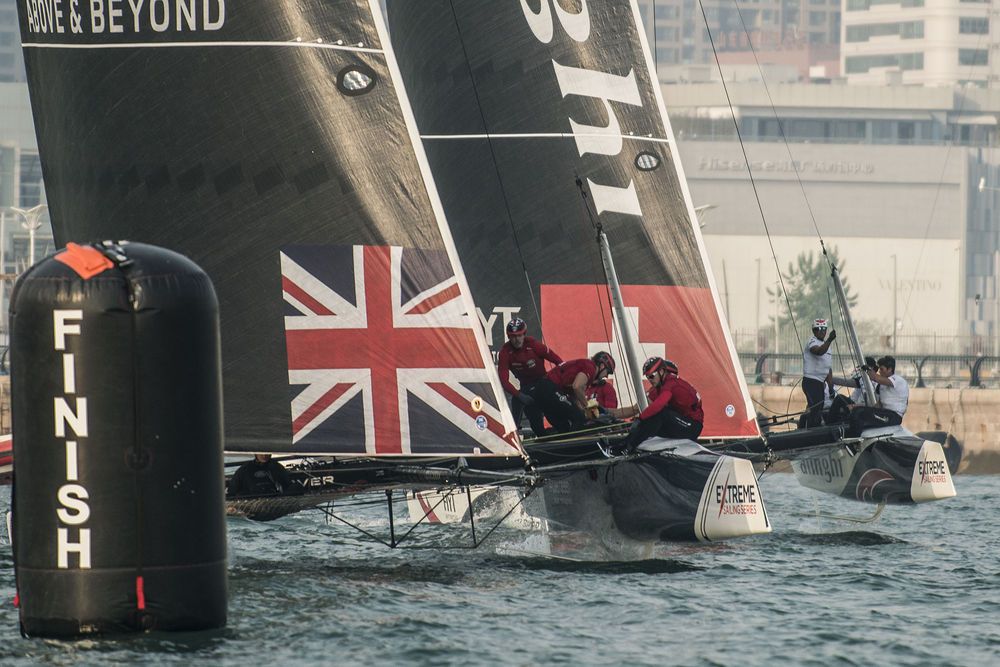 The young guns on Land Rover BAR Academy were the team of the day in Qingdao as they took two race wins and three seconds on day three. Photo © Xaume Olleros / OC Sport.

Extreme Sailing Series young guns Land Rover BAR Academy stole the show on the penultimate day of Act 2 in Qingdao, China, jumping from last place to second with a masterclass of consistency.

Skipper Rob Bunce's team of talented under 24s enjoyed their most successful outing since joining the global Stadium Racing tour at the start of 2016, only missing the podium once in seven races on Fushan Bay.

The British team, the youth wing of Sir Ben Ainslie's America's Cup challenger, went into the action at the bottom of the Act leaderboard following three disappointing results on the opening day. But they turned their fortunes around in style, excelling in the punishing conditions that built from almost non-existent puffs to 20 knots of full-on breeze, notching up two race wins, three seconds and a third in the process.

“What a fantastic day – we really deserved that,” a beaming Bunce said. “We're amazingly happy to have been that consistent all day. In the light conditions we were quick and then when the wind came in we picked it up and did all the right things. We were all over it – we're ecstatic.

“We had the right mentality, staying patient in the light winds then upping our level as the wind built. We knew what we needed to do today and we did it. We're pretty excited to get racing tomorrow.”

Fellow youngsters NZ Extreme Sailing Team, the newest crew to join the Series, also impressed with one victory, two runners-up finishes and a third moving them onto the podium behind Land Rover BAR Academy and overall Act leaders Alinghi.

“We're pretty happy to finish in the top four in every race – it's definitely where we want to be,” co-skipper Graeme Sutherland said. “We progressed as the day went on and found a bit of consistency. We're still learning a lot but we're happy with where we are right now.”

Insights from the Extreme Sailing Series' Official Technical Partner SAP show that the top three teams each have six podium finishes under their belts after 10 races.

While some teams rose to Qingdao's challenge, others – including tour heavyweights Oman Air and SAP Extreme Sailing Team – struggled to find their trademark speed and regularity.

Oman Air hit their stride uncharacteristically late, pulling off a win in the final race of the day when the breeze shot up and treated the crowds enjoying China's Labour Day holiday to a real spectacle of foiling action.

And there wasn't to be any birthday presents for Red Bull Sailing Team skipper Roman Hagara, who turned 51 today – three podium finishes were matched by four back-of-the-fleet results to see his team go into the final day in fifth overall.

“It was really tricky, especially in the light wind,” Hagara said. “If you got a gust at the start you were off, and if you didn't you ended up at the back of the fleet. It was also hard with the big breeze at the end of the day, racing on a tight racecourse. I definitely didn't have as much luck on my birthday as I'd hoped. There were no presents for me from the others today.”

With a more consistent breeze predicted for the final day of racing tomorrow, the Act leaderboard couldn't be tighter with just six points splitting the top three teams.

The final race of the Act will carry double points, offering teams a last-minute opportunity to boost themselves up the rankings.