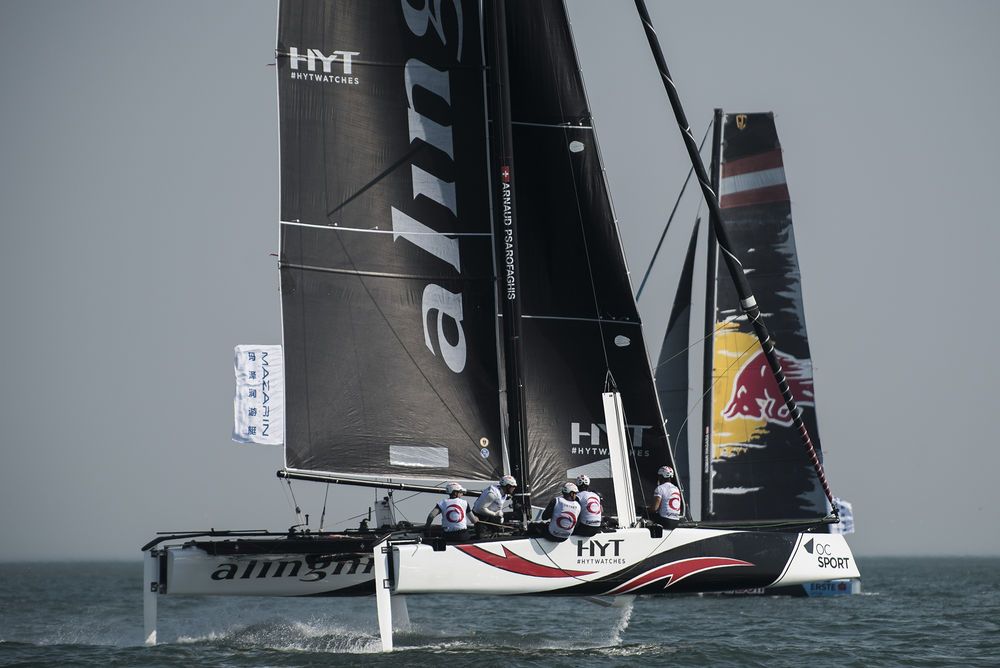 Alinghi took advantage of the last minute breeze and sit at the top of the Act leaderboard after three races on day one. Photo © Xaume Olleros / OC Sport.

Qingdao went from calm to classic in a matter of minutes today as Act 2 of the Extreme Sailing Series got off to an exciting start.

China's Olympic Sailing City is renowned for its tricky weather conditions that can catch sailors off guard with sudden changes – and the opening day of Act 2 Qingdao “Mazarin Cup” was a prime example.

As the fleet of seven international crews hit the water the wind was down to just a couple of knots, delaying the start of racing for almost two hours.

But just when it looked like Race Director John Craig would have to give up hopes of running scoring racing on day one the weather gods woke up and, from nowhere, delivered an unexpected but welcome 15 knots to the race course outside of Fushan Bay.

The new wind was more than enough for the fleet of super-fast GC32 catamarans to 'fly' on their hydrofoils providing a stunning spectacle for the crowds that lined the shore.

As the Extreme Sailing Series' well-established rivalries resumed it was Swiss crew Alinghi that emerged on top after three races in the challenging breeze.

A win in the opening race followed by two second place finishes was enough to set co-skipper Arnaud Psarofaghis' men, reigning Extreme Sailing Series champions and winners of the Qingdao Act in 2016, on an early path to the top of the leaderboard.

Red Bull Sailing Team complete the podium after the first day of racing with one win and a second to their name.

“Day one went really well for us,” said Psarofaghis. “It was tricky out there but the crew managed to do a really good job with the manoeuvres and Nicolas Charbonnier, our tactician, found some great lanes. The shifts were huge – some were 25 degrees – so you needed a little bit of luck to be in the right place at the right time but thankfully we got that. We're really happy with how it went.”

“It feels good to get the first day nerves out of the way and come back to the dock with some good results,” said Gram-Hansen, who previously led SAP Extreme Sailing Team to glory in Qingdao in 2015.

Two thirds saw NZ Extreme Sailing Team finish fourth ahead of Oman Air in fifth. The Omani-flagged team started strongly with a third place in the opening race but struggled with consistency, crossing the line in last place in race two and fifth in the final race of the day.

Skipper Phil Robertson said the team would regroup ahead of day two and come back stronger when racing moves inside Fushan Bay.

“We had a real stinker today,” Robertson said. “The conditions were extremely difficult – very gusty, very shifty. It's really frustrating when it's like that because you can go from first to last really quickly. Conditions tomorrow will be completely different but still really tricky. We're going to have to talk about how we can deal with that the best. We're not too happy right now but tomorrow's a fresh start.”

Wildcard crew Team Extreme, co-skippered by Qingdao sailor Liu Xue who goes by the nickname Black, had a slow start but gave the home crowds something to cheer about when they narrowly missed out on a podium spot in race three.

“We haven't sailed as a team before so we didn't do too badly for the first day,” said Black, who is part of the Chinese-flagged Dongfeng Race Team in the Volvo Ocean Race. “We now know what it feels like to 'fly' so tomorrow we will aim to do much better.”

Land Rover BAR Academy round off the leaderboard in seventh place after day one.

Racing resumes at 14:00 local time (UTC+8) tomorrow. Follow the action on the live blog or through the Extreme Sailing Series social media channels.