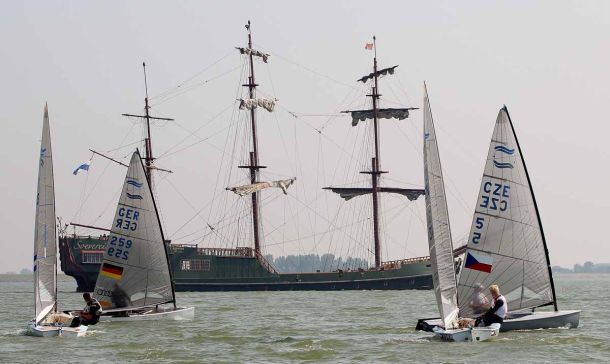 No action at the Finn Silver Cup. Photo Robert Deaves.

The weather is throwing is best and its worst at the Finn Silver Cup. After Wednesday was lost through too strong winds, another day was lost Thursday with not enough wind. The day spent in sweltering temperatures and no wind, and while one race was started, it was abandoned at the windward mark as the wind vanished into the humid Dutch air.

There is now just one day left of the championship, but with six races already completed, enough have been sailed to make it valid. However there are a lot of sailors who want to complete more races to achieve their goals for the week. Three races are possible on the final day, but the forecast is not very encouraging.

Race 7 started on time but the 5-7 knot light wind soon started to drop. There was a massive spread on the fleet with the right side hung out to dry as the wind died there first, but as the wind fell under 3 knots at the top mark the race was abandoned. Lars Johan Brodtkorp (NOR) proved his ability in light wind to lead round the top mark from Nenad Bugarin (CRO) and Matthew Koblinski (POL), but by then the water was like glass and the race was abandoned shortly afterwards.

A light breeze filled in nearly an hour later, but the conditions were very humid with bad visibility to the east, and the wind didn't stay. At 13.00 the race officer sent the fleet shore to wait, hoisting AP over 6, for a first possible start at 17.00. More wind was expected later in the day, but by 16.00 nothing had developed and racing was abandoned for the day.

Two sailors who are hoping to get more racing in are Riccardo Bevilacqua (ITA) and Anatoly Korshikov (RUS), who are here as part of Team Fantastica. They have some extensive experience helping them compete at the Silver Cup with coaches Yuri Tokovoi (UKR) and Vladimir Krutskikh (RUS), guiding them through the intricacies of international competition.

Bevilacqua is in 15th overall after a fairly consistent set of results, but is aiming for the top ten. “Downwind in light wind is good for me at the moment, but what I really need to work on is my starting. I need to train with more and more people and do some more starts to try and arrive higher up at the first mark.”

He only started sailing the Finn in 2013, after some moderate success in the Laser 4.7 class, and then joined Team Fantastica at the Finn Silver Cup last year. “Being part of Team Fantastica is very important for me because I don't need to think about anything. I only need to focus only on the sailing and to improve my sailing.”

Korshikov also joined the team in 2013. “When I started sailing with the team I got a good boat, good sail and everything else. The team has given me a lot of help.”

“I want to sail my best this week, and I already have some good results. And some not so good. The top ten would be good for me but now I am I in 19th and I have a bit of work to do. So I hope we will be able to race.”

However, the forecast for Friday is not promising, though it changes almost by the hour. Less than 5 knots is forecast for most of the day. With a latest warning signal time of 15.00, the racing has been brought forward to 11.00 to try and get three races in.