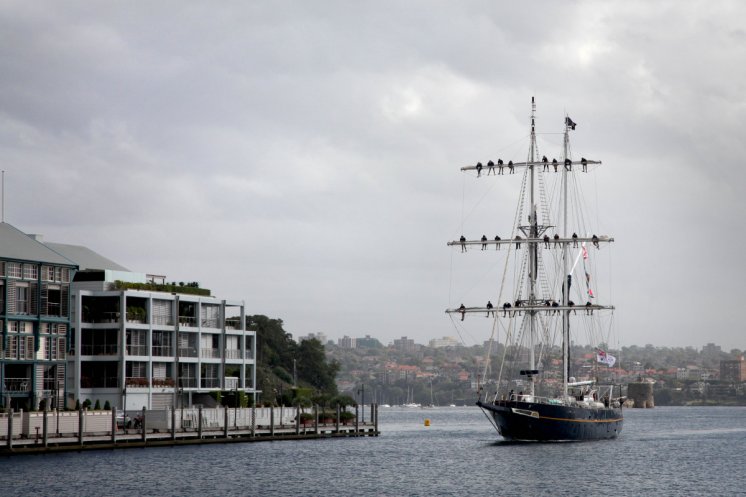 Since departing Sydney in May 2016, more than 500 young people have developed important leadership and life skills as part of the youth development program conducted onboard.

During each of the 11 to 13-day voyages, 24 youth crew learnt the skills necessary to sail a square-rigged tall ship.

This included how to navigate, keep watch, cook in the galley, set and furl sails, take the helm and climb the 30-metre mast.

Each crew elected a leadership team to command the 44-metre brigantine, taking over while the Navy crew assisted.

She said taking command of the vessel was daunting but highly rewarding.

“At first we were worried about what to do, but we helped each other and got the job done,” Ms Wicks said.

“It was amazing to see how, over 10 days, people who were once strangers could step up and become a great team.

“We successfully sailed a ship along the west coast of Australia. That is a once in a lifetime experience.”

Youth crew are selected by ballot, and no sailing experience is required. Young Endeavour is operated by a professional Royal Australian Navy crew that ensures the highest standard of safety and care, and teaches the young crew everything they need to know to sail the ship.

“I applied as I wanted some adventure and to try something different,” she said.

“The camaraderie was great and I was proud of myself for climbing the mast, learning all of the sailing terminology and for not being sick. I pushed myself in a lot of ways.”

Command day was a chance for the youth crew to use their newly learnt leadership skills, she said.

“Having command you see everything in a different light. We learnt a lot and we did well as we arrived at our destination!” she said.

Young Endeavour visited the Top End for the first time since 2009 during the circumnavigation.

Five of the 20 voyages around Australia delivered a Young Indigenous Leadership Program.

The Young Endeavour Program is an internationally recognised youth development program that has been teaching teamwork, leadership, communication and resilience skills to young Australians for more than 25 years.

In 2017, Young Endeavour will sail to Brisbane, Bundaberg, Airlie Beach, Mackay and Newcastle, before returning Sydney in October.

Applications are open to young Australians aged 16-23 at www.youngendeavour.gov.au. Offers to sail will be made from April.