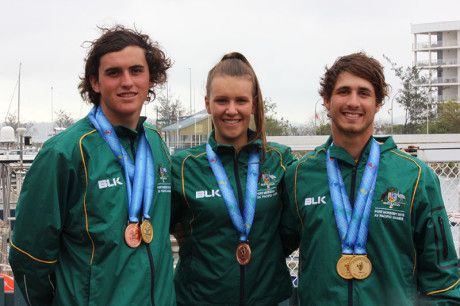 PACIFIC GAMES: Australia has come away with four medals after a magnificent week of sailing at the 2015 Pacific Games in Port Moresby, Papua New Guinea.

The men’s laser was a hard fought event all week between the two Australians and New Caledonia’s Maxime Mazard, who scored silver with 21 points.

20-year-old Spearman said it was a fierce battle, despite finishing first in eight out of 10 races. “It was a really awesome event. There was a lot of really tough racing between me, Tom and Maxime and you just had to be working really hard the whole event. It was really good to win gold,” he said.

Both Spearman and Vincent said it was helpful to have a teammate in the same event. “It’s alway good fun to have an extra person there for support. We can’t help each other on the water but we talk before and after. To come home with two medals and the team trophy, I’m pretty stoked,” Vincent said. “We talk through what we think the wind is doing and what our plans are before the race. It’s just good to talk to someone, it’s a bit lonely out there by yourself on the boat,” Spearman said.

Vincent said the conditions were great for racing. “We had good conditions, good breeze on the first few days solid trade winds from the south-east. Nice and consistent and then later in the regatta we got a bit of rain so that made it interesting,” he said.

Spearman appreciated the Port Moresby warm weather. “The water’s really nice after coming from Perth in winter. It’s really warm and you don’t get cold at all, even when it’s pouring with rain.”

The duo both praised the Game experience.

“It’s good to meet other Aussies who have a passion for sport like this. We got to see the rugby girls and the weightlifters compete. The whole experience has been really good, the competition and the way it is over here – it’s like we’re at the Olympics it’s pretty cool,” said Vincent.

“I think it’s been heaps of fun especially going to watch their sports and supporting the other Aussies in the rugby sevens and weightlifting. I hope I can do it again, I hope Australia gets invited to compete again,” said Spearman.

For Brisbane’s Bridge, the Games was her first international regatta and a tough challenge against the Cook Island’s Helema Williams (gold) and Teau McKenie (silver).

The 17-year-old scored 26 points across the 10 races, including two first places.

“It was great racing and I’ve learnt a few things it’s challenging for me in these big winds so it’s something to work on for the next races,” she said. “It’s been great having all the other countries’ competitors here, it’s made it a really enjoyable week.”

All three young sailor will compete at the National Championships in December and have their eyes firmly on Tokyo 2020.