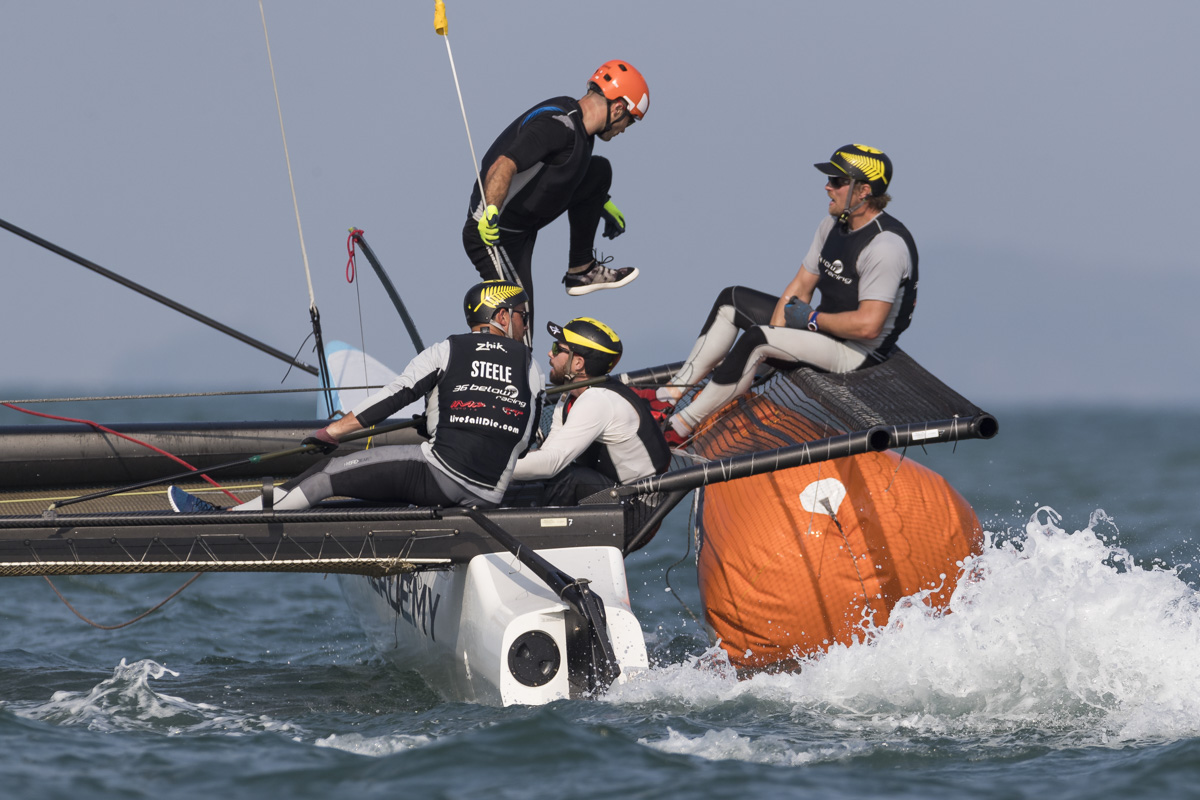 Shenzhen, China (October 25, 2017) – There are no fools among the 18 teams battling for supremacy at the 2017 Match Racing World Championship, but after two days of fleet race Qualifying three skippers are battling for survival through to the Super 16 Stage. This is the final of the World Match Racing Tour, so the heat is on for the young Australians Steve Thomas and Matt Jerwood who are joined by young Dane Joachim Aschenbrenner in the Sail Off. This will determine which one of these three progress to the knock-out stages in the match racing.

Thomas has managed to recruit three veterans from the recent America’s Cup on to his crew, although they have been struggling to get their choreography working on a race course where split-second timing and silky-smooth boat handling are critical to success. “This field, this regatta is massive,” said Thomas. “They’re the best in the World so you can’t just come here with a fresh team and expect to do well against the crew that have been putting in the training. Yeah, I’ve got three guys straight out of the Cup, but our performance doesn’t reflect on them. It just goes to show how a boat handling error can drop you into last place very quickly.”

Thomas is trying to remain upbeat. “In theory we’re up against the weaker teams, although someone like Matt Jerwood is not going to be easy to beat. For us I think it’s about getting the processes right; we’ve got a bunch of new boys together on the boat, so we’re going to treat it like training. We’ll take it one race at a time and hopefully improve, not be last!”

Taylor Canfield had the best day on the water, with stronger breeze of 12 to 13 knots and lumpy swell working to the US Virgin Islands skipper’s advantage. The former World Champion won three heats straight, only falling in the final race of the day with a 6th and last place. Canfield tops the group, two points ahead of defending World Champion Phil Robertson from New Zealand. “Maybe we got a few lucky breaks at times but we sailed really well and the boys did a really good job of digging us out of trouble,” said Canfield. “We made a lot of good decisions and, besides a few hiccups in the last race, it was a very good day.”

Young Swede Måns Holmberg narrowly avoided relegation to the Sail Off, squeaking ahead of Steve Thomas by a single point. He’s ready for a change of tactics in the one-on-one of the match racing. “We’re still getting up to speed. I’ve done a few mistakes in the fleet racing but the crew is helping me out and making some great decisions. I think we’re better in the match racing, and this event suits us quite well because we’re better in the light stuff, and that’s what’s on the forecast.”

In Group 2, although Chris Steele didn’t quite dominate to the same extent as on day one, the New Zealand skipper steered 36 Below Racing to some solid finishes to win the division 9 points in front of two teams tied for second place, Australia’s David Gilmour and Great Britain’s Ian Williams, the multiple World Champion from the keelboat era of the World Match Racing Tour. Steele’s performance was the best of the fleet racing, making him top seed for the Super 16.

In Group 3, the Dutchman Pieter-Jan Postma got better throughout the day as he steered Sailing Team NL to scores of 4,3,2,1 – sufficient to clinch the group by a single point from Australian Harry Price who finished tied for second place with Nicklas Dackhammar from Sweden.

Thursday is the most critical day yet. The Sail Off will see which of the three bottom crews is sent in for an early bath, although once the Super 16 concludes there will be another seven teams who will also be going home by the end of the stage. As the week progresses into the match racing knock-out stages so too is the wind predicted to drop lighter, which Taylor Canfield believes will throw the field wide open. “Everyone here is ready for a fight, and with the light air it’s going to be tricky, hard to make the right decisions. Everyone’s going to be competitive.”