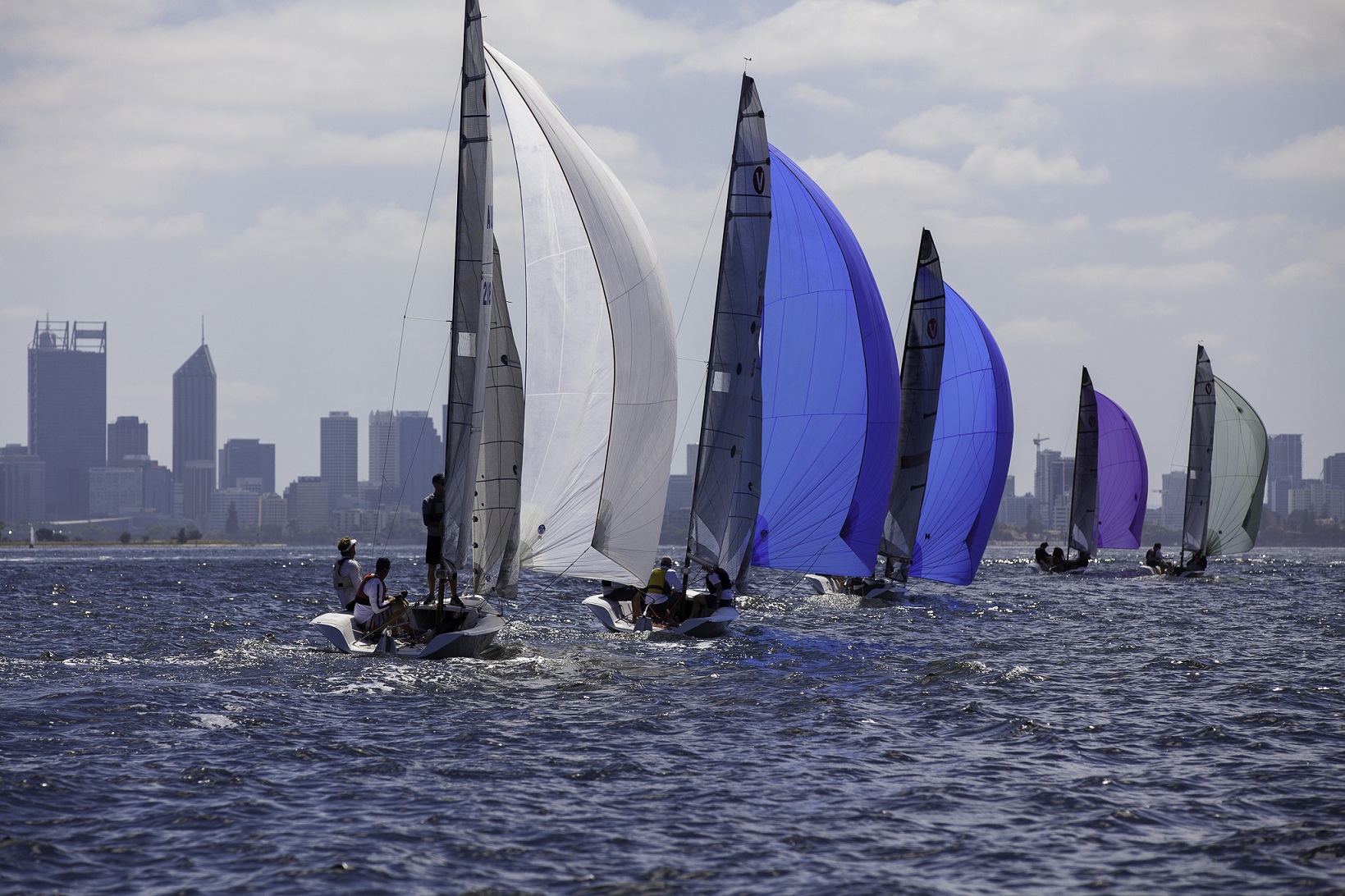 Vipers at the pre-worlds on the Swan River. Photo Bernie Kaaks.

Justin Scott, one of the many international skippers who travelled to the South of Perth Yacht Club to compete in the Schweppes Viper Worlds 2018 on the picturesque Swan River, stamped his authority on the fleet today with two wins, to move him to the top of the table in the Pre-World Practice Regatta. Sailing with local sailors Luke Elliot and Conor Nicholas, each of whom have chalked up international success themselves in the Laser class, Scott sailed away from the fleet in the third race of the series and won the final race on the last downwind leg, overtaking early leader Alex Landwehr in the closing stages.

Britain’s Lawrence Crispin made up for an unwelcome start to the day with his eighth and fifth placings to move into the top ten. His day began badly when he ran aground on a mud bank near the launching area, needing a tow back into navigable water.

“The race area is a bit like Bermuda” Crispin said, comparing the Swan River to the last world championship for the class. “We are aiming to at least claim a place in the top five.” After today’s outing, that aim would seem to be well within the crew’s reach.

Nick Jerwood had a quiet day today. A score adjustment from yesterday’s second race saw his dead heat first place reduced to an outright second, which he followed up with a fourth and a sixth today to leave him in second place overall. “It’s great sailing with Matt (Nick’s son, a world match racing champion),” Nick explained. “He’s brilliant.” Strong praise indeed from a man who holds a world and several national titles in the Flying 15 class. Nick is a proven competitor at the top level and will be a force to be reckoned with as he and Matt become increasing familiar with the Viper 640.

Once again, today’s racing was conducted in very light conditions, the breeze rarely rising above six knots. Heavy weekend power boat traffic travelling at speed through the race area in big boats made conditions challenging for competitors as they struggled through significant bow waves, but when the championship begins tomorrow, the weekend warriors should be back at work and through traffic will no longer be an issue.

Weather conditions tomorrow, influenced by a cyclone in the far north of Western Australia, should be vastly different to the two days of practice racing. By the time racing is scheduled to begin at 10 in the morning, winds will already be close to 20 knots and are forecast to rise to close to 30 knots by the end of the day. The form guide for the past two days then, will count for very little!

Tasmanian race officer Nick Hutton was forced to do the detail work today, with his local race officer Les Swinton unwell and recovering at home. The pair will certainly have their work cut out to manage tomorrow’s expected blustery conditions.

Full results are at: http://www.topyacht.net.au/results/sopyc/2018/vipwlds/vipwlds/SGrp1.htm