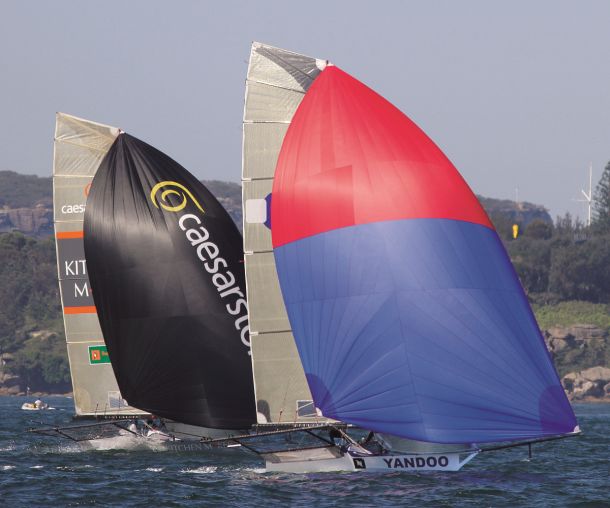 With the 2015 JJ Giltinan 18ft Skiff Championship less than one week away, today’s Presidents Trophy race on Sydney Harbour took on added importance as the final lead up to the world’s biggest 18ft skiff championship.

A light north east breeze proved just the right conditions for the veteran Yandoo team of John Winning, Andrew Hay and Cameron McDonald when they scored a 1m6s victory over a determined The Kitchen Maker team. Yandoo trailed the early leader De’Longhi over the first lap of the course but once in front on the second beat to windward was never headed before taking the race. The win wasn’t quite as easy as the margin suggests as The Kitchen Maker (John Sweeny, Rob Bell and Pete Nicholson) were in strong contention until the final leg of the course

De’Longhi grabbed the early lead when the crew elected to sail to the right hand side of the course and benefitted from the easterly slant in the breeze. Team De’Longhi continued to lead at the wing mark and the bottom mark on the spinnaker legs but Yandoo had reduced her lead from 40s to 15s.

Yandoo’s team went to the right of the course on the second beat while De’Longhi surprisingly went to the left after doing so well on the right on the first lap. With a slightly fading breeze the final lap became more a one course follow the leader style race and Yandoo’s crew used all their experience to hold off the challengers.

THE J.J. GILTINAN 18ft SKIFF CHAMPIONSHIP WILL BE SAILED FROM 14-22 FEBRUARY 2015. The club’s regular ferry will follow the racing, leaving Double Bay Wharf, alongside the clubhouse.

NOTE ALSO:  There will be two spectator Ferries on Sundays 15 and 22 February.