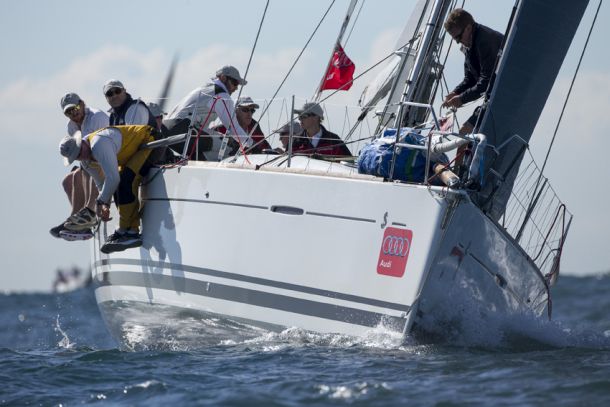 JustaDash won a close duel around the course with Adrian Van Belen’s Jackpot to win the PHS division and have her name engraved on the silver Milson Memorial Cup, also taking out the IRC division from Jackpot, with corrected time margins of less than a minute and a half in both divisions.

Bob Cox’s Nine Dragons place third overall under both scoring systems over a course that had been shortened because of a delayed start from Watson’s Bay.

The Milson Memorial Cup is the last of three traditional short ocean races conducted over the summer season by the RSYS. Apart from prestige of winning the perpetual trophy, the event is also race seven of the CYCA’s Grant Thornton Short Ocean Point score.

A light north-easterly sea breeze saved the day after lack of wind delayed the start for more than hour.

The morning south-wester on the Harbour died away right on the scheduled start time of 12 noon, leaving race officers with no choice but hoist the AP flag. An hour later a light but building nor’easter swept through the Heads and the 25 boat fleet finally away at 13:08 hours.

Offshore, the breeze strengthened to a steady 10-12 knots, giving the fleet excellent sailing conditions on a hot summer’s day with Michael Cranach’s Triton leading the fleet around the course in 1 hour and 48 minutes, crossing the line back in Watson’s Bay comfortable clear of Nine Dragons, Khaleesi and Justadash in Division 1.

Peter Franki’s Saltshaker notched up a treble in Division 2, leading the fleet home and taking first place on corrected time under both IRC and PHS scoring.