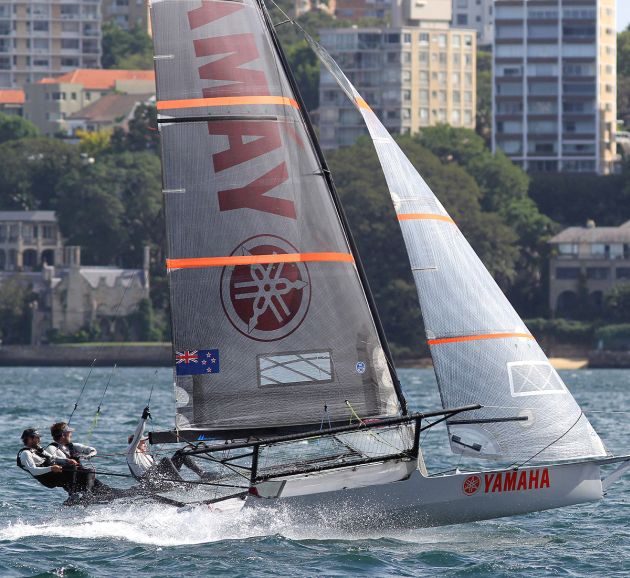 New Zealand champion Yamaha team tightened the grip on the 2017 JJ Giltinan 18ft Skiff Championship, sponsored by The Winning Group, with another stunning victory in today’s Race 2 of the championship on Sydney Harbour.

The race was sailed in another southerly wind, which ranged between 19-24 knots. Most teams elected to go with the smaller #2 rig, however the Appliancesonline.com.au team went big in the hope the breeze wouldn’t freshen, and because there was a problem with the team’s smaller rig from yesterday.

Yamaha’s crew quickly set the pace on the short windward leg to the Clark Island mark and led Smeg by 15s, with another New Zealand team, Knight Frank (Riley Dean) in third place just ahead of Coopers-Rag.

Once again, the kiwi skiff showed her boat speed on the long downwind leg to Obelisk and Yamaha’s lead had extended to 1m over Coopers 62-Rag & Famish as the fleet headed back to the next mark in Rose Bay.

Rag’s downwind speed was impressive as she moved ahead of Smeg. Appliancesonline gained from her bigger rig and was in fourth place ahead of Thurlow Fisher Lawyers. C-Tech, Peroni (Nick Daly), Asko Appliances and Compassmarkets.com (Keagan York) were in a tight battle for sixth place.

Yamaha’s performance was impressive upwind and the team extended the lead marginally as Smeg and Coopers-Rag battled hard for second place.

The leading positions remained relatively unchanged over the next two legs of the course but the racing was fast and exciting as all crews drove their skiffs to the limit.

While Yamaha continued to show the way, Smeg continued to hold a narrow break over Coopers 62-Rag & Famish Hotel at Clark Island. The pair continued to provide spectators with some exciting racing as they raced downwind with only a couple of seconds between the two skiffs.

Coopers-Rag was again faster than Smeg on the long spinnaker run and she not only took over second place, but actually took out some time on the leader.

The two local teams threw out strong challenges to Yamaha on the beat back to Rose Bay but Yamaha’s skipper, Dave McDiarmid, was confident enough to hold his nerve and didn’t bother to cover the challengers. He did the same thing on the final leg to the finish when the pressure was applied again by the two major challengers,

“We were satisfied with our speed and ability to maintain the lead and decided to sail our own course,” McDiarmid commented later.

Monday is a lay day then racing resumes on Tuesday with Race 3 of the 7-race championship.

Can the locals come back from the two defeats so far, or will the Yamaha team make history?

A spectator ferry will follow each of the races in the championship, leaving Double Bay Public Wharf alongside the clubhouse, at 2.30pm on each race day.

All races will be live streamed from the Camera Cat and the drone, a world's first. Head to 18footers.com to watch the race live or catch up later.