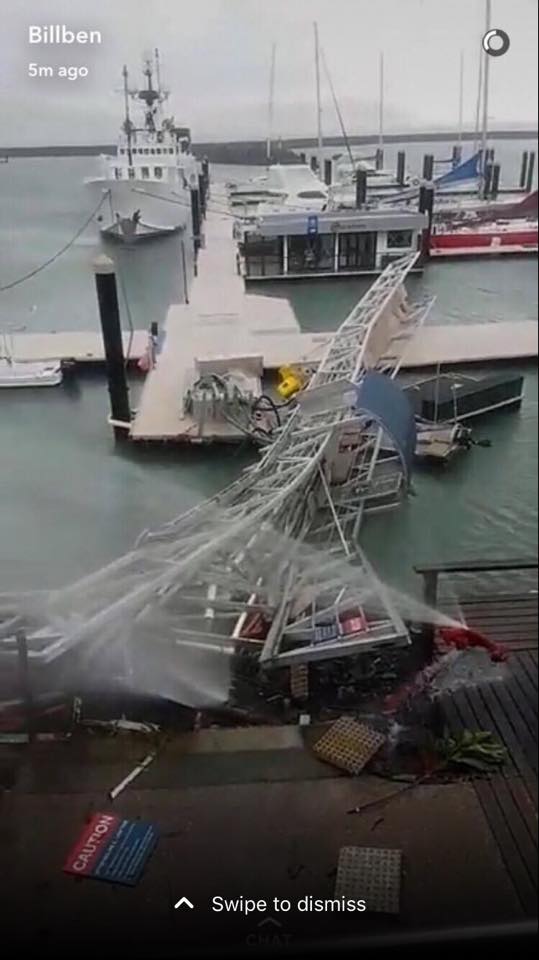 A marina arm at Airlie Beach lies devastated by the storm.

As Cat 4 Tropical Cyclone Debbie loses intensity and tracks south towards Brisbane, the Gold Coast and northern NSW, residents and visitors to the Whitsundays Islands, Airlie Beach, Mackay and other affected areas of northern Queensland are emerging from their homes to view the devastation.

While the mainstream media understandably looks primarily at the human side of the catastrophe, having assured ourselves that no lives have been lost among our sailing community, we have turned our attention to the boats that have been damaged or sunk.

The cyclone has been described as a “once in a hundred years event” and at its peak it threw winds gusting 263km/h (140 knots) at Hamilton Island. The slow-moving nature of the cyclone meant that these winds blew for much longer than expected, decimating everything in their path.

We don't yet have a final figure on the number of yachts lost. However, images on Facebook and reports from contributors and readers have shown damaged and sunken boats in both Hamilton Island and Abell Point marinas as well as yachts washed ashore when they broke their moorings. (Click on the image above to see more photographs. We apologise for not creditting the photographer in every case but it has been impossible to determine the original source of some images.)

Unconfirmed reports estimate 47 boats were lost at Shute Harbour, where the charter fleet has been decimated, while at Hamilton Island the estimate is eight to ten damaged, of which three are probably write-offs. With communications still dodgy and marina staff working desperately to save affected boats, we haven't been able to contact either Abell Point or Mackay marinas. Estimates at Abell Point are around 10 boats badly damaged, which out of 500 is a very good result. Reports from Mackay suggest waves in excess of 8 metres were recorded but the breakwater there is massive and was probably able to resist the worst efforts of the storm to wreak havoc.

Considering the extreme nature of the weather event, it is remarkable that more boats were not lost and that is in part due to improvements made at both marinas. At the extremely well-managed Abell Point, work has already begun repairing marina arms and helping affected boat owners secure their vessels. This is the statement published by management:

The clean up has begun in full today, with crews being able to access the marina for the first time since TC Debbie passed over the Whitsunday coast and island communities around midday on Tuesday 28 March. The category 4 system offered up destructive winds for over 24 hours in what has been classified as a one-in-100 year weather event. The dedicated marina crew are on the ground today assessing the damage, securing vessels and making every attempt to get the entire marina back in full working order as soon as possible. The conditions have now abated and we will take the next 48 – 72 hours to ensure the safety of the vessels berthed in the marina and the surrounding village facilities.

The power is currently out throughout the entire region, therefore our office is closed, however rest assured that as soon as we have power and water back on our doors will be open for business. We will remain in contact with our customers via SMS and email to provide updates on the progress of the facility. We will also make regular posts on our Facebook page as we have more information.

We would like to take this opportunity to let all our customers know that Abell Point is well and truly open for business. Despite any damage caused by TC Debbie, we will repair and redevelop so the facility is once again a first-class marina. It is at times like this the Whitsunday community draws together to show our strength and resilience.

We would like to thank all those who have contacted us over the recent days with messages of support and rest assured the hard work has only just begun. Our thoughts are also with all our tenants and commercial operators at this time as they commence their clean up operation and the resumption of business as usual.

A full wrap of the cyclone and the lessons learned from it is already being prepared for Cruising Helmsman magazine. However, there are two observations we would make from eye-witness accounts, viewing the attached pictures and from television reports.

The first is that the cyclone was a sailmaker's dream. Too many owners left their headsails on the furler, where they were shredded by the winds. They also increased the windage, causing the yachts to cant much further than they would otherwise have done. A report from Abell Point Marina noted that several yachts had tangled their rigging with the yacht next door, owing to the extreme canting, and this had brought down masts and broken boats free.

One eye-witness told us that the headsail on one yacht unfurled in the strong winds, causing the yacht to sail up on to the pontoon, breaking it loose and taking the neighbouring vessel with it.

Obviously many of the boats had been left in the marina while their owners were elsewhere and there are legal as well as practical reasons why marina staff couldn't attend to such matters. But the bottom line is that if a major blow is expected, get the headsails off the forestay, mainsails off the boom and if you have time, even remove the boom from the mast and lash it securely to the deck or inside the cabin.

My boat has not yet been caught in a cyclone but we did experience gusts of 75 knots while in the marina at Robe, South Australia, many years ago. At the height of the storm, a deck cleat pulled out of the marina finger and hit the boat amidships. Being aluminium, it simply made a dent but the stern of the boat was no longer secured by two lines, the other one broke and she skewed sideways at 45 degrees to the dock. Fortunately there was no neighbour to hit and I was able to winch her back into position and secure her to the remaining cleats.

In the photographs from Cyclone Debbie, it is easy to see that similar fate has befallen some of the damaged boats – a line has given way and the boat has swung into her neighbour.

The lesson from this is that “doubling up” means having two lines from each cleat on your boat, but make sure they don't both go to the same dock cleat.

We are hearing reports from the various insurance companies that they are sending assessors into the area and will attempt to get claims processed immediately, to help the owners out. That' great news and good customer service.

We would be interested to hear from affected owners about both good and bad experiences with your insurer – we all want to know who the good guys are.

Finally, in a related article the BIA is calling for volunteers to go up to the Whitsundays and help the various marinas repair the damage caused.

If you can help those affected by Cyclone Debbie in any way, please do so. Normal service will be resumed very quickly so if you have the chance to visit the region this coming winter, your business will be very welcome.